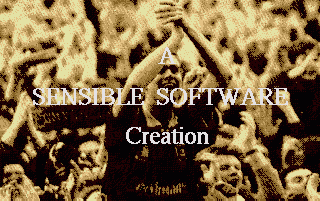 Another #1 hit by the Sensible crew ! 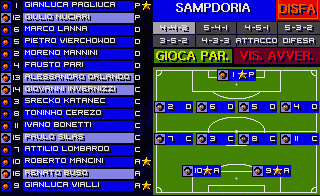 Choose your formation and tactics carefully, and remember who your star players are... 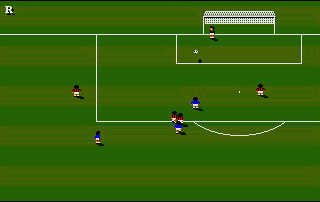 No, they aren' t gnomes, they' re football players, trust me on that. They may be small, but they still deserve your respect... 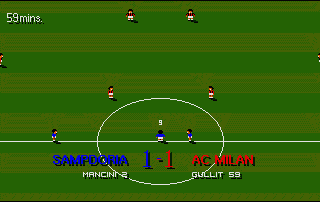 Players and stats are those of the 1992 season. 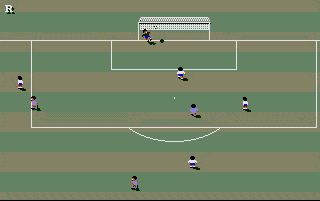 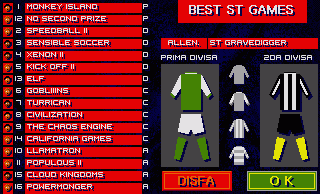 As the picture shows, teams are fully editable and customizable.

There was a time when soccer games were all the same. Yes, they could have good or bad graphics, horizontal or vertical scrolling, but all you had to do was push the ball forward and try to score. And the ball was pratically glued to the player's feet, no matter how fast you wiggled the joystick.

Then, in 1989, Dino Dini created Kick Off, soon followed by the excellent Kick Off 2, a game that set the standard for the years to come; the ball was no longer glued to the player, and ball control was a difficult art to master; and besides, the game was cool, fast and challenging, the best in its category. Until, in 1992, Sensible Soccer was released...

Not bad... they' re just like the Amiga version. There are some well drawn pitches, and the details are more accurate than in Kick Off 2. The only problem is that the players are REALLY small... you know Lemmings ? Yep, about the same size.

Original soundtrack: Captain Sensible! Music and FX: Richard Joseph (check out some of his great c64 tracks) ! But, honestly, the ST sound is not as good as the Amiga version. The intro tune has been severely cut, and there's no music on the menu screens. What a shame... good in-game FX though.

Superb. Fast, furious and challenging. The control system is not too difficult to learn, and the computer's AI, even if not perfect, is quite good. And unlike most soccer games, including KO2, where you could just run through the pitch with a single player and shoot, passing is the key to victory in Sensible Soccer; you'll need a good timing and an open eye on your strikers.


And when you've become clever enough to beat France playing with San Marino, well, it's time to play against a friend; and that's where the game becomes truly wonderful. I used to spend entire afternoons playing tournaments against my friends.


There are many teams; national teams, clubs, and even a lot of fantasy teams, all fully editable. You can enter one of the many available leagues and tournaments, or create your own; or just play a small friendly match. Nothing very strange here, but there's a whole load of options anyway.


Anyway, don't expect this game to be anything like real soccer... to my knowledge, the first game to look and play like the real thing was Konami' s "Winning Eleven" for Playstation. Sensible Soccer, with its fast and furious action, feels more like a pinball game, or an improved version of Pong.

...but it' s still great fun to play, and it's the game that set the standard for soccer games from 1992 to at least 1997. If you've never played it before, and even if you don't like soccer games, do yourself a favour and try it, you won't be disappointed.