Another motorbike racing sim, this one is actually quite realistic and features 3d graphics, 16 different tracks and the 3 different categories of the world championschip, i.e. 125, 250 and 500 cc. Let' s take a closer look at this game...

Uhm. Well, to start with, let me say that Thalion' s "No Second Prize" has much better, smoother, colourful graphics. Technically, Team Suzuki isn' t very impressive: the 3d engine is quite old, and the game runs at a pretty slow FPS rate - about as slow as Hard Drivin', to make an example, and sometimes even slower when there are many bikes on the screen at the same time. There' s not much to see on the screen, apart from the track itself, a few bikes, the sun and some terraces for the crowd; yet, it wasn' t so bad when the game was first released, and I' ve surely seen much worse 3d graphics on my ST.

You start with the classic, standard options of every self - respecting racing sim: choose between practice, a single race or a whole championship in one of the three categories. The gearbox is automatic in the 125cc. category, otherwise you' ll have to stick to the manual gears. You can choose between mouse (standard) or joystick controls, but the first choice is much more accurate and comfortable with a little practice.


Mouse controls are very similar to the ones in Hard Drivin': you lean the bike by moving the mouse left or right, accelerate with the R button and brake with the L button. The leaning is not very simple in the beginning, since you' ll probably start zigzagging like a bat on heavy drugs, but practice makes perfect... also, try to avoid obstacles and avoid going off the track, since there' s a limit to the amount of damage your bike can take.


After the difficult first approach with the control system, the game becomes very pleasant to play. The game is never too easy or excessively frustrating, and the 16 tracks provide a long, rewarding challenge.


The tracks are the real ones of the world championship. Each one comes with a brief description at the beginning of the race; Misano, for example, is a good fast track providing some stunning speeds, while Rijeka is a nightmare filled with bends, chicanes and corners. The tracks, even if not graphically stunning, are a quite accurate reproduction of the real thing.

"No Second Prize" is still the best in his category, but Team Suzuki scores a close 2nd. It' s a good, playable arcade game that also gives you the feeling of "being there" of a true simulation. Gremlin was famous for its good racing games, and this one doesn' t fall behind the standard. 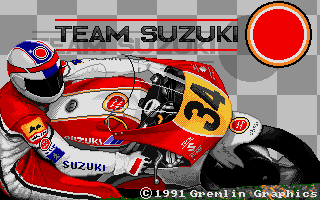 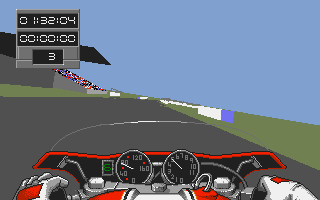 Read carefully the descriptions at the start of a race, they' ll be useful to get a good grip of the track. 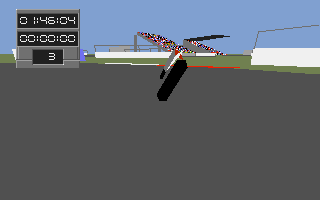 The art of leaning can be easy to learn, but difficult to master...