Adventures of Robin Hood, The

Adventures of Robin Hood, The 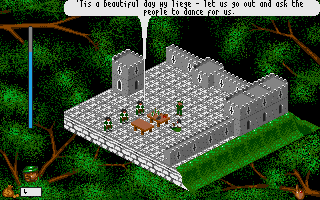 Robin enjoys his life of luxury, but the normans are about to kick him out... 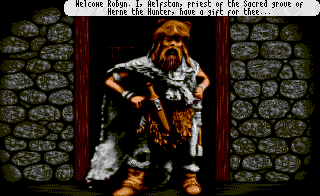 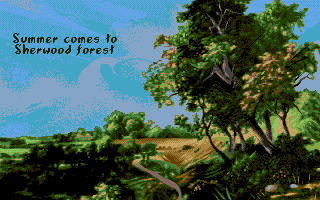 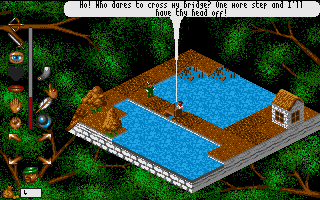 John Little, AKA Little John, a man with good manners and a strong sense of hospitality. 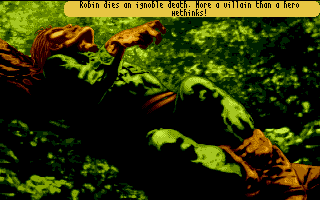 Not only you' re dead, but the people' s gonna spit on your grave. What a shame.

For those out there who never heard the tale of Robin Hood, here' s a brief summary: You' re Robin of Luxley, a young nobleman who' s been thrown out of his castle by the Sheriff of Notthingham and his norman soldiers. You must fight back, set up a gang of merrymen, conquer the heart of sweet lady Marian, steal from the rich, donate to the poor, all that stuff, kick some norman ass and get your castle back...

Not too bad, nor very good. The interface reminds of strategy games like Populous or Powermonger, with a square isometric 3/4 view of the map and a control panel on the left. The castle and its surroundings are quite well drawn, but the characters and sprites are really small and roughly animated.

Excellent... I mean, there' s just some average chip tunes and decent fx, but at least there isn' t any Bryan Adams track.

So, you' ve just been kicked out of your castle, and the game begins: you have a great deal of freedom on your next moves. You can chase lady Marian, meet Will Scarlett or Little John, attack the Normans and steal from the rich merchants; but you can also act cowardly, forget about your people and run away from the guards...


In the meanwhile, many events happen; beasts attacking the peasants, public hangings, announcements from the sheriff... any news will probably be bad news, and you' re supposed to do something about it. But don' t forget that the sheriff hates you, and a reward will probably be put on your head as soon as you start causing some problems.


Basic commands such as running, stealing, attacking etc. are performed using the control bar on the left; right next to that bar are some hidden icons that become highlited once you find the right items; there' s an orb that will allow you to see the whole map, a ring that reveals the people' s feelings towards you and the normans, a horn you can use to call your allies when you' re in danger, and many others...


The IA is quite good. Each computer controlled character has his own business to take care of, and each one has his own feelings towards you and the normans, that' s why a good popularity is so important in this game. The combat system, instead, could have been improved; you can only shoot arrows in front of you or fight with your sword, but once you' ve engaged a fight there' s little you can do to control Robin; either kill, get killed or run away as fast as you can...

A nice little game, with a non - linear plot and many things to do. Unfortunately, it' s a bit too easy and, once you' ve found all the secret items, the game is likely to become quite repetitive and boring. Anyway, it' s great fun - for a while.