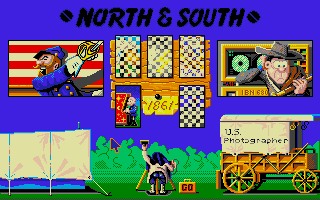 Bothering the photographer on the options menu. 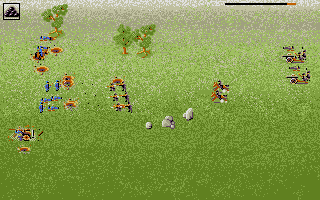 Sometimes you may want to lose a battle on purpose, just to make the game slightly harder... 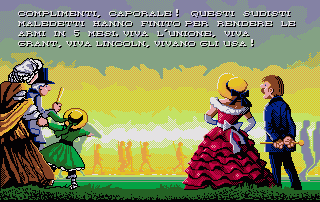 The South will rise again... one day, maybe. Today, it took me 10 minutes to crush it ! 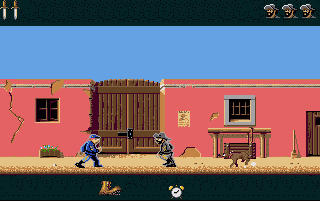 One of the two sub - games. Run to the end of the fort and capture the flag. 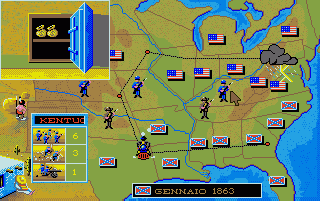 A train travels between the forts, bringing the money to add new units to your army

Based on a french comic, this is a simple arcade - strategy game set in the american civil war. Take the lead of the yankees or of the confederates and wipe out your enemy's army, but beware of the indians and keep an eye on the mexican bandits down south...

Visually, this game is really one of a kind. Very nice, cute, colourful cartoon - style graphics. There are 3 or 4 different battlefields, a well drawn map screen and many other little features. Pretty good animations, too, even if the sprites move a bit jerkily in the Fort and train assault sub - games.

This game squeezes the ST's Yamaha sound chip to feature some excellent sound; wonderful intro and ending tunes, and lots of convincing fx. There are many funny noises, too: for example, try clicking the photographer's bottom on the options screen...

Move your armies around the states, conquer your enemies land and wipe out its armies. Try to capture his forts and look out for the nasties indians and mexicans that sometimes wake up and crush one of your divisions. As I said before, it's a fairly simple strategy game. You won't have to think too much about tactics and statistics as you would, say, in Powermonger, but it's still a good game in its own way, very absorbing and immediate to play. But...


...there' s one thing that' s really wrong with this game: it' s far too easy. You could play with the south in 1864, when their armies were extremely weak, set the computer's AI to maximum, lose a couple of battles on purpose, and still get to wipe out the yankees in 20 minutes or so. The two sub - games are funny for a while, but soon they get slightly repetitive. The best part, actually, is the battle, but once you' ve had a little practice there' s nothing your enemy can do to stop your advance.

If it was still a full priced game I wouldn' t really suggest anyone to buy it. Actually, it's great fun for about 2 hours, but then it becomes really boring. 2 players mode is much better anyhow, and playing it with a friend solves all those damn AI problems. Actually, the game gets harder this way even if your friend has the IQ of an amoeba...