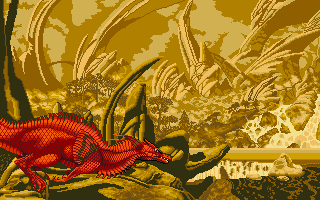 Wow, that’s actually a cool looking dragon, or is it perhaps a lizard. Anyway, it looks nice and makes a good title screen. 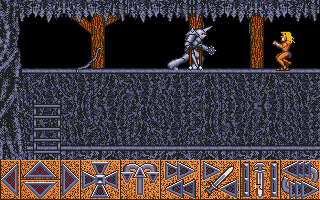 A big mean armour wearing dude. As far as I know, he’s impossible to beat and no, that’s not the bow behind him, it’s a fake one 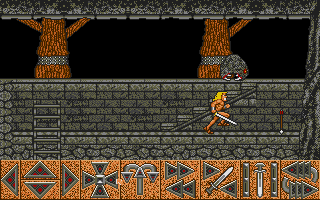 It’s not easy being a barbarian you know; here I am, strolling about thinking 'perhaps I should pick up that lonely looking arrow over there', and all of the sudden death strikes from above, literally. 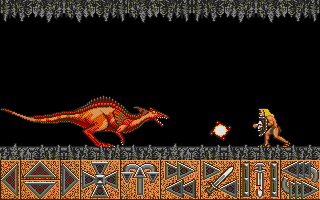 I have a Ye Olde Shyeld of Fireh Protection +2, so BRING IT ON, you oversized toaster. 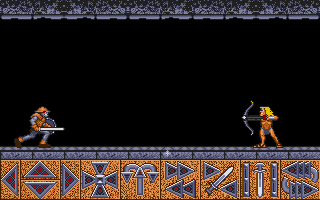 Redirect all power to forward phasers, lock on target … Fire! (no wrong game)... 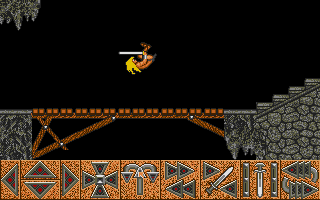 Making a giant leap over the bridge which is about to collapse, he’s pretty good at jumping for being a barbarian 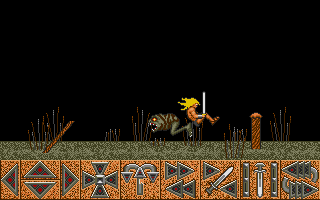 Sometimes it’s better to do the smart thing and jump over the monsters instead of killing them, but trust me, no matter how many mushrooms you eat, you’ll still eat dirt if you make contact with the slime things – this is to be taken symbolically as a statement of the game

The eighties are just the best, not only did they feature the launch of the Atari ST, not only did they feature the ninja boom. The eighties also featured the great barbarian film era, which brought us such sweet movies as Red Sonja and Conan the Barbarian. Barbarian keeps up this tradition good. Now don’t confuse this game with the game from Palace software, also called Barbarian, which is a fighting game. Barbarian from Psygnosis is a strange action/ almost puzzle/adventure breed of sorts. It’s somewhat of a love or hate game, but it was the game responsible for putting Psygnosis on the map.

The graphics are pretty smooth, especially for such an old game, but nothing really stands out. I actually had a hard time picking any good screenshots demonstrating the graphics, since it’s all basically dungeon walls, a blond sword wielding barbarian and some monster on a screen. The background is somewhat dull, but the monster design is nice, and the general look of the dungeon gives a good atmosphere. The animation department isn’t that great however. Each move has about five frames of animation to it, making it all a bit choppy. That doesn’t distract me all too much though.

This is where the game stands out. Our hero has an amazing array of grunting barbarian sounds. They totally rock! When he picks up something, he says something like “woa!”, probably an exclamation that despite his utter stupidity, he actually managed to pick something up. When the blond hero runs into a wall, he brushes it off with a “ouff!”. When the shit has hit the fan, he can run away and say something which actually sounds like “heeeaaallp!”. There are more which I leave up to you for your own discovery. There are some other sounds in the game as well, they are nice but not special. There is no music whatsoever. The sound effects aren’t that technically impressive, I just find them so funny...

This is where the game is different from most. It’s actually an action platform game, driven with the mouse. You see each icon controls an action, so when you want the hero to jump, just click the jump icon. Someone did some thinking ahead, to bad they didn’t think too much on the present. You sometimes experience lag in the controls, and on some rare instances, it looks like the command didn’t get through the thick barbarian brain since the game will completely ignore your click. With a right-click, you’ll access the inventory menu. The hero can do the usual stuff you’d expect; run, jump and attack. As a comic relief, the creators also put in a totally useless function, which makes the blond drop everything, turn around and run away screaming for help.


Aside form the usual action, the barbarian can pick up stuff and use. There are three weapons he can use over the course of the game; sword, bow and shield. The bow and sword are both weapons in the more traditional sense and kill stuff. The bow does it over distance but it costs arrows. The shield can also kill monsters, though it’s not recommended to use it as such, the thing with the shield is of course its ability to deflect certain projectiles and magic attacks.


The game also plays somewhat as a puzzle/adventure game. The sole obstacle isn’t just monsters to kill, but also collapsing bridges to jump over, swinging giant clubs to avoid and such. Puzzle game is probably to overstate things, it’s more like knowing exactly when to jump to avoid falling to certain death, without getting any hint of it all beforehand. It becomes the kind of game which you have to know by heart to be able to beat. The game is quite difficult, at least I think so. Since every death comes from bad timing or memory lapses and nothing else, it also gets quite frustrating.

It’s a game with a cool atmosphere, and it’s a bit different. It’s not fast, furious action, but a little slow and contemplative. However, it all gets a bit boring after a while, and extremely frustrating. With this package comes some bugs as well, that can sometimes destroy your game play. But don’t let this discourage you completely, just because it’s such a different and innovative approach to action platform games, it deserves a try, you’ll soon discover if you like it or not.