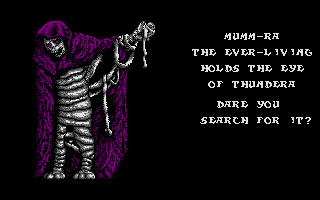 The story in the game is pretty clear, and as usual, plays little part in these kinds of games 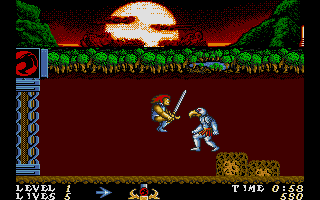 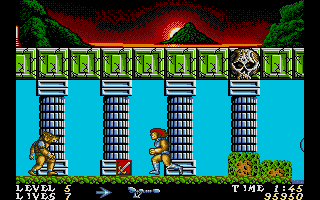 Ah, my sword! You can only have one weapon at a time, so choose wisely and don’t accidentally stumble into weapon power ups 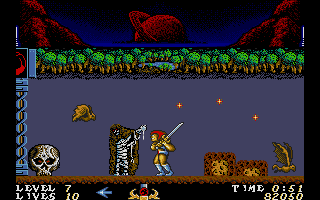 Hacking away at Mumm-Ra, I guess this is to be counted as a boss, but I don’t really know 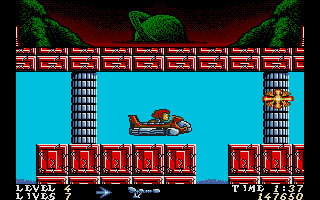 OK, I admit, it’s fun to ride the hover craft. 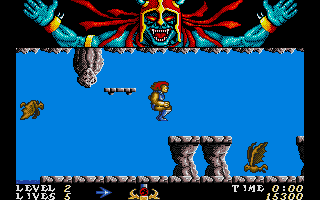 When the time runs out, Mumm-Ra transforms to his real self. What this means is that the upper border will change to Mumm-Ra in his more evil incarnation, and enemy respawn rate is somewhere about doubled

THUNDERCATS – HO!
These words should send shivers down your spine as you remember the excellent cartoon Thundercats. This cartoon started in 1985, and features 130 all cool episodes. The main hero is the sweet Lion-O, who is the destined leader of the Thundercats. Lion-O wields the mighty Sword of Omens, which has the powerful Eye of Thundera implanted in the hilt.


The planet of the Thundercats explodes in the first part of the show, Lion-O and his friends are the only known survivors. While in space finding a new home, they are assaulted by mutants who try to secure the Eye of Thundera for themselves, and forced to land on a planet called Third Earth. On Third Earth, there exists on old evil, called Mumm-Ra, the ever living. The mutants side with this evil Egyptian mummy-pharao-ripp off-cross breed, and they now all seek to take the source of the Thundercats power.


The show is on the same level as all 80’s American cartoons, like Transformers, He-Man etc, with stupid moral guiding comments and forced laughter… poor voice actors, I so pity them, but listening to some outtakes of the show, it actually seems like they’re enjoying themselves. I wonder why they never showed Japanese animation instead, it’s so superior.

Graphics aren’t exceptional, yet not bad either. However, they do get boring and repetitive, I think there are about three different level tiles, and then they just swap the palette. The fact that the real playfield is about 2/3 of the screen (upper part being some planet like border, lower part being scores) lessens the experience.

Music by Rob Hubbard, the genius behind Delta, Goldrunner and other legendary tunes. The music is excellent, fantastic; you’ve got to listen to it! To bad it’s only for the intro screen. During the game, you have your normal half hearted sound effects of things dying and weapons sounding.


Thundercats is a normal side scrolling jump n’ run game. You have access to two different weapons, either the Sword of Omens, without the Eye of Thundera so don’t expect any laser beams, or a laser rifle. The laser rifle has the ability to shoot some distance, but is generally really bad since it doesn’t allow for the greater hit area the sword does.


While you try and make it from one side of the level to the other, you are assaulted by two different creatures per level. These creatures may look something like the enemies in the show, I can’t remember actually. All in all, enemies are plain and do little except travel across the screen and collide with you, AI is non-existent.


This game is horrifyingly hard. Two levels into the game, you’ll get to choose what element you wish to travel through, and I thought when you finished all four, that would be the end of the game, but noooo, it’s 14 levels long. I remember as a kid almost breaking into tears from frustration. Now I just cried my throat sore. I dub this game impossible to beat without the save state function of modern emulators (which is not how I like to play my games).

Thundercats is another game that bears a famous name, and borrows a sprite or few from some well-known source. When will people learn that this does not make for a good game? But still, there’s something special about this, impossible to put my finger on. Perhaps it’s noSTalgia speaking again, can’t say, but something about this game just feels right. That’s one of the few things the show and the game have in common; both really suck big time, but there’s something undeniably special about them.