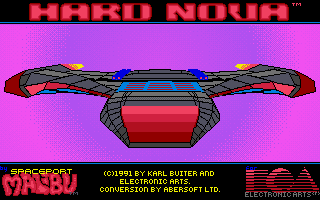 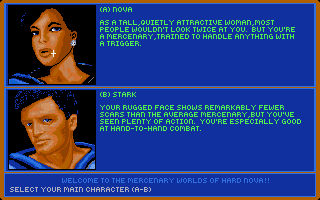 Choosing main character… for me, this isn’t a choice; even without the title, even without the manual introduction calling you Nova, I’d still play an attractive sci-fi goddess over a sluggish bar fighter any day. 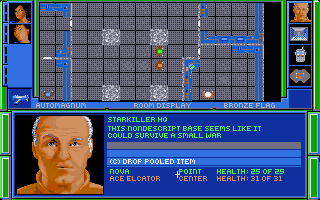 Just hangin’ out at the mercenary HQ, there’s always something up. 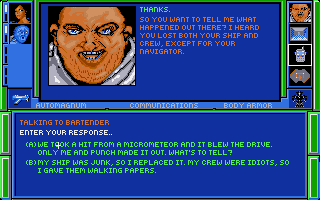 The game features sampled speech for every important character in the game … just kidding :) 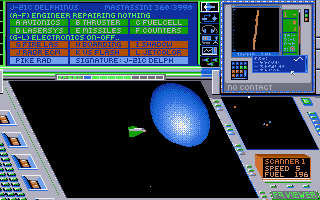 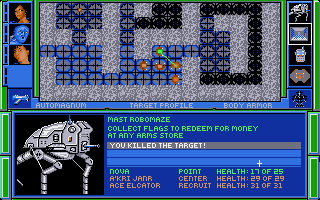 The heat is on, keep your weapon tight and fire. 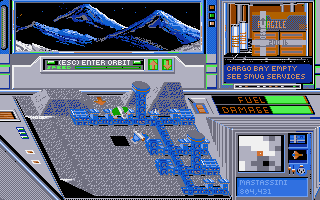 Piloting your hovercraft, almost no time is spent in this mode, which is between ground and space.

There aren’t that many RPG’s for the ST, fortunately, it has some of the best. Hard Nova is one of these; one of the finest RPG’s I’ve played even though it for some reason is quite overlooked. Hard Nova is the half-sequel to Sentinel Worlds, if you’ve heard of that game, also designed by Karl Buiter. I remember getting this classic for Christmas ages back, probably in -92 or -93. Back then, the manual felt enormously thick and the map gigantic. Now when I look at it, the manual feels like a quick install note and the map more like a pamphlet, time flies…


The stage for Hard Nova is a portion of the galaxy called “the Four Systems”, named so because there are four major star systems each with two planets, all tied together with three stargates that allow travel between them. The story begins six months after you’ve lost your entire crew (except your stargate navigator), after sobbing and drinking away the memories, it’s time to find another crew and start life over. After all, you’re one of the best mercenaries in the galaxy.

To keep it short, not that nice. When you walk around down on a planet, you see things top-down, which means people are dots with resemblances of arms and legs. The game sports cool mug shots of people that are enjoyable, but nothing more. In space, you fly a little tiny sprite in isometric mode.

There is an intro tune that’s not bad, but only plays when the game loads and when you jump between systems, which is not that often. Amazingly enough, the credits still mention three people connected to the sound, one of them legendary Rob Hubbard, though I think they just borrowed his music replay routines. Sound is your average blip and blop that tells you something has happened, but you wouldn’t really know what just by hearing it.

Like always in RPG’s, this really is what the thing is about. You collect characters and add them to your party over the course of the game, but your main character is of course the most important one. Your characters have an array of skills, ranging from basic combat skills, to more miscellaneous ones such as stealth and fitness, to technical ones like programming.


The game really plays in two modes, in space and on ground. In space you can fire at other ships and do cool tricks like decoding other ships signatures and disguise yourself as them. My favorite thing to do is the boarding option, which lets you board another ship (and go into “ground mode” on that ship). On ground you do the usual stuff, walk around, talk to people, shop and kill lots.


The plot is both very open, and somewhat controlled. You have total freedom to do what you want, but the generic missions are pretty boring and only involve smuggling. There are some scripted missions to receive from the mercenary HQ, and some other missions that you pick up when you go about exploring. After a while a main storyline starts to develop which smoothly picks up from the introduction (that is a complete puzzle until you get into the game). There are some very diverse elements in the storyline, concerning politics and other things. There is never lack of things to do, and it doesn’t get repetitive either.

This is a very solid RPG, dense storyline; still lush enough to give you space to move. There are many different weapons and crewmembers, and much conversation to be done. Drawbacks are that the great engine isn’t really used the right way. After a while crewmembers become quite inferior to your main character, which puts down focus on crew development, and missions may sometimes feel a bit stiff in the solution (but that’s a problem almost all games suffer).

I definitely can recommend this game to any RPG fan, especially if you’re looking for a game with quality and find yourself frustrated by modern RPG’s. This one is an undying classic that more people should discover and enjoy.