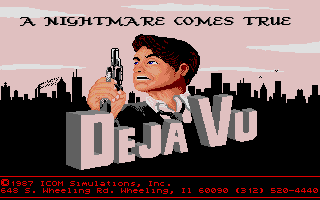 The adventure begins! ahhh … look at the cute bee working 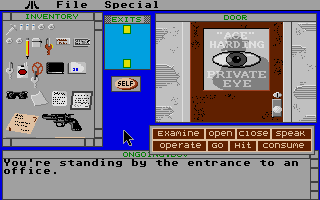 It’s a film noir graphic adventure, with a static feeling 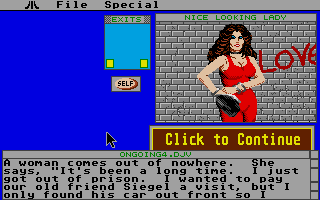 The game does offer some feasts for the eyes 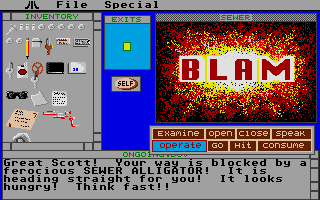 The sound is seen, not heard 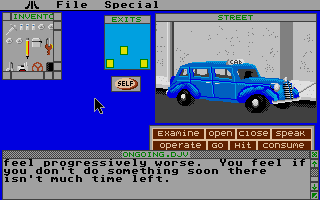 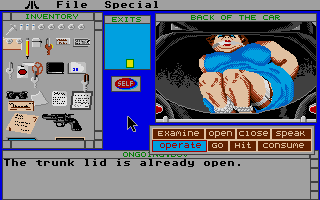 The story is rather intriguing, Memento anyone? 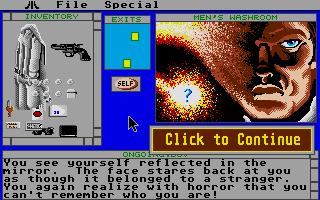 The show ain’t over ‘till the fat lady sings

This is one of the big three, as far as I was concerned. The other two being Uninvited and Shadowgate. Three graphical adventure games that felt really good and cool, each one with it’s own strength. In retrospect though, all three pretty much suck, however not compared to other adventure games of their times. Does it show I’m not all that fond of adventure games? I’ll try to be fair.


When ICOM made this for the IBM, it was in a way a milestone. At the time most adventures were text driven, Sierra had just released King’s Quest 1, and we all know what that game is like (if you don’t know, play it; it’s part of common knowledge). Déjà Vu however featured mouse support (some poor IBM user’s didn’t even use mouse back then), a graphical interface with multiple windows and drag ‘n drop way before Windows ever got there. On the Atari however, this had already been done so the game wasn’t all that revolutionary.

Pixel painting in it’s earlier days. Each scene features a static picture, there is no animation whatsoever, frame rate depending on how fast you click. The graphics does the job of putting a face to the world though, the pictures are meant more as a support to the text rather than to tell the story on their own (something for Cryo to think about).

No music, only occasional sound effects, not bad ones though. This is more the game were you sit late at night and click away at stuff getting involved in the story line rather than turn up your surround sound.

There are lots of objects to interact with, you can look and touch most of the stuff you see, usually to little effect unfortunately. The whole game engine is really good though, with powerful interaction capability and the coolest thing I ever saw; an auto clean up for your inventory!

The game is driven entirely by story; you wake up with no memory whatsoever. During the game you’ll encounter bits and pieces of what’s happening all told through pretty cool flashbacks. The only problem with this is that the game becomes almost an interactive movie, there are hardly any puzzles and when I played it through I felt that all I did was collect items and read story text. It may be that I remembered too much of it from when I played it as a kid. Perhaps discovering the story is itself a puzzle, and a rather enjoyable ride if you’re into these sort of things.


The game suffers from some horrible things like a certain area that just gets you killed and servers no other purpose, time that runs out, money that runs out (I think there’s a way to solve that problem, but had to replay the game and skip certain areas because my tax money ran out). Still, all in all, it’s worth trying, you’ll pretty soon figure out if you like it or not. This one is an undying classic and classics are classics for a reason!