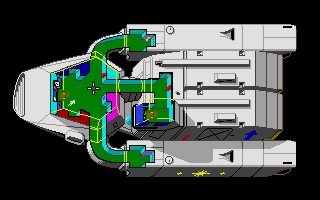 This is your ship, take a tour, seat yourself in the command chair, jury rig the engines or just grab a burger from the closet. 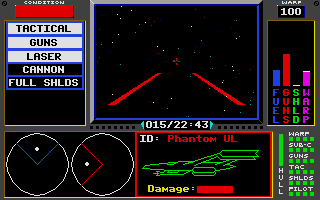 Sound comes rarely, this exciting event will produce a sound almost reminding me of a laser cannon, and a “plunk” if the enemy gets it. 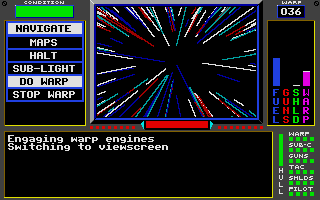 Going into hyper space, not the acid trip given by Captain Blood. 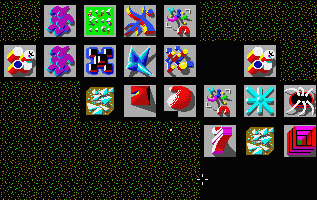 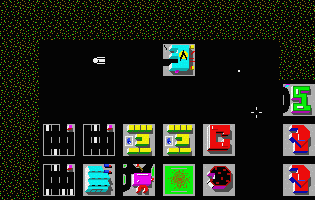 Touring the planet, yes, that little white dot is actually you! 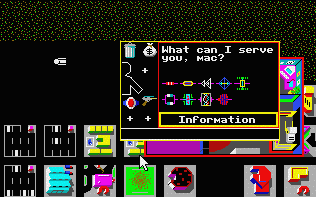 Buying some more spare parts after getting hit by space pirates 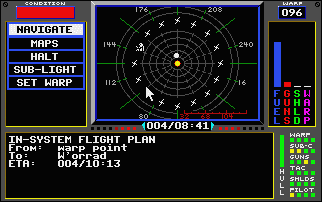 Ah, FTL: they didn’t do to much for the ST, but what they did they did with class. This game is one of the earliest space simulators, and I’m sure it broke lots of new grounds when it was first released. Very comparable to Elite, but with more depth; you can say it’s Elite gone RPG.

Well, *cough*. The graphics aren’t exactly good. Actually, compared to most other games on the ST they are bad. However, this is an old game, from the earliest days so what do you expect? The graphics don’t have to be all whippy though since this is a space simulation game, the purpose then for the graphics is mainly to be informative, which it is; there is never any trouble to see what’s going on or get immersed in the action.

The sound is almost non-existent. There is no music. Only a few events in the game will trigger a sound effect that is so bad you almost wish they’d have kept the game silent.

THIS is what it all boils down to, after you’ve read about the bad graphics and sound, you probably don’t even want to consider the game anymore. Time to change your mind. Like Elite, you can fly around in space dealing with goods, but unlike Elite, you can also go down to the planet and even walk around in your own ship!


These sub systems all consist of four “power routes”, if a component in the power route breaks, so does the power and the component will have to get replaced. This adds horrible realism as you in the middle of a firefight may feel the need to run from your chair, tear open the spare part locker, run down the corridor to the weapon system and try to insert a new control node. You can also find special components, that give one specific system extra power (such as a cloaking device … “Impossible [you think] no ship that small has cloaking device”).


When your hands get all oily and you’re out of spare parts, it’s time to hit down town and hear the news on the street. Now the so called “zoom action” part comes into play. When you walk into a building, you will “zoom” in on the “action” and see a square with some bar folk or whatever. There are three different shops: bars, weapon shops and component shops. The same can happen when you’re out taking a nice nighttime stroll, and you’re jumped by five junkies who want your credits for their own use!


Let’s say you decide to hit the bar:

The bar man looks up as you nonchalantly walk into the place. The lighting is somewhat gloomy and your guess is that it’s not so much to set the mood as to protect the privacy of the customers. By the reaction of the closest patrons, you realize that you don’t blend in as good as you thought. To re-assure yourself you squeeze the handle of the new scattergun you just bought.

“So, what can I get you mac?” the bar man puts some extra shine on a glass, you wonder if they always do that.
“Information” you try to sound at least a bit cool.
“Information is also something you pay for” you can see in his eyes that he’s connected and used to these sorts of dealings. “Are you buyn’ or sellin’?”
“I’m looking to buy something, I’d like a cloaking device” you say while flipping up a few credits on the counter.
The bar man grabs the credits faster than your eye can follow, “sure, just wait in the booth over there, I’ll send someone over”

You head over to the booth, what else is there to do? No one really looks up but you have the feeling they’re watching you anyway. Soon a man sits down in front of you, he puts a strange brown device down on the table.

“Heard you were looking for one of these, let’s cut to it, 6500 creds straight up”
You lean slightly forward, just so your jacket slides up revealing the shining new scatter gun.

“How about 6000, and we remain friends?” you know it’s a dangerous game to threaten someone on foreign territory, but you just can’t spare the extra creds.

The seller looks a bit irritated, “ok, sure deal” he says.

You relax just a bit: it worked. Now you can ship out those class A biochips without the pirates noticing.

Sure, this was dramatized, but it can happen just like this. After some hours of playing though, you’ll get more dulled than thrilled of the realism. Granted, there is variation, sometimes you’ll have to bribe the bartender and sometimes not, but it all boils down to repetition after a while (but tell me a game that isn’t like that).


Trading in goods interplanetary is a bit clumsy. The whole back part of your ship is a “car” with two storage bays. You can either store extra fuel or, some goods. In order to buy these goods, you’ll have to take the car out for a ride, find the store (there is only one in each city) and then buy the stuff you want. How on earth you are supposed to know prices and so on I don’t know. You’ll just have to go everywhere and record prices in order to know.


Yes, you can get a parking ticket if you don’t watch it, and while you’re heading for the bank to pay the ticket, you can be jumped by thugs who steal all your money (unless deposited in the bank of course).


Space travel is fairly easy, just click on the planet or system you want to go to. If you want to go to another system, the warp engines will begin to charge. Now is the time to move out of the system, going to anyone of the warp points that surround each system like a circle. The closer you are to a warp point, the greater the chance of making the jump. So if you’re jumped by pirates while traveling to a warp point, you can still hit the warp button and pray to the intergalactic travel God that he will grant you warp speed, otherwise, you’ll have to fry the pirates.


Space combat by the way, works just like you could imagine. It’s a matter of trying to hit the other ship with a little cross-hair. During combat, your ship will get damage and parts in your sub-systems may be damaged, so be sure to keep extra parts. You can also spend extra fuel to charge up the force shields, which will take some pounding off the hull and prevent components getting damaged.


Aside from all the repetitive trade, travel, kill, you also have a main quest. A relative left you your ship: the Sundog, but also left you with a trading contract. You are supposed to supply a colony with goods (and also find the missing colony people who are in cryogenic chambers all over the place). You’ll find this colony on the surface of the first planet you are on. Just take the car out for a little hike and you’ll eventually find a place with just two buildings, one of them telling you what you need to ship to the colony. I suggest some trading first though, before even trying to collect the stuff for the colony.

The game has lots of cool features, and is groundbreaking in many areas. The realism is a real kick and I’m particularly fond of going to the bar to make an underground deal and the ships sub systems. All in all there is a feeling of freedom and realism seldom found in any game. The downside is that it gets a bit repetitive and slow after a while. I get frustrated over having to watch the landing sequence, which not only looks really bad, but is slow as hell. Still, this game is extremely special and you definitely should try it out unless you are an enemy of the genre.