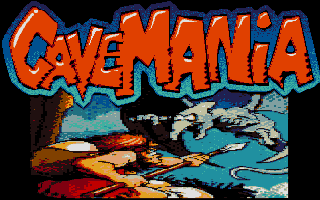 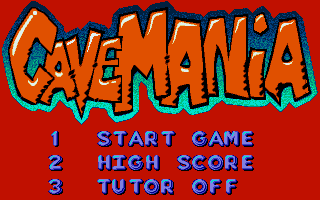 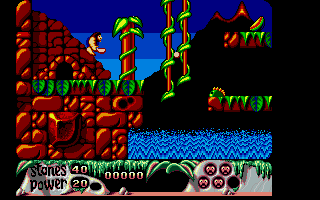 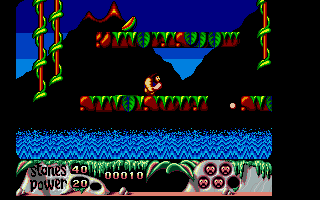 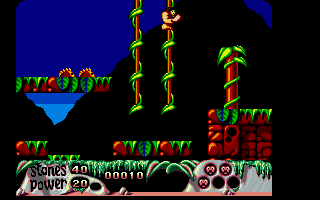 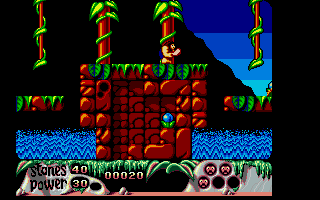 bullis1
Okay, as far as I can tell this is a simulation of being a deaf caveman... during a rave party. Why would I say this? Well, let me explain.

Problem #1 is the aforementioned rave that's always going on. The scenery flashes constantly during gameplay for some reason. It's kind of tough to explain really. I'm playing this game on an NTSC machine instead of a PAL one, but I've only seen this effect in this one game. It happens in all versions I've tried. Now it's super rad that our caveman hero gets to party out and get high on dino eggs, but I guess he's deaf from too much loud techno 'cause there's no tunes to be heard. Yes, this game suffers from the infamous lack of music that can be found in many older computer games. However, this one goes even farther and doesn't include a title tune either.

So, the lowdown on this game:
+nice graphic style
+fun gameplay
-I couldn't enjoy either because of the flashing
-no music, minimal sound
-bad-looking title screen

Now, despite my issues with this game, I enjoyed it much much more than that overrated troll Chuck Rock. The premise of searching for eggs and then having to backtrack to your cave was actually quite fun. You should try this game out and hope it doesn't have the flashing issues on your machine.

As for me, I'll just turn off my lights, blast some breakbeats, and share some P.L.U.R. with my cavemaniac buddy here.