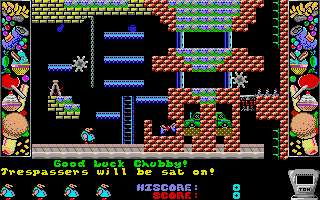 One of the many 'hilarious' room titles in Chubby Gristle. 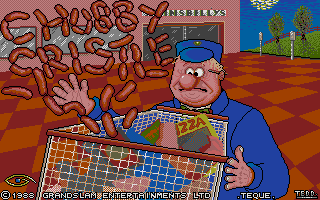 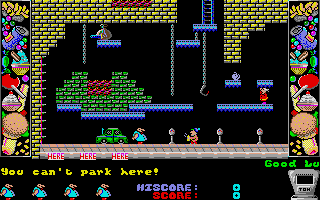 Inspired by the classic where it all started .... Monty Mole!

Teque have created some cracking games, over the years. For the ST, they produced Escape from the Planet of the Robot Monsters, handled the port of the sensational Laser Squad and produced the RPG, Shadowlands. Back near the dawn of time, during the 8-bit days, and when Teque were just part of Gremlin Graphics (and not actually called "Teque"

this is the team that gave us Trailblazer, Bounder, and who practically defined the platform and ladders arcade adventure with the Monty Mole series.

Chubby Gristle is a game following much the same style, although instead of a Mole we have the eponymous Chubby Gristle, traffic warden. Chubby is on a quest to gain as much weight as possible, by eating everything in sight before waddling off into the sunset with the love of his life and living happily ever after. Bless.

So it's a game style that the developers have more or less mastered previously, Auf Wiedersehen Monty being the finest example of the genre, to date. Have the boys at Teque improved upon this crowning achievement?

When you've produced the best game of its kind, it doesn't make sense to produce another, in the same mold, but which seems a few generations behind both in terms of design and gameplay, but this is exactly what's been done here. It's impossible to review Chubby Gristle without comparisons to the previous hit, and these comparisons are not favourable.

Add to this the fact that Chubby Gristle is very much a one joke game, and that the joke isn't particularly amusing to begin with. Yes, he's fat, mean, and eats a lot. We get it. Rumour has it that this game was modeled on a real traffic warden near the offices of Teque. Word to the wise - a half meg in-joke may amuse you, but is likely lost on the public at large.

Catchy Ben Daglish tunes are pretty much a given on any title from this group, and this game is no exception. No sound effects, but a tune, which you may catch yourself whistling, plays throughout. And loops... and loops... and loops until you shoot yourself.

I understand that perhaps this game is trying to recapture the feel of the classics, but that could be done while still making use of the ST's visual capabilities. These look like slightly touched up Spectrum graphics! It even seems that the scenary is built from 8x8 character squares. There's no reason for this, other than perhaps some laziness. This game was released for many formats, from the Spectrum 48K on up, and virtually the same graphics may well have been used for each.

The opening screen is no better, it feels like it's been ported from an 8-bit machine, as each badly drawn letter appears on the screen at once and moves to spell out the title.

Auf Wiedersehen Monty was an amazingly well designed game. While it was very difficult to progress with the game's main objective, exploration was easy and there was a terrific sense of freedom. The individual rooms were challenging, but never too hard, and but for a few notable exceptions, the game was pretty fair.

Chubby Gristle is much smaller, much more linear, and punishingly difficult. The feeling of enclosure isn't helped at all by the fact that in this game, you can die from any fall but a very short one. Death often comes so quickly that you find you're still holding the joystick in the same direction when you reappear, swiftly getting killed again.

The puzzles are very straightforward affairs, as when you reach an impass, it's really just a case of doubling back and picking up all the objects you missed until you can proceed, again.

Enemies are quire deadly on contact and virtually every room is about slipping past them through split-second timing, often enough you have a very small amount of space to work with and will die with alarming regularity.

Growing up, I was a fan of Peter Harrap's games, but Chubby Gristle just doesn't do it. We evolved beyond this sort of gameplay in the mid-1980s, and this is a throwback. The de-evolution of a branch of computer gaming that has produced so much better.