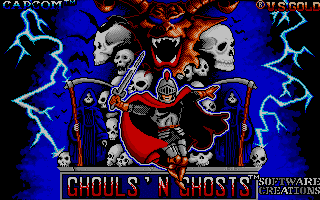 The rather nice looking loading screen. Which is soon replaced by the off-center text of the main menu. 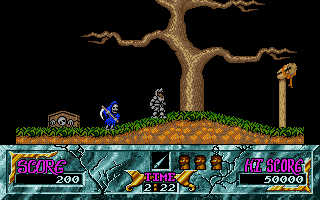 Starting out, shoot the hooded bad guy and proceed to the right. 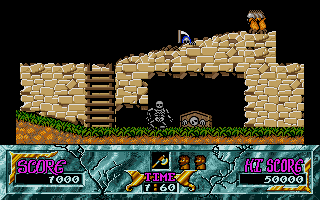 I'm not convinced the screenshot guy made it past level one... ;)

I must preface this review with a disclaimer.

I don't normally play (or even review) arcade conversions for the Atari ST, or indeed any system.

In their day, coin-op conversions were all the rage, and rightly so. It was cause for excitement to hear that you were able to play a version of Afterburner or Altered Beast or R-Type in your own home, without a stack of twenty pence coins at your side; even if the end results were of somewhat mixed quality.

Today, we can emulate just about any system from the 1980s and 1990s, and that includes arcade machines. Whereas once the closest we could get to bringing these smash hit games home with us was a version for the ST or Amiga, now we can play a pixel perfect recreation on demand.

Which illustrates my point - as a games player, I no longer care how brilliant the ST conversion of say, Pang, happens to be, when I can play the arcade original with just as much ease. Anything else is going to pale.

But having said that...

Ghouls 'n' Ghosts is different. It's hard to put a finger on exactly why, but this is a rare case in which I prefer the ST conversion to the arcade original. It's not that there's anything wrong with the arcade version, it's slick, it's well designed and it's a lot of fun to play, and it's not that there are no faults with the ST version.

The ST version of Ghouls 'n' Ghosts is, bluntly, full of faults. From the "Continue" screen that mis-reports the number of credits remaining and eventually displays a corrupted graphical blob, to the wide variety of gamplay glitches. One level contains a group of enemies that simply can't kill you, while the next randomly spawns monsters ON TOP of the player with no warning and no way to avoid them. The collision detection is varied, overly forgiving in some cases and massively unfair in others. There's a great many "What killed me?!" moments and there are quite a few graphical problems which shall be covered later. Yes, it seems this title was rushed out of the US Gold gates with little real testing, and it has a number of problems high enough to kill most games dead. Somehow, though, they don't.

This game has that certain something that keeps you coming back. But what is it?

It could be the beautiful Tim Follin soundtrack, each level (excluding the final confrontation) has its own tune, although level five borrows from the title screen. Each track is unique, haunting, and a work of chiptune genius. It has to be said that the music for level three, in particular, is quite probably my favourite piece that the YM-2149 chip has ever produced. If you choose to play without the accompanyment of Mr. Follin (You fool!) then some decent spot FX play throughout the game, although comparitively, they're nothing to write home about, they do their job nicely. Wonderful sonics, though, do not a great game make, and however much they enhance the experience, the brilliance of this title must lie somewhere else.

Oh, what a mixed bag! The sprites are all recogniseable renditions of the originals, although universally somewhat more squat, and as is the case with all the game's graphics, of differing quality. The player sprite itself is middle of the road, not terrible, but not the best the game has to offer, either - which is a shame as it's the one to which you're paying the most attention, for the entire game.

Some of the sprites and scenary are wonderfully drawn, while others seem hurried, and in some cases are even drawn with the wrong colour palette! Others merely look like they've been drawn with the wrong colour palette, the enemy death explosion, in particular. The wild contrast in graphical quality is another indication that perhaps this game was rushed to meet a deadline. Nothing is distracting, but the inconsistency certainly shows up.

Obviously the lush (animated) backgrounds from the arcade machine are missing, but this is no fault of the conversion, I wouldn't have expected them to remain.

Ahh! Where the game shines. If you've never played Ghouls 'n' Ghosts, a brief description may be in order, at this point.

Ghouls 'n' Ghosts is the sequel to the popular arcade hit, Ghosts 'n' Goblins and follows pretty much the same style of gamplay. The plot is the much cliched "Princess/Girlfriend kidnapped" story, and to get her back you run through a number of scrolling levels, throwing your sword (or a number of other pick-up weapons) at the spooky monsters and encountering a boss at the end of each stage. You can survive a single hit, which will destroy your armour and leave you in your underwear. Make contact with another enemy at this point, and you lose a life.

It's not all bad news, however, treasure chests pop up along the way, and if you open enough of them, you'll eventually find a special weapon, the effect of which varies depending on your primary weapon at the time. Of course, nine times out of ten when you open those chests, a wizard jumps out and turns you into a duck...

This game is HARD. It's pretty much a faithful recreation of the arcade, although the feel is a little different. Much of the challenge comes from the fact that only one restart point is provided, halfway through each level, and therefore you're going to be sent back a long way, each time you lose a life - even if you're fighting the level boss. This would make any game significantly more difficult, but the levels are tough to begin with. Monsters always seem to fly onto the screen at just the right angle to make your life a misery and you wind up spending many hours trying to beat a single segment of a level.

Thankfully, the difficulty of the game is really just something of a learning curve. Once you get the hang of dealing with a specific challenge or set of monsters, it will slowly become second nature, and areas that before you found nightmareishly difficult you'll start to play by reflex.

It's probably the difficulty that gives Ghouls 'n' Ghosts its "Just one more go!" factor. You find yourself progressing a little further each time, and you just know how you can get by whatever it is that just killed you. These are all comments that can be made of pretty much any version of the game, but despite vast technical inferiority, the ST version just hooks you more than the machine that inspired it. Or at least, it did me.

So there you have it - the ST version just has that unique feel to it. It's not something that you can describe, or rationalise, or quantify. This conversion just oozes playability from every byte, and it's one of those rare cases where you can't quite work out why.

Download it. Play it for a little bit. Get frustrated as the whirlwind creatures on the first level kill you for the thousandth time... ...and just watch the hours fly by.