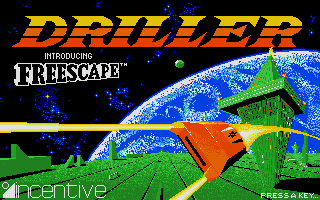 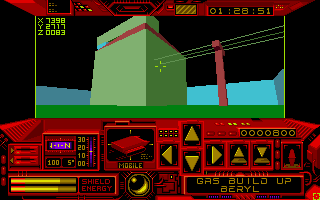 One of the more logical puzzles. If you want to disable the laser beacon at the front of this building then you'll need to take out these power lines. 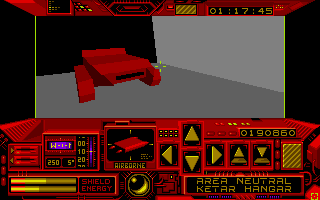 A rare external view of the excavation probe, the vehicle that you'll spend the majority of your time in, in Driller. 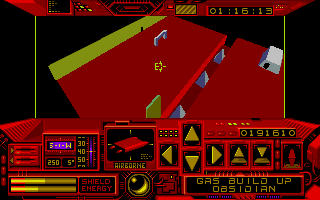 The Reconnaissance Jet can provide a nice vantage point high above Mitral's surface. 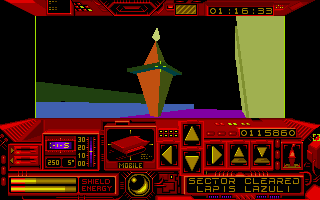 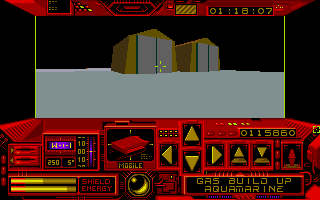 Good job, you've found the hangars. Inside one of these sits the Reconnaissance Jet. 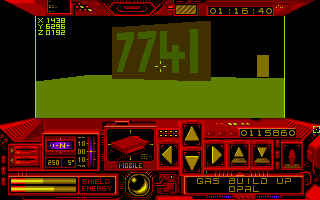 When George noticed his bank account was empty, he asked himself why he ever put his PIN on a billboard to begin with.

That is of course Michael Jackson's "Driller", the song he wrote after playing Incentive's eponymous 1988 3D adventure game. I caught up with Michael at the Neverland Ranch...

JRC: Michael! Good to meet you. Congratulations on the acquittal.
MJ: Thanks, but my lawyers have advised me not to talk about that. And besides, I'm here to talk about Driller.
JRC: Yes, do tell the readers about the game. What's it all about, then?
MJ: Well, in Driller, a group of outlaws have been mining Mitral, a moon of Evath. Now there's explosive gas trapped under the 18 giant mining platforms that cover the moon, and a meteor is going to impact in a number of hours. This will cause the gas to explode, eliminating the moon, and throwing Evath out of orbit, which will kill the population.
JRC: Gripping stuff. Won't some brave hero step in to save Evath?
MJ: That's just who you play in the game. Given control of a excavation probe, you've been sent to the moon and must deduce the best place to drill on each platform. You can then beam in a rig which will extract the gas. Don't worry if you drill in the wrong place, you can recall the rig, although this costs precious energy.
JRC: Uh oh. Only a finite energy reserve?
MJ: Finite energy, finite shields. Thankfully the moon is replete with Rubicon crystals that you can shoot to replenish your supplies.
JRC: Sounds straightforward enough.
MJ: Oh, anything but. While you're free to explore every platform on the moon, you'll find that access to some is limited unless you complete certain tasks. There's an array of switches, puzzles, buildings, and even laser beacons and airbone skanners which shoot at you.
JRC: Good grief! It sounds like quite a challenge.
MJ: Yes, it is. In fact, in court, I comforted myself by thinking "At least there isn't a Ketar Laser Beacon draining my precious shields". But I can't talk about that.
JRC: Is there any help for the player?
MJ: A little. The player has a laser cannon for defense, and if you're lucky enough to locate the Reconnaissance Jet you can explore the moon from above. The Jet comes with a cost, though - the cost of the Probe's armour and ability to drill.
JRC: Okay. Now we know a little bit more about the game, why your interest in it?
MJ: I wrote that song in honour of this remarkable game. Introducing the Freescape system, you're presented with a world within which you have complete freedom of movement. You can travel in three dimensions, view objects from any angle, get above, below and inside things. Truly remarkable.
JRC: Um... can't you do that in just about any 3D game?
MJ: These days, maybe! But Driller came out in 1988. It was a first! Who knows if we'd have our Quakes, and Unreals, and Grand Theft Autos if Driller hadn't paved the way? Remember that as you explore Evath's moon.
JRC: Could you please stop doing the Moonwalk, every time you say the word "moon"?
MJ: No.
JRC: You're a weird guy, Michael.
MJ: Get him, Bubbles!

And as I fled the property with a rabid chimp in pursuit, I decided that perhaps I should revist Mitral and find out if Driller really was everything that Mr. Jackson had said.

Really, it's not. That's not to diminish the significance or importance of this game. You see, Driller and the whole Freescape system was a revolution in 1988. An immersive environment with total freedom of movement; It was incredible! That's just it, though... Driller feels like a big technology demo. Much of the excitement came from wandering around and looking at things from every possible angle - approaching a tower and looking up to get that great feeling of height. This was all new stuff in 1988, but is standard fare today, as it was later in the STs life, too. When you take away the novelty, there isn't a whole lot of game left underneath.

This isn't a problem with the Freescape system itself, simply with Driller as a game. In fact, Freescape was later used to produce some far better titles, as well as the excellent 3D Construction Kit which allowed budding game designers to produce their own Freescape titles.

An attractive enough 2D control panel surrounds the view window. The view window itself contains a filled vector view of the world. They aren't the most impressive 3D graphics that the ST produced, but they serve their purpose. Mercifully, the game keeps a reasonable frame rate at all times, and this is likely due to the uncluttered map design.

There's not a lot to say about the sound in Driller. Acceptable samples are used for various events, such as falling, climbing, and colliding with a wall. Perhaps the most satisfying sound effect is that of the player's lasers discharging.

Driller really is a concept game. While there are numerous puzzles, there's very little consistency in the way that things behave, between them. It's also difficult, by sight, to figure out which cube is something you need to activate by shooting, and which is merely part of the scenary or a step to climb on. The play style therefore tends very much towards trial and error, with frequent saving as you progress.

Sometimes, that abyss is real. The 18 platforms are supposed to cover the entire surface of the moon. Therefore, while some are connected, there's a gap between others. Roll or fly off the wrong edge and you plummet to your death, with no way back. There's absolutely no audio or visual clue that you're heading off the wrong side of a platform until you do so, which only serves to add to the constant trial, error, loading and saving that's necessary when playing Driller. In defense of the developers, the game does come with a handy 3D map that you can assemble, and by looking at this it is possible to deduce where the real exits are, however this sort of death still feels a little cheap, and it's frustrating to lose a lot of progress this way.

I also found a few times when flying the jet that a bug would reveal itself when attempting to leave a sector at too great of an altitude. All the scenary would disappear and it would just be me in what at least seemed like a completely empty region.

While the frame rate is acceptable, the game was designed to be played on much slower machines than the ST, and therefore the gameplay itself is quite slow. In fact, nothing tends to move in real time, with the exception of the firing of laser beacons. Typically, nothing happens in the game until you make a move which causes it to happen.

The game is not without its charm, but it could have been so much more than it actually is.

A step forwad for 3D gaming at the time, Driller is a piece of history, and should be remembered for this. Having said this, if you're looking for a great 3D adventure, though, there are far better out there, even within the Freescape series.

Disclaimer: Michael Jackson was not interviewed for this review, has nothing to do with this review, has probably never heard of the game Driller and absolutely did not write a song by this name. Bubbles, however, may indeed be rabid.