March 30, 2005
Brilliant scientists, eh? A tempremental lot. They're forever fortelling doom, finding ways to save the world and then scarpering off into hiding before the big day comes, leaving their mankind-saving invention in pieces, scattered around the world.

It happened in Damocles, it happened in countless bad Sci-Fi B-movies, and in a matter of complete coincidence, it's happened in the subject of today's review, Terramex.

Yes, the much ignored genius, Professor Albert Eyestrain (*groan*) predicted many years back that a meteor would strike the earth. Then he went all reclusive and left unfinished the device he was building to save us all. The needed parts are all nearby, though. So all someone has to do is find the professor, convince him to help, and assist him in completing his work by gathering the needed components. All in a day's work though, right?

Terramex is a flip-screen arcade adventure, platform style. Pick one of five heros, each from a different nation, and then wander the land, picking up objects and figuring out where to use them in order to progress. Conventional logic doesn't always dictate the correct solution to a problem, but thankfully a useful "think" key (T) has been provided which will make the player's character come up with the right object to use in nearly any situation.

What's left to do is actually find the objects and stroll the side-on, flip screen landscape, exploring, while avoiding the numerous enemies and hazards that litter the land.

The game is from the same creative team that brought us the Monty Mole series, and later, Chubby Gristle and while this game fits into the same genre, the style is a little different from earlier offerings. Full colour backdrops and coherent environments are the order of the day, with slightly larger sprites than we've seen previously.

Something about Terramex screams "Budget game". The presentation is typically adequate and no more, and the gameplay, while entertaining enough, isn't particularly epic. The selection of five characters more or less serves as a gimmick, the choice affecting nothing other than the player sprite and the solution to a single room in the game.

The opening presentation consists of a completely static character selection screen, quite obviously put together in some paint package, and a few text only instructional screens if you choose to click on the "help" option. Not particularly flash, but like much of the game, serves its purpose. The player sprites are colourful and well animated, with some nice touches such as the nodding and shaking of heads in certain situations. The enemy sprites tend to be less well animated, althrough still large and colourful. The backdrops vary in complexity, and make good use of colour, but again seem functional rather than outstanding in any way. The whole game has a sense of humour about it, which shows through in both the graphics and the gameplay.

A catchy Ben Daglish track plays continuously throughout the game, and as usual, his work doesn't disappoint. Actually, the very simplistic sound effects detract from the atmosphere generated by the music, as they typically interrupt one of the sound channels whenever they occur.

I'll start by saying this - in the interests of being comical, the puzzles don't always make a lot of sense. A good example is the vacuum cleaner. Which you can ride and fly around on... but only in certain rooms. The instructions make an attempt at explaining this particular instance - strange magnetic forces under the ground in the region, or some such malarky. Thankfully, many of the puzzles are more sensical than this, and if you get stuck, you can always use the "think" key. It's a pity that no ST site has thought to scan the original list of objects that came with this title. There's no textual description of items in the game, but the original came with a handy reference sheet.

Controls are generally responsive, and the gameplay is smooth enough. It definitely has the air of a short lived budget game though, once you're through it, there's little replay value as the drive to play is to see what comes next, and to figure everything out. Luckily, there's plenty of fun to be had on that first play through.

"Ahhh!", I hear you say. "Doesn't the inclusion of five unique characters enhance the replay value of the game?". Not really. You see, each of the characters acts in exactly the same way. They all look different, but there are no special abilities to speak of. There is in fact one room in the game that changes, depending upon the character you've picked, and each of them must find a different object to pass this room. Other than that, however, the game is identical from start to finish.

Sadly, Terramex suffers from a problem that seems to be a mainstay of Teque arcade adventures. Who remembers the Monty Mole games? And what was the MOST annoying aspect of those games? The crushers that came down at totally random times, meaning that even the best player was talking a gamble, every time they had to cross one. This time around, we've got snakes that pop out of rocks, with similar random timing issues. The best method is always to run right after the snake has come and gone, but there's no guarantee it won't just pop right up again. Hopelessly unfair.

A fun little adventure, definitely a few steps up from Chubby Gristle, marred by a few little quirks and some very "make do" presentation. Worth a try.

Fun fact: Did you know that in North America, this game was released by Datasoft under the name of "Cosmic Relief - Prof. Renegade to the Rescue!". It's true - I have an original copy right here. So, in the interests of being more descriptive, we have one of the stupidest game titles in history. Little surprise though, really, we're talking about people who found "Margarine" too crypic so renamed it to "I Can't Believe It's Not Butter". Oi.

Disclaimer: No offense. The reviewer lives in America now, and is happily dating an American. Still, regarding the titling thing. Give me a break. Yeesh. 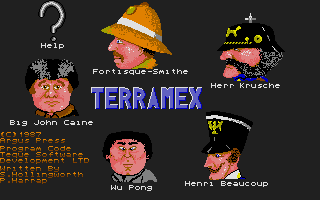 The title screen. It's static. Just move the cursor over a character and press fire to play. 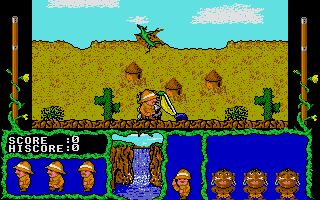 Near the start of the game. Grab a Dirt Devil and get flying! 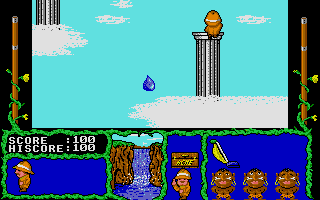 Climbing a pillar to collect an object in the clouds.