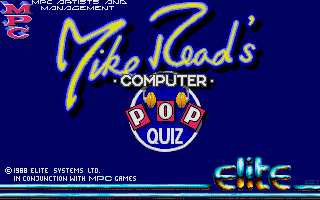 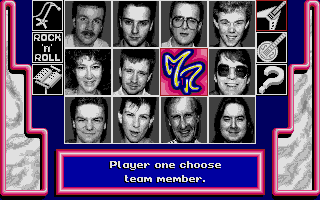 I didn't realise that all these musicians were professional sportsmen too... 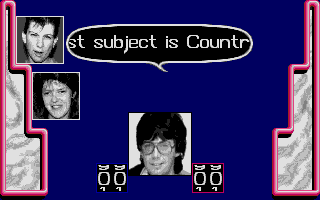 Mike says the same things over and over ...

Back in autumn 1988 when me and my brother got our ST, we were sifting though some of the disks that came with the machine and decided which to recycle and which to keep. Then my brother went out to his mate's house and came back a couple of hours later with a box of compilation disks to try out. We spent our evening browsing through them and he copied the ones we liked. One of these disks contained Pop Quiz, and it was the first time I'd seen it, and I played it for all of 10 minutes. I judged the game to be OK but I didn't know much about music at that age so it went over my head. My brother didn't like it and we decided not to copy it in the end. The next time I would see/play the game was about 15 years later - last saturday infact. My memory of it is frighteningly accurate though! I seem to remember another game... 'A question of Sport' I think, and it was exactly the same game, just with sports questions. It was amusing because it was the very next disk we tried. Check it out - even the faces are the same... I didn't realise that all these musicians were professional sportsmen too.

Anyway, despite what the databases say, the name is spelt Read, not Reid. Bare this error in mind if you do any searches, but I think that the two I've listed are the only ones.

Graphicswise the game is simple, with the background being drawn in flat blue, and greys are used for other things and some parts are edged with neons. All text is custom graphics and has been anti-aliased to improve it's appearance, which is nice to see. The overall appearance is of something simple and minimalist, but where graphics is used, it is good quality.

Before the game begins you must pick your team from the 12 faces. It reminded me of those school PE lessons where I was always picked last, and only then by default, because I didn't like sports and I had a habit of disappearing when I got bored. Palette switching has been used on alternate refreshes to extend the range of greys available and create the illusion of more than 16 colours on screen at once, but it does flicker slightly. This is better than nothing and deserves recognition. The 12 team members have a specialist subject, and one of the rounds does ask questions from these subjects. But it's a shame that the specialist subjects are not put to greater use, perhaps to confer/offer suggestions from time to time.

Soundwise, Pop Quiz is limited to a moderate quality theme tune, between-round jingles, and crowd cheer when you get a question correct. It gets tiring quite quickly, but the theme tune is enjoyable enough.

The questions are ok - a good balance between easy & difficult, but I have a sneaking suspicion that the computer's team has been rigged, because it is impossible to be a clear winner. If you get too far ahead, the computer gets smarter, and if you lag behind, the computer stops scoring points too. This is very kind for the programmers to include but it renders most of the game useless because the scores are guaranteed to be proximate before the last round starts. It prevents Pop Quiz getting a decent Lasting Appeal mark.

Questions are organised into 5 separate blocks so you can play block one until you begin to recognise the questions, and then move onto block two. There's enough questions here to keep you entertained for around 50 plays. During my reviewing I only looked at blocks one and two, and I was scoring around the 20-25 point mark once I'd got used to the game.

Finally, the flow of Pop Quiz is a bit too rigid for comfort eg, Mike says the same things over and over, making it feel too much like a computer algorithm and not enough like a quiz. The games appear rushed, and some of the rounds are too short for comfort. The whole game takes just 12 minutes. Mike's verbosity does lengthen the games, but it would have been better to ask more questions, or give more time for answering them.

If you play this game just once today and never again, this is about as good as retro gets. If you liked your 80s music and a bit of 70s too, like Sarek does, then you could really enjoy a session on Pop Quiz. So sign in and test your knowledge of retro music today.