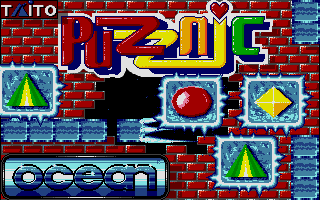 Ocean had again a nice idea ... The end result however was lacking. 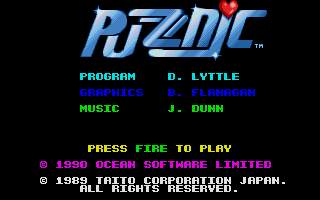 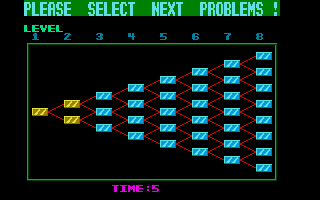 Puzznic is an arcade-puzzle converted from the famous Taito coin-op game. 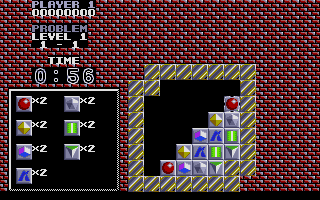 In the game the blocks themselves are nicely decorated and it is easy to distinguish the patterns for matching purposes.

Around this time of the year in 1994, one of my friends generously surprised me one morning by handing me her boxed copy of Puzznic and saying "This is for you. We're getting a mac for xmas and I've decided to give you some of my games. I'll bring the rest around in a parcel on xmas day in the evening."

There was something unsettling in her voice. Now I knew that Puzznic was her favourite game, so I wondered what was going on with this gift. I slipped the disk into the drive and power on. As the game was loading she explained her action more fully, "Well my Atari is actually my dad's, and he's selling it and putting the money towards buying the mac. But I like these games, and they are mine, so I thought I'd give them to you and if I want to play them I come around here."

My heart sank, and the story upset me almost as much as she was by telling it. She was angry with her father and who can blame her. But then the music started and I remembered that I had just inherited or was about to inherit half a dozen games....

Puzznic is an arcade-puzzle converted from the famous Taito coin-op game. Beginning with pre-arranged screens of bricks, Puzznic involves grabbing and pushing bricks left or right with the intention of bringing matching pairs or triples together. Matching bricks will disappear upon contact and the aim of the game is to remove all of the bricks from the grid within the time limit.

Because a game like this could easily become repetitive or the player become stumped by a particular level, Ocean have made hundreds of different levels such that there is 1 level 1, 2 level 2s... upto 8 level 8s. The player then has the choice of which level to play by choosing a route across an array of these level sets. No one level must be played, and there are enough variations to keep you entertained for at least a three hour sitting!

Because you are free to play all of the sets at a given level if you choose to, there are basically three ways of playing this game:

- Get as far into the levels as possible so you can boast "Yeah, I've done level 8.".
- Hike your score up as far as possible by focusing on the easier level sets.
- Aim to explore all of the level sets, for curiosity's sake.

I tend to go for exploration myself.

The difficulties in the game arrise from various factors eg,

(1) The bricks are often given to you stacked up in towers or sitting on little shelves somewhere. If the wrong brick is moved, or a brick is slid the wrong way, it might make it impossible to bring all matching bricks together if a 'gooseberry' is sat inbetween a pair.

(2) If there are an odd number of bricks, some will have to be removed as a triple. This often requires careful thought to first manoeuvre two matching bricks without allowing them to touch so that the third 'keystone' can be dropped/slid into place to complete the triple.

(3) Often a level can involve dragging or dropping bricks onto moving platforms which requires precise judgement.

(4) Sometimes it may be necessary to build a brick platform for ferrying bricks across some place else. Here it is important to build up without bringing matching bricks together or else the platform will vanish, but you must bear in mind that a platform will eventually need to be disassembled.

The game is controlled by the joystick which I personally dislike. The grabber moves awkwardly because joystick microswitches are either on or off. There is no speed control, so what should be precision movements can go frustratingly clumsy and what should be rapid reactions can seem to go at a snail's pace. It might have been better with the mouse. Because of this complaint, my nerves have only tolerated progress up to around level 5 (of 8 ), and I've never seen the levels any further than that.

Graphics are of good quality, and there is the usual use of custom fonts and strong colours that we expect from Ocean. Also, the grabber motion is smooth; falling blocks are rendered smoothly; the blocks themselves are nicely decorated and it is easy to distinguish the patterns for matching purposes; and the colours are generally harmonious.

The theme which is a good quality chip tune and instantly recognisable, but is quickly tiring. Within the game, there is silence except for the brick movement and disappear sound effects which sound strangely rough. Also there is the sound of creaking plastic as I apply illogical forces to my joystick.

Unfortunately the quantity of levels isn't enough compensation for these complaints because the levels all feel much the same and in my memory they all seem to blur into one. My most lingering feelings about this blur is being frustrated with the controller and thinking that I don't want to play the game anymore, which is a shame because the basic idea is great.

But also on the negative, the time limits are sometimes too tight, levels are a sometimes too difficult, and sounds could be better.

So my conclusion be in Yoda tongue it will... A nice idea Ocean it was. But like most of the stuff you've come out with on the ST, the end result disappointed with I am.