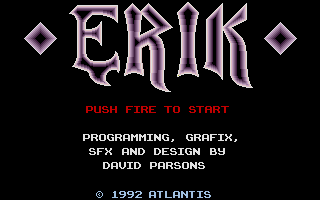 The title screen of this little platformer 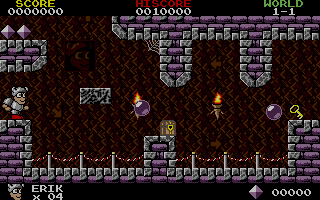 Some of the sprites look small and pixelated, and Erik's face is flat colour... 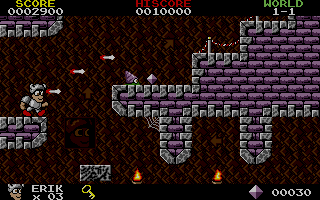 You can trade your dagger in for a three way dagger, or for more money there are fire based weapons... 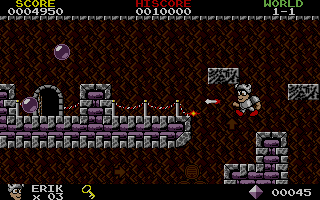 Erik's jumping motion is a springy happy one which tips the balance slightly more towards humour than serious. 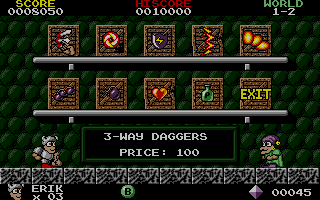 Some levels have a shop which is tended by a nice old lady... 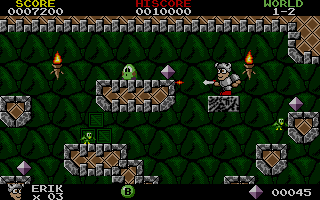 For tis the truth that land hath cursed be. Legend tells the guardians four who cometh in the blackened name of blood and sin. These Wretched woes bring misery unto all. Tis sin, yon Erik... sin. Take thy rod and thy staff and make haste, for the moon is already rising. But beware, if you are to fail, yon Erik, we will be defeated, and these days of olde will fade. Good luck my humble friend."

Erik is the knight in shining armour, a local hero, who armed with dagger weapon will save his land from the four evil guardians who have moved in. He is coated in traditional metal armour with a spiked helm. This is a vertically oriented platform game, which scrolls smoothy as you progress up or down.

The game is split into four blocks of levels, where each block contains around 6 levels followed by a boss level. In each you have to work your way up or down the platforms and zap anything which gets in your way or that can harm you. These turn into crystals of various shapes and sizes - some octahedral (which are cash crystals), and some monoclinics orthorhombics and biprismics are in there too for points value only - it's a geologists haven. If Erik gets stung, he disappears and only his armour is left to go clunking down to ground.

There are also treasure chests to collect and urns to break open which can contain any one of a number of things: special upgrades, points crystals, cash crystals, or may contain nasties, or set off traps.

The objective in each level is to find the key, which grants you access to the exit door, and this takes you forward to the next level. Also, some levels have a shop which is tended by a nice old lady. You can use these shops to spend your cash on weapons upgrades. For example, for 125 credits you can trade your dagger in for a three way dagger, or for more money there are fire based weapons and various explosives including bouncing bombs, or an extra life if you're rich enough. As is usually the case in these games though, if you are so good a player that you can survive adequately with basic weapons until you are able to afford an extra life, then you probably don't need one!

The four blocks are each built around a separate theme and come with their own graphics set. They are: medieval, ocean, futuristic, and finally garden - so it's almost the crystal maze, but without the harmonica tooting Richard O'Brien.

Graphics is very good, but not perfect. My only real criticisms are that some of the sprites look small and pixelated, and Erik's face is flat colour. Secondly, the palette doesn't appear as though it has been best chosen when we compare the game with the likes of Rodland or Magic Pockets. Although I should acknowledge that the platforms here do contain fine detail and still look relatively tidy, so this is possibly what the palette has been optimsed for. I'm just nit picking there though, to justify awarding it 9/10.

Soundwise, the game uses samples rather than chip sounds which is always a risk because the necessarily low bitrates raise issues with clarity. The overall effect I would say is reasonable. When sounds happen they are a bit too familiar and sound repetitive, especially with the bubbling sounds in the ocean block. Inbetween these noises the game is silent, so it can sometimes feel like a case of all or nothing. There is no theme tune or in-game music which is a shame, because it wouldn't use much cpu time and can be used simultaneously with the sampled sound effects.

The enjoyment factor is reasonably good, but feels unnecessarily subdued to me. Erik reminds me a little of the Spectrum adventure game King's Keep. If it were not for all the sprites bounding around, Erik would feel a little like an adventure game. Appropriate background music would have improved the arcade feeling no end, and added much needed atmosphere to the four different worlds. It would also have broken up the all or nothing feel.

Besides music, the game is lacking something else, and I think it is to do with the jumping motion. Platformers revolve around the player jumping up or down, so it is one of the most important things to consider during development. If the developers want the player to sit facing this game for weeks on end, they need to make the jumping motion as enjoyable as possible to perform over and over. Erik's jumping motion is a springy happy one which tips the balance slightly more towards humour than serious. I'm not sure that this is a good thing, because if the player is struggling with one level then humour is not always welcome. Also it takes almost 2 seconds before he lands again and independent from how long you hold down the fire button, he goes just as high. For this game, it would have been better to have the jump height dependent upon when the button was released, so that the player feels more in control and can prevent himself crashing into spikes hanging above his head. It would also be beneficial when jumping across a gap where there is low head height.