By being technology oriented I'd much rather savour the fragrance of warm ionised gas coming out of my monitor than the earthy undertones of damp soil. I'd much rather hear whir of CPU fan than the sound of ref's whistle, and rather than strain myself running around a track, I'd prefer to sit right here - slumped down in my swivel chair with my feet proped up against the wall. So as you can probably tell I have little interest in outdoor activities or sports. I generally don't like sports computer games either, so why should Run The Gauntlet be this month's game?

Ocean have a habit of producing high hype games that appear initially impressive. But once I play them I am often unimpressed. Let us see if RTG follows that trend...

RTG is mostly a collection of racing games, and racing games can be good fun. I can remember seeing RTG at an arcade back in 1990. I never played it there, but it did indeed catch my eye from a distance - it was Cleethorphes promenade one cloudy August morning - not a million miles from where the steem authors are now. Some of the machines are still there you know... If anyone fancies a weekend away

In fact it wasn't until our good friend Russ did what he does best that I got to play RTG. I'm guessing that there was a TV programme with a similar theme, because the game does look typical of a macho US game show, and Ocean do have a habit of computerising TV programmes and films.

When you first load the game, you get to sit and watch an animated photo of a guy jogging who looks like he's just escaped from Laser Maze with a couple of Duracells in his back. There's a cool theme tune playing too which is in the same genre as the theme tune to Commando, with steel drums, and toms. Sort of jungly.

Up to three human players can compete in turn based races against the computer, and each representing one of four countries: USA, Great Britain, Australia, and Holland, which seemed to me a bit of an odd selection. Maybe this was how they did it on the Tv programme?

As I began clicking, I got backdrop photos of rugged looking men on vehicles that were decidedly A-Teamish, and I was literally poised on the edge of my seat ready for a monster assault course and the ride of my life. Hovercrafts, Mini-Tanks, Power boats, Quad bikes and Supercats are all featured. They have great names for the courses too, like Aqua-Land, Power Extreme, Crater Race - it sounds great fun doesn't it?

The racing programme you will get is randomly selected when you start the game. There is only one land circuit - an anticlockwise ring with a couple of loops, a hairpin, and plenty of mounds. There are also three water courses. with rocks jutting out and marker buoys dotted here and there.

However, it was a little reminiscent of Stevenson's aptly named Rocket, which shot forward like... a snail. The great irony is that for what should be a rough tough game, play seems especially gentle. A couple of the buggies look like they are made of paperclips. Racing them feels rather like pushing paperclips around the carpet. Racing some of the boats feels like pushing Sid the Sailer around in the bath. As I rode around in my little boat I was half expecting to pass by the Three Bears having a picnic at the watersedge... I had to settle for a family of ducks!

It is clear that the graphics has received considerable effort from the developers, as there is an incredible amount of detail - Some parts of the background are animated, like ripples on the water, waterfalls, things bobbing up and down, and reflections of the flags. The graphics are very colourful and create a slightly cartoon-like appearance to the game which doesn't suit it particularly well. I feel that something is missing - and I think it is vehicles' sprites that rotate too jerkily, and they don't kick up enough muck when you hit the throttle.

The course graphics appears to be built up from small bitmap tiles in a similar way to SEUCK. The courses are approximately 4x bigger than the screen and are scrolled as you move towards the edges. Scrolling is quite smooth and most interestingly is done inertially, so that the scrolling speed varies depending on how close you are to the edge of the screen. It works well and is very easy on the eye. It was quite innovative for the developers to come up with this idea.

But it would have been nice to have courses bigger than this, with more variety of twists'n'turns, straights and off course sections. It wouldn't have been difficult to program if the graphics are built up this way. Bearing in mind though that the year was 1989, in the graphics department at least this was probably ahead of much of the competition.

What lets RTG down badly though is a complaint that I find in many games - racers in particular. AI players often seem to be the subjects of nepotism whenever there are collisions - your car always gets wrecked or spun off course or slowed down, while the AI vehicle trundles on undisturbed. If this unfairness happens too often, it makes the game annoying. One of the best (worst?) example of this is in Turbo Cup. Turbo Cup could have been one of the best racers but for this fault. I must say though that RTG isn't far behind, and it suffers in the Difficulty, Lasting Appeal and Playability categories because of this. It is real shame that we can't knock our opponents into a spin like they do to us so regularly. Additionally the mini-map is greatly distorted and is deceptive as much as it is helpful in showing the way to go.

The overall flow of RTG does feel rushed. There are times/scores shown between the programmes which are a bit too hard to follow because there are 'Round' scores as well as the 'Run The Gauntlet' scores. A simpler points system would have been better, and maybe tabulated to show the scores from each race and a sum at the end of the row, and updated after each race. During races, the AI players are not colour coded either which makes it difficult to know who is leading and who you should be overtaking in order to qualify for the next round.

Have Ocean delivered this time? We are being sold one frown-worthy racing game with a handful of different sprites to represent different vehicles, and we play against either a brown or blue background, and it kind of feels this way to me sometimes when I play it. Let us not forget though that this is an arcade game, and it works that way very well: It pulls us in, takes our money, entertains us for 10 minutes, and then we do something else. It is not as bland as some of Ocean's stuff, and for me it is borderline - they've just about delivered.

So why should you play it? Because it is amusing, and because the subtle meekness is attractive, I keep coming back to this game every couple of weeks and for some reason I like it. So this month, I recommend you all play Run The Gauntlet at least once. 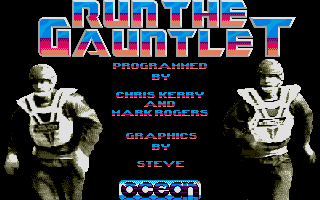 The intro screen with the jogging guys ... 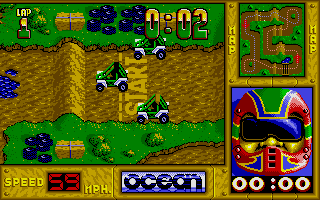 The buggies look like they are made of paperclips. 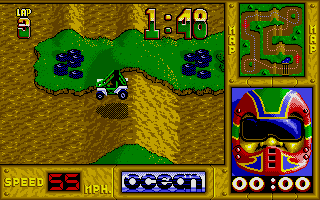 We play against either a brown or blue background in this game ... In this case again brown. 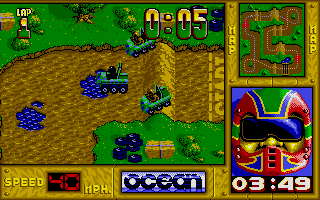 Even the minitanks look sweet in this game! 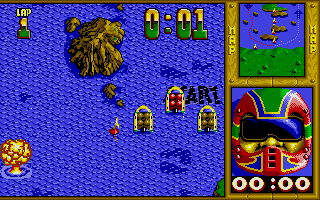 There is an incredible amount of detail - Some parts of the background are animated, like ripples on the water...