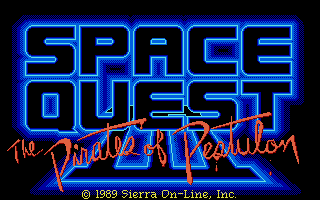 Made by two guys who should have known better! 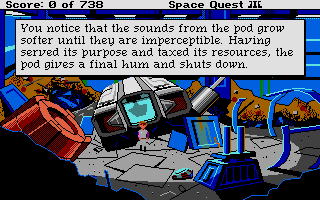 You awaken from your status chamber inside an automated trash collection space craft- task one is two find a way out. 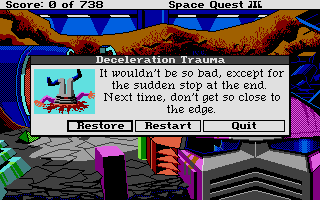 Make your character do something stupid and you die- simple as that- who said life was fair!

The adventure game market of the late eighties was saturated with, dull second rate entertainment. This was quickly exploited by companies like Lucasfilm (later changed its name to LucasArts), whose introduction of a mouse driven 'point and click' system- soon saw the demise of old fashioned adventuring altogether.

However before the dawn of luxuries such as the mouse, gamers were subjected to the hit and miss text structure, where players had to type their actions from the keyboard. Although specific actions were required to complete a series of tasks within the game- players without the ability to read the creators mind were subjected to hours of guessing the right syntax. While this became truly cumbersome to all without a Thesaurus and a photographic memory, some players enjoyed the challenge.

Sierra was a company with a long back catalogue of influential games and was generally learning from past efforts by trying to combine the traditional, with modern control elements. One of their first games to do this was Space Quest 3: The Pirates of Pestulon.

Sierra's 'Quest' games spanned fantasy, modern crime and science-fiction and spawned such creations as 'Leisure Suit Larry'. While some games were particularly rigid, the Space Quest series was light hearted enough to appeal to young and older audiences. Containing pastiches of popular culture and a suitably immature script, gamers were treated to adventures across many different planets, which included time travel and erroneous alien shopkeepers.

What really stood out about Space quest:3 was the sense of humour, your hero- hapless 'Roger Wilco' a space janitor, endeavours to become a captain of his own ship- a typical underdog scenario for a player. The fact Wilco was naïve and a bit of a coward only enhanced the comic effect and with gaudy characters like invisible robotic bounty hunter 'Arnoid' the game achieved a classic status.

Unlike the games that had gone before it, Sierra had included a mouse movement system and a new improved Parser interface (allowing nearly all words to be understood by the game). The quality of the graphics for the time was unmatched and the game won a prestigious 'Best Adventure of the Year' award in 1989.

Space Quest and its sister games featured what could be called a sinister and slightly dubious inclusion in its game play. The fact that you could die at any moment put pressure on the player to be cautious of events (and to save the game every five minutes), this however only encouraged people to use their brains instead of brawn.

While being overtaken in popularity by Lucasfilm's offerings such as the Monkey Island series, Sam and Max and Day of the Tentacle, Sierra's games still have a devoted following and while Space Quest 3 may not be the best adventure game out there- it does retain a certain aura of nostalgic amusement for it's audience. The fact that you build yourself a space ship in this episode- gets my vote!