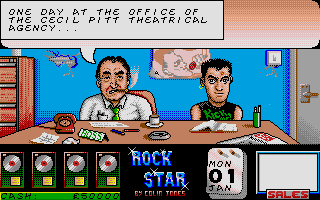 The managers are depicted as a pair of inadequate, money grabbing half-wits� hmm maybe that�s why I like them! 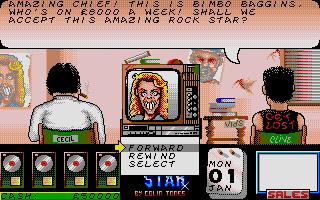 Decision time, which freakish pop star will you choose? 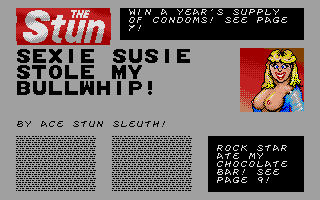 Unfortunately some publicity stunts go unnoticed by the media. 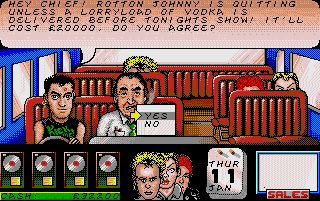 The demands of some rock stars can be a little� too realistic! 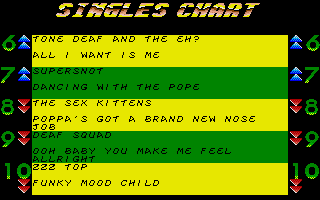 The weekly rundown of the music charts.

There are some games that fall neatly into a category and some that are completely original, Rock Star may not be remembered for being ground breaking, but there was something uniquely special about it. After inserting and running the disk, you find yourself propelled into the office of a showbiz agency where you are presented with the most unlikely pair of directors.

Imagine 'SIM Music Manager' where you as the player are given the task of taking on some of the biggest names in popular music and overseeing their rise to the top. With names slightly altered to protect the developer from a law suit, the game features Michael Jackson and Kylie Minogue parodies and a host of other eighties personalities.

The game takes place in a neglected office where two mismatched managers handle the affairs of the selected pop star. From recording a single, to creating publicity and eventually going on tour, all facets of the nefarious show business industry are in your control. The game gives you choices in how to handle different situations that confront the managers. With a certain amount of cash to play with- you soon have to make some difficult decisions, like whether to give into a pop stars demands to buy them a truck load of vodka. Depending upon the outcome you could either loose a star or get a very drunk singer live on stage- which could get you some great publicity- especially if they break a few guitars!

Graphics-wise the game is efficient in grasping your attention, with pop star caricatures reflecting a healthy sense of realism while still maintaining the warped sense of humour of its creators. The distorted theme runs throughout the game with music depicted as a chaotic shambles as the stars rake at their instruments in the recording studio.

While the game features many well implemented ideas the only place it is lacking is in the interaction. Mouse controlled option clicking is at best the only way to play the game, while functional- the game is presented as a series of choices. Perhaps that is what its creators wanted, but I couldn�t help feeling that the game was slightly shallow in some respects. The humorous escapades of a music agency boss are addictive all the same and I still have a place for Rock Star in my ST collection.