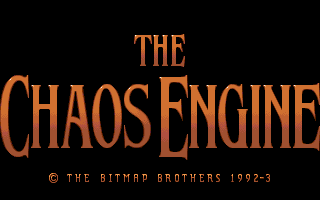 Just imagine the atari blasting out the title tune from 'Bomb the Bass'. 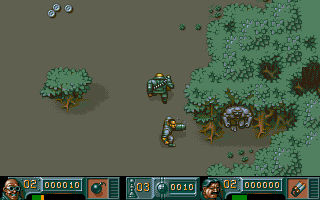 The action seems a little too quiet here, just wait until later! 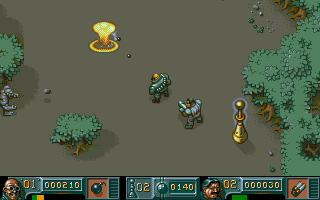 Using dynamite and other power-ups made life a little easier in akward situations.

Whenever the Bitmap Brothers made a game- it was compulsive to take a look. That's because you expected something special, nine times out of ten you would be blown away! The high standards of design and ingenuity were present in all their games and other developers could only dream of reproducing the Bitmap style. The Chaos Engine is a prime example.

We have all seen top-down shoot-em-ups before. But presented with the choice of having your character aided either by lets say- your best mate or directly controlled by the computer AI, the co-operative nature of the game was at the time unsurpassed. What also made this game unique was the scale of the playing area, while exploring a single level it could take you hours to eventually find all the secrets- a tribute to the deviousness of its creators.

Starting a new game you were presented by a lavish menu giving you a choice of tough mercenaries for hire, all were strangely memorable in appearance and played differently. Then it was time to enter the game worlds, each having a specific fresh gothic style teeming with godless monstrosities just waiting to be blasted into oblivion.

The game worked well as your pair of merc's hunted down and eventually destroyed nodes which opened the doorway to the next level. At the end of each section you could eagerly upgrade your characters stats, preparing for the battles ahead. I should point out that the competitive nature of the game sometimes put players at odds when stumbling over power-ups, it then became a race to see who picked up the weapon upgrade first (as seen in the Gauntlet series).

It should also be mentioned that the excellent atmospheric music was supplied by Bomb the Bass, who contributed to the Bitmaps' other classic game Xenon 2: Megablast.

With the advent of true three dimensional gaming, with such titles as Tomb Raider and Grand Theft Auto- it is sometimes easy to forget where it all began, in the ingenuity of game studios like the Bitmap Brothers who influenced a generation to strive for new creative standards. Overall The Chaos Engine is a cornerstone in style and gameplay and is well worth dusting off a copy.