Three dimensional gaming on an Atari machine was an altogether mediocre experience. Games like Castle Master pushed the genre to its boundaries, while other titles barely justified the use of the contemporary graphic structure. However some individuals saw the potential in a truly 3D environment, one such pioneer was Paul Woakes- creator of Mercenary.

The series introduced a fully 3D world or in later titles a star system to home gamers- a pure science fiction setting to explore. What made the series so astonishing was the ability to jump into the cockpit of a space ship and fly around the planet in a matter of seconds. While other titles at the time claimed total freedom, the Mercenary series truly delivered.

Imagine waking in a cell which to your delight is momentarily unlocked, outside an alien planet- full of wonderful cities to explore. But how do you get to them? Walking or running would take hours- luckily this culture has introduced the useful idea of public transport. Taking a taxi to the spaceport lets you take in the sights while the driver happily gives you a quick insight into the local and system-wide news. Finally arriving at your destination, you sit in the space shuttle cockpit behind the pilot and watch nervously as you blast off into space, and then you think- I did all that in the five minutes?

Today the graphics look dated, yet the sense of charm and functionality of the environment and information display have not vanished, the genuine thought and initiative gone into making the series is apparent from the first time you step onto a new planet to the time when you leave it.

Sound effects cheerfully alert you to environmental situations and somehow the lack of incidental music adds much atmosphere to locations. Gameplay is straightforward and using a keyboard to move becomes instinctive, controlling a ship or car is easy at slower speeds, however loosing sight of your objective while travelling at a thousand miles per hour can be slightly alarming.

The scope of Mercenary 3 is somewhat bewildering at first and it is easy to forget that you are playing a game with a certain mission. Comparisons could be made to the Grand Theft Auto series and to be honest there are genuine parallels, while graphically both stunned audiences at their launch, Mercenary 3 genuinely feels as though you can go anywhere and do anything (and you can with the aid of a spaceship!).

Overall a great experience, should you stumble across the game in cyberspace be sure to download a copy and take a trip to an alien star system! 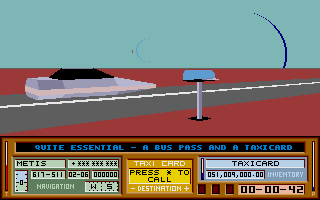 Want to catch a taxi? Just hope they slow down when they see you! 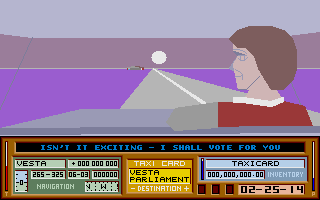 The taxi driver's of this world seem as talkative as our own! 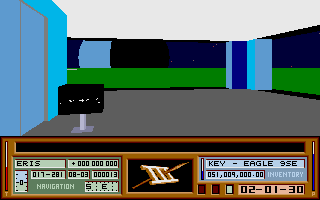 Locations are grand in scale and finding a single item in a star system of over ten planets can be a little frustrating! 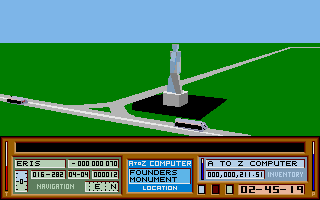 Space ports look and feel like genuine working environments, the fact that you can go anywhere in a matter of minutes does feel appealing.