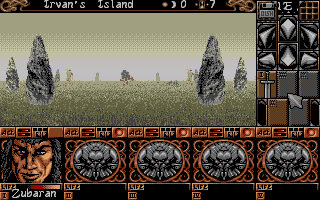 The beginning of the game. 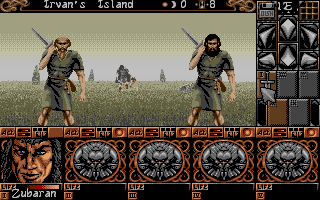 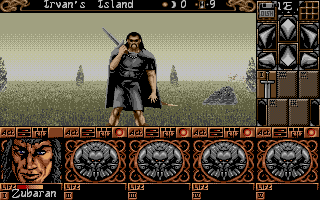 You should avoid him in the beginning, he is too strong. Come back to beat him later.

Dwilgelindildong!! Here is the second chapter of the Ishar trilogy, the best role playing game ever, in my opinion. You thought it was finished after having overcome Krogh in the preceding episode? Well not at all, because Shandar, the monk of chaos, has benefitted from the massive but clandestine arrival of the people from the grounds of the North which entered Zach's Island. Shandar became rich by trading potions of hallucinogens and he captured the whole city. Many worshipped him in a demonical way. You are Zubaran, the new lord of Ishar and are visited by a strange appearance...

Ishar 2 has a pallete of 32 colors. Graphics are neat and the management of the day and the night transitions is a strong point of the gameplay. The setting is varied. You will find yourself in a town as well as in the forest, in obscure labyrinths and even in the mountains.

Many sound effects are used to punctuate your progression. The screams during the battles are realistic, just as the blowing of the wind when you are in the mountains. The music of the introduction is pleasant without being innovative.

This is a role playing game which is played like Dungeon Master. You move in a universe of three dimensions. You have the possibility to create a team including up to five members. The subtlety of the gameplay consists of creating a team of individuals with extremely different personalities (Elves, Dwarves, Human...). You can manage each individual by clicking on his bust and assigning different objects to him or her. Management can prove to be tiresome for a beginner but once you learned the controls of the game, you'll be happy with it.

Ishar 2 is a well released game but suffers from few defects. One of them could be the slowness of the gameplay, but graphic quality has a downside, inevitably. This game is, in my opinion, the most fascinating of the trilogy and I advise you to play it. You will see.