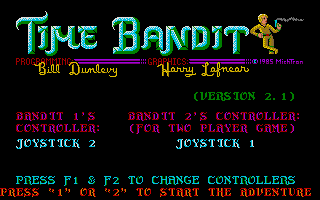 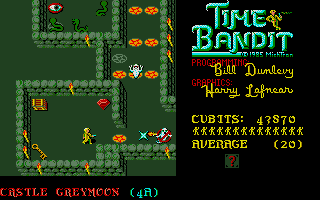 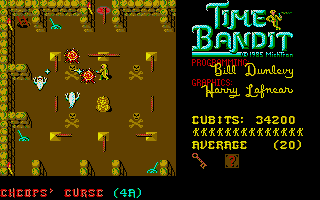 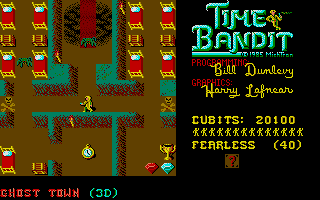 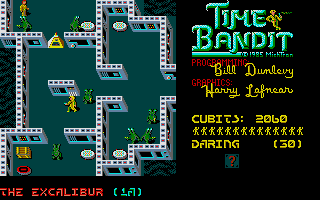 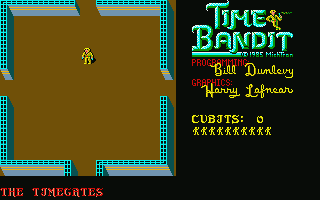 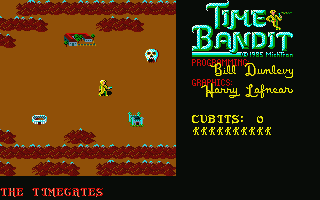 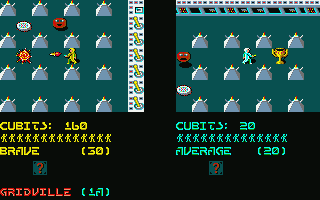 Time Bandit is one of the best ST arcade / action games of its time. Designed by Bill Dunlevy and Harry Lafnear, it was originally released for the TRS-80 Model 1 computer in 1983. That version was very primitive because of that system's limitations, so the authors decided to rewrite the game for the TRS-80 Color Computer (CoCo) which had 4 colors and better graphics. In 1984, a version for the Sanyo 550 computer was made, featuring 8 colors, higher resolution graphics, four direction scrolling, and a two player option. The following year, they started working on the ST version with enhanced, 16 color graphics, bigger maps, and more game depth, including a built-in language for text adventures.


After seven months of work, the final Atari ST version, published by MichTron, was released in 1986. Although it has the basic structure of an 8-bit shoot 'em up game, it took advantage of the colors and speed of the ST. Some years later, the game was ported to the Commodore Amiga and the PC by Tim Purves, with relative success. A sequel called "Time Bandit II: The Rings of Faigth" was also planned, but that project never saw the light. Many people believe that Time Bandit is a "Gauntlet" clone; they´re wrong. In fact, the first version of Time Bandit was released in 1983, while Atari introduced the original arcade version of Gauntlet in 1985.

The graphics are limited to the ST standard 16 colors palette. But the sprites and backgrounds have lots of detail, compared to other games of that time (check other titles from MichTron, like "Mudpies" or "Major Motion"

. The sound is poor, but better than the sound of any PC game of that time.

You are the Bandit, and your adventure starts at the Timegates area, where you find sixteen time-travel portals that give you access to an equal number of worlds. During your long journey, you have to fight the Evil Guardians (monsters) of each world, gather treasures, and recover the Artifacts. Once you enter a world, you must find your way out, with a number of keys and locks to open.


The Guardians come in different forms: snakes, lions, trolls, spiders, worms, eyes, aliens, ghosts, bombs and other nasties. You get points (cubits) for the monsters destroyed with your missiles, for the treasures you collect, and also for finding keys, locks and solving puzzles. The game begins with 14 lives and you get an additional one with each 1000 cubits. Controls are very smooth and scrolling is fast. According to some magazine reviews, the game is entirely programmed in machine language.


The sixteen worlds are grouped in six categories (time periods):


Each world features sixteen levels of increasing complexity (except The Excalibur world, with just four levels). In some lands, like Castle Greymoon and The Excalibur, it is necessary to complete some simple puzzles in true text adventure style (with a very limited parser).


There are seven Artifacts in the game. You will find six of them in the last levels of different worlds and the last one when you manage to complete the sixteen worlds.


A great feature of Time Bandit is the two player mode, which lets two people play the game at the same time. You can play in a cooperative way, but things get better when you fight with the other player! If one player dies, he is turned into a shadow.


There are four known ST versions of Time Bandit. The two demos, released with the same version number (.96), have their own history. The first one was a private demo for Michtron, but when the game took much longer to be finished than originally planned, MichTron decided to release it to the public. The authors didn't like that, because they considered that first demo crude, with too many things unfinished, so they polished and released it by themselves using the same number, hoping that people would get their version instead.

- There is a strange, "futuristic" structure on the Timegates.
- Only five worlds are featured: Major Hazard, Castle Greymoon, Secret Slime Pit (renamed to King´s Crown in the final version), Old Bomb Factory and Shadowland (it doesn´t have an icon).
- Some world icons are not working.
- The worlds look unfinished.
- A letter "T" appears instead of treasure icons.
- Some of the monsters and the monster generators look different.
- You can jump to another world or level using cursor keys (it sometimes crashes).

- The Timegates structure from the previous version was removed.
- More worlds included (for a total of seven): Castle Greymoon, Secret Slime Pit, Shadowland, Omega complex, Major Hazard, Rio Grande Hotel (renamed to Hotel California in the final version), Old bomb Factory.
- There are also more world icons, many not working. I wonder if they planned to include a Centipede clone.
- The wolds look almost finished.

- The first official Atari ST version published by MichTron, featuring the complete 16 worlds.
- Some reviews criticized the lack of a save game option.

- The version shown on this review.
- Almost identical to 2.0. Some minor fixes and a save game feature added.

Time Bandit remains as one of the best action games of that era. You should give it a try.