A while ago I got the chance to talk to one of the guys from Silmarils, my all time favorite software company. I am a very big fan of their Ishar games, so I was really stoked to be able to talk to the following developer. Not only that, he is also the composer of my all time favorite piece of music on the Atari ST. Are you curious yet? Want to learn a little bit more about this amazing French company and its fantastic developers? Join me ... 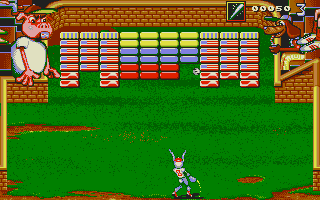 Silmarils was not convinced about this concept. It wasn't after the first preview that it got the greenlight. Bunny Bricks sure is the 'odd kid' in the Silmarils catalogue. 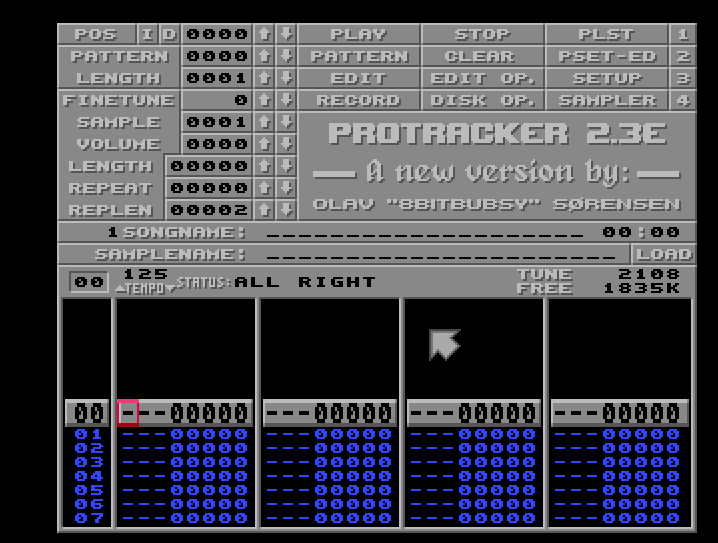 Protracker was used to create the finishing result of the amazing compositions by Fabrice. 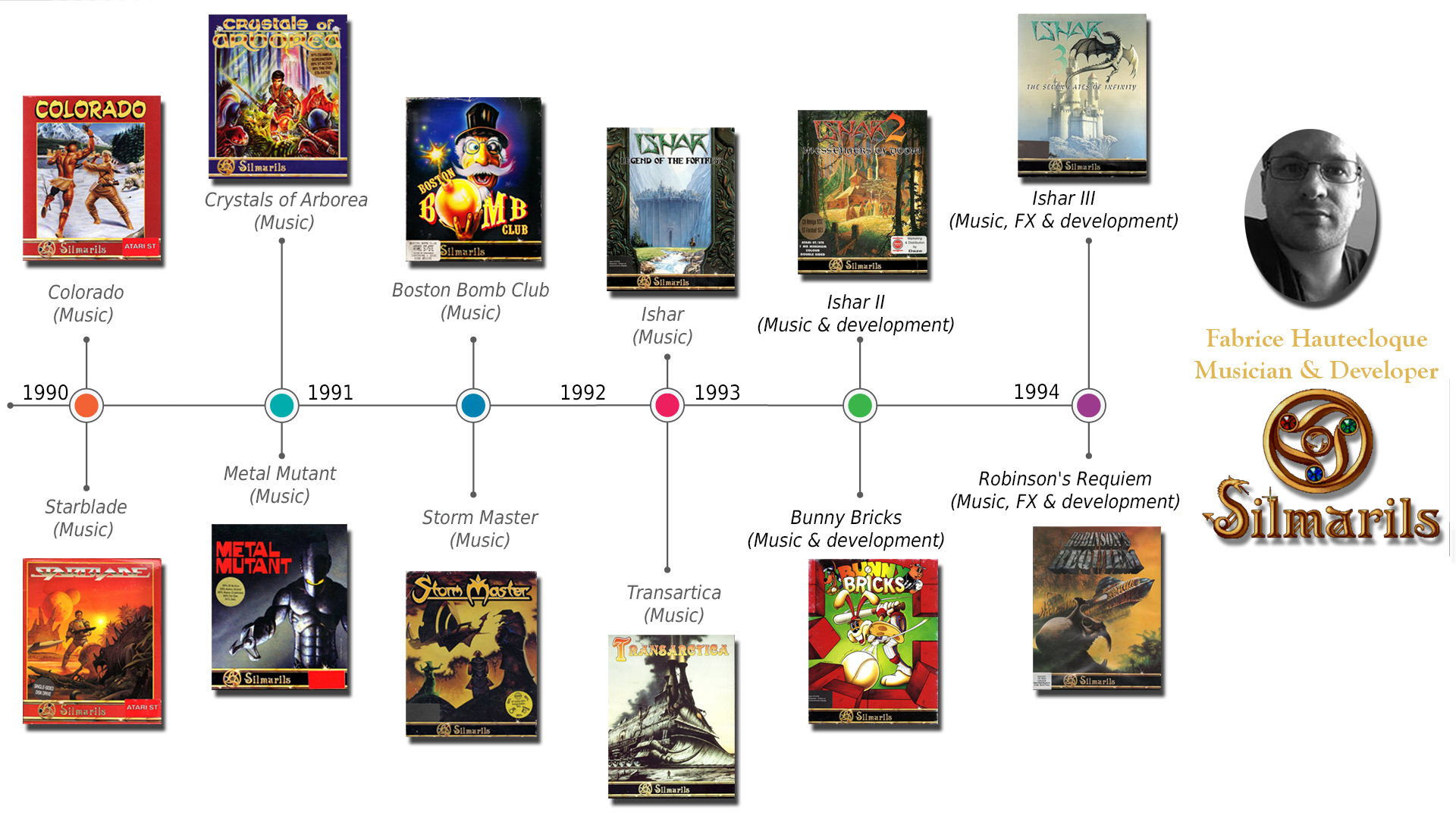 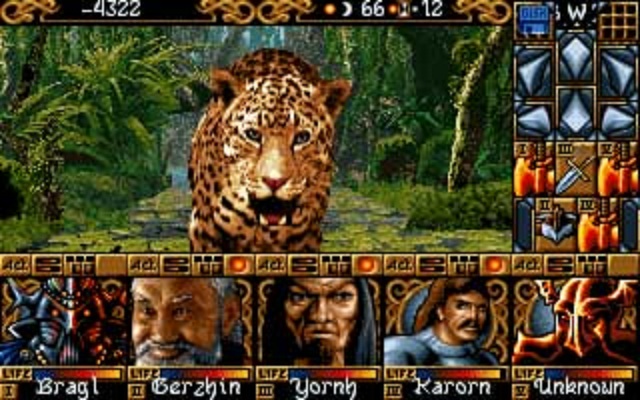 Ishar 3 on the PC featured beautiful 256 colors on screen, yet the core was build on an Atari ST 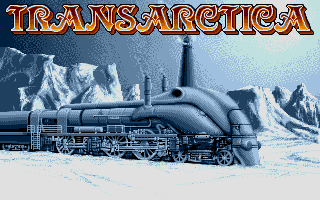 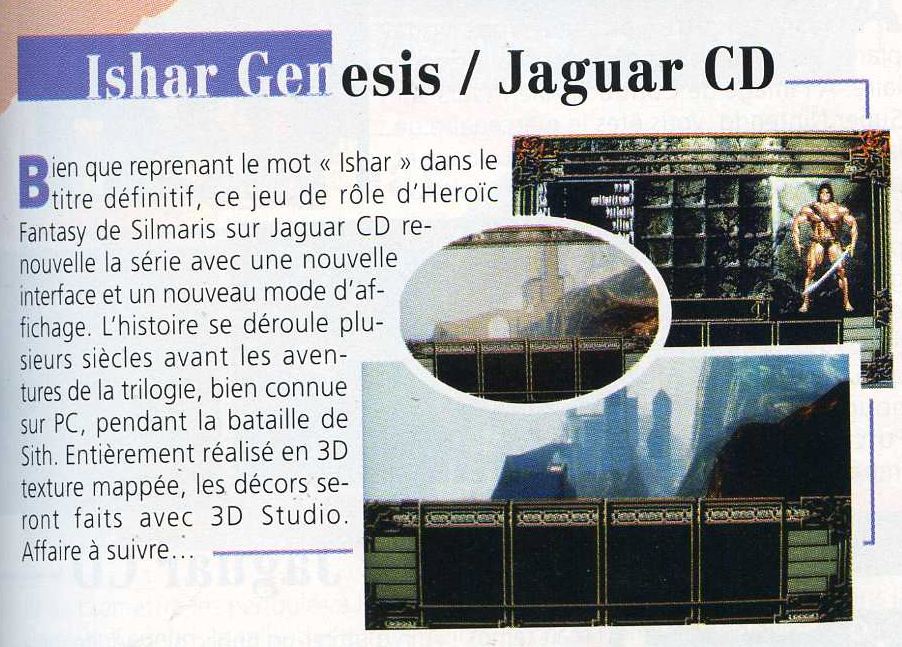 Ishar Genesis - The Ishar game that never was ... 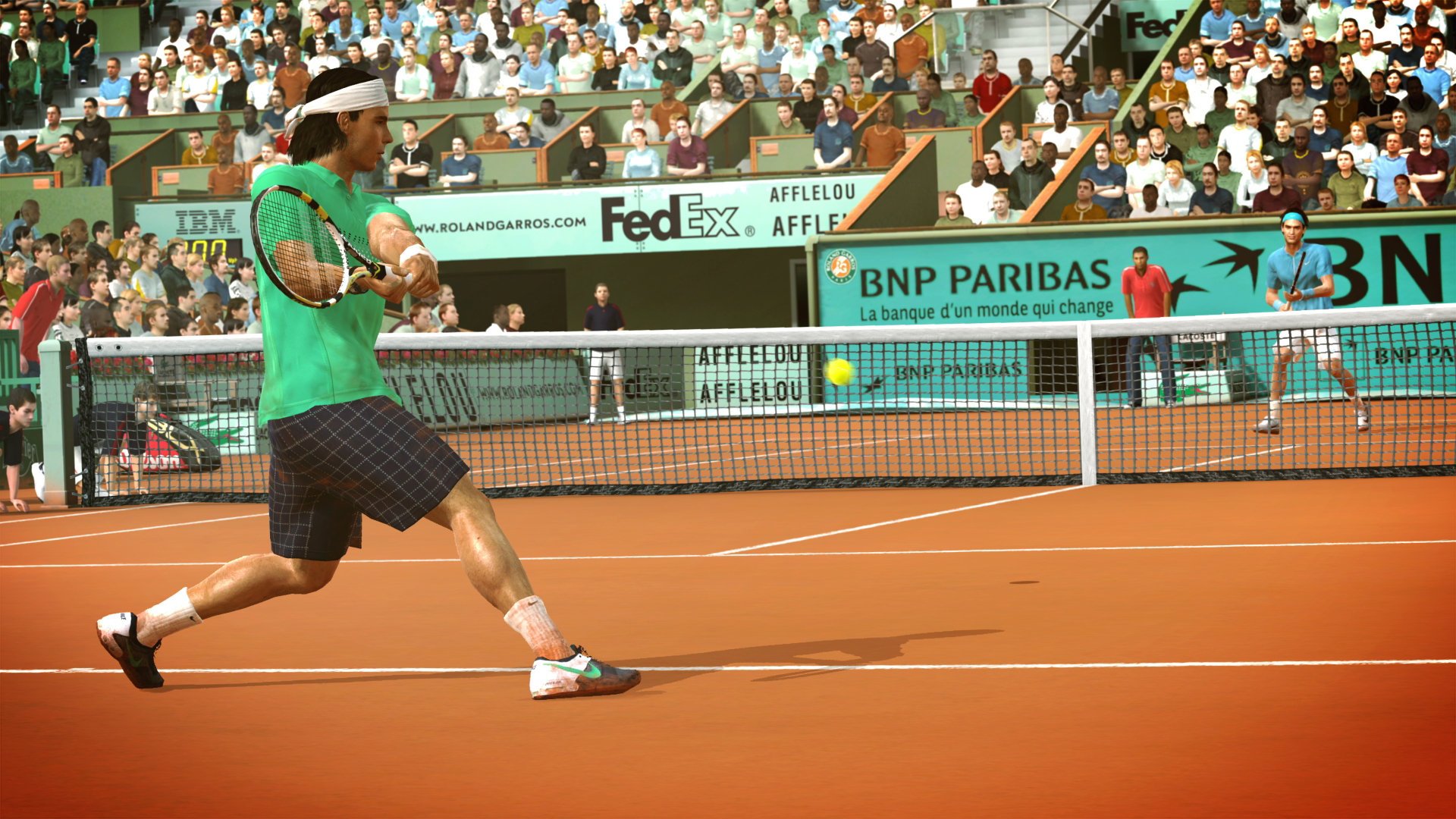 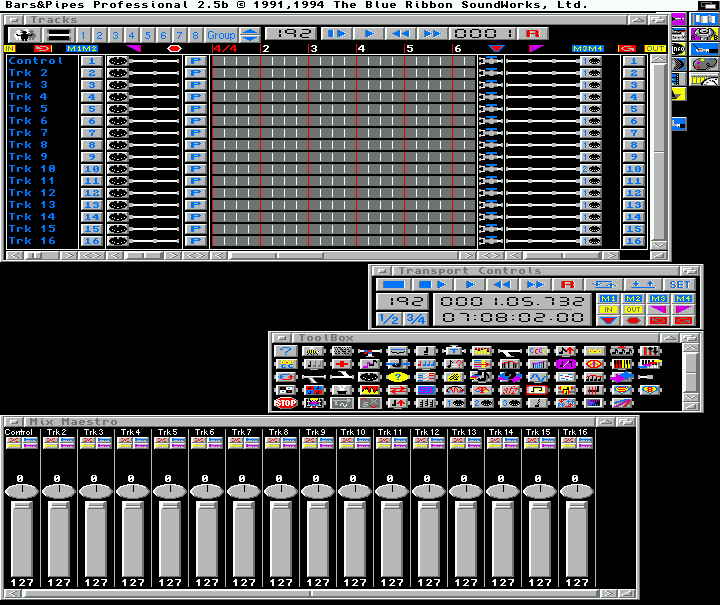 Bars & Pipes on the Amiga

This is where all the magic happened!

1) Hello Fabrice, thank you for joining us. Please introduce yourself to the people who haven’t heard from you before.
My name is Fabrice Hautecloque, and I was involved in the development of several games at Silmarils from 1989 to 1994. Most of the time as a musician, but I was also part of the development team for games like Ishar II and Ishar III, Bunny's Bricks, Robinson's Requiem and Deus.

2) Before we start talking about music, tell us first a bit about your development work on games. What was your role exactly as developer?
Bunny Bricks was the first thing I did. It was done at the start and was more of a test for Silmarils, as they weren’t convinced if they would release this type of game. Silmarils had provided me an Atari ST development kit with their "in-house" framework (more on that later) .
After one week of work at Silmarils' office near Paris, I developed the basic algorithms and the first 2 or 3 levels just before I went into military service. The game was finished by Michel Pernot, author of the Ishar Trilogy, and was indeed released a few months later. As for Ishar 2 and Ishar 3, I did the opening game sequence and the game’s ending.

3) Was Silmarils your first employer? How exactly did you start in the industry?
Yes, Silmarils was the first company I worked for. I started as a freelance composer. I sent in a tape with some of my compositions. A bit later I got a phone call from André Roque, asking me if I would create the music for the game Colorado.

4) What did you study at school?
I’ve always had a passion for development and for music. First I studied Electrotechnics and afterwards I went to music conservatory.

5) Let’s start talking about music and sounds. For the sound effects in the games mentioned above, you were also in charge or was this another person?
Yes, for Ishar 3, Robinson's Requiem and "Deus" I was in charge of sound effects. Although I have to admit, It was NOT the part of the development process that I was most passionate about ...

6) Tell us about the process of creating the music. Which tools did you use for the compositions? Was it done in the “traditional” way? (eg. Using real instruments, writing down the melodies,…) or immediately on a computer?
In general I composed the music on a piano. Afterwards I used Protracker to get the songs onto an Amiga. I sometimes also used Bars & Pipes on the Amiga, which was a very intuitive sequencer, before using Protracker again to create a 3-voice format for the Atari ST and a 4-voice format for the Amiga.

7) So all these games were released on Atari ST, Atari Falcon, Amiga, PC,… What were the most notable differences? What were the constraints on some hardware compared to the others?
"Silmarils" used a cross-platform game engine called ALIS (Actor Language Integrated System from memory). It was a development language only used by them and was created by Louis-Marie Rocques (the founder of Silmarils). So in other words, the games were developed on the Atari ST, but by using this engine it was very easy to convert them to another type of computer. Differences were most of the time in graphics. We could have images in different resolutions/more colors for different kinds of hardware. Sound effects on the other hand were almost always identical.

For the music, in general I made a 3-voice and 4-voice versions of a song, and depending on whether the computer or console could handle it, we integrated one of both versions.

8) What were your musical inspirations?
Nothing very original at the time, mostly movie soundtracks (Morricone, Mancini, Cosma, Williams, J. Barry,…) and I was also influenced by the blues/jazz scene. For the game Transarctica I listened a little to electronic music, mostly Moroder, Jean-Michel Jarre,…

9) Which is your favorite musical composition? (for me it's "Transartica-Artic Baron", that always gives me a very melancholic feeling and it suits the game well). Or are there any that you really don’t like? For which reason?
A lot of parts of the music from Starblade. Transarctica indeed also, as well as "Deus" and the ending music of Robinson's Requiem. By that time, I wasn’t really restricted anymore by hardware limitations, we could do almost anything.

But because I was a developer and a composer on most of the projects, time was always a problem. Creating the music always happened during the last 2 or 3 days at the end of development. If I had more time, I would have been able to make a more polished result.

10) These days with the big retro game boom, many composers (on the Amiga for example) have released remix albums or completely new recordings of their work, have you thought about doing this yourself?
Yes, I have thought about it. I even did one or two songs… but as always, I don’t have enough spare time and up until now, I’m not completely satisfied with the result. I do work on it from time to time (with "Logic Pro X" and even real instruments).

11) Are you still in touch these days with the people from Silmarils?
No. It has been a few years since we last spoke. They went on to create a new company called Eversim after Silmarils was closed down.

12) What has happened to "Ishar 4"? I have found some screen shots on the internet entitled “Ishar Genesis”… Was it really in development?
I left Silmarils by the end of Ishar 3, So I have very little information. But yes, I did hear about the project, but that is about all I can say sadly. I guess you will have to contact André or Louis-Marie, if you really want to know what happened to that project ;-)

13) As a big fan of the Ishar series and in particular Ishar 3, can you tell me where we can find the character “Alkorh”? (It seems they have found his name and picture in the source code of the game)
To be honest, I played very little of Ishar, except during the test phases. In fact Silmarils had two development teams:
- One in the headquarters at Lognes (near Paris), with most of the employees.
- A second one near Nancy, with Michel Pernot and Pascal Einsweiller who developed the "Ishar Trilogy”. So I’m sorry, but you could ask them if you want to get an answer to that question ;-)

14) Do you still make music? Professionally?
Yes, I’m always composing music, but only for me personally, nothing professional anymore.

15) Are you a game fan in general? Do you play games today ?
No, very little. Apart from Top Spin 4 on XBOX 360 once a month, which I play very rarely.

16) What do you do as a profession these days?
I work as Director of Operations in an IT services company.

17) How do you want to end this interview? Have you got something to add? Any words of wisdom? ;-)[/hotspot]
Even in my professional life, I regularly come across people who have played or knew the games which I helped develop. Although all of that took place a very long time ago, thinking back and talking about it, brings a smile to my face.

In the company I’m currently employed, 2 or 3 of my colleagues are still obsessed with 8/16 bit computers like the Atari ST and Amiga. Even our head of accounting was someone who had a big influence in the field of videogames.

The birth of the consoles and personal computers, the rapid evolution in hardware and the remarkable work that has been done gameplay wise, the possibility for each one to develop games at home (the bedroom coders) … All of this has contributed in the creation of an environment for the technologically passionate, the "geek". I am astonished by the number of retrogamers I greet every day down the hallway!

A while ago, we did a full retrospect on Alien Breed clones for the Atari ST. If you missed out on that video, go check it out now. Today, we conclude the story on one of those games, Alien Blast. Francois Wunschel was the graphics artist for this project and he shares another great deal of insight in the making of this game, filled to the brim with ST and demoscene nostalgia.

Andrew Pomianowski was half of the team behind Starball. Andy did all the graphics using Degas Elite. He was inspired by the legendary Bitmap Brothers and much more. In this interview, he shares some of the details in the creation of this classic PD arcade pinball game.