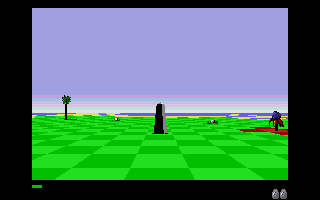 In Archipelagos you get the feeling of travelling INTO the screen/landscape rather than just left to right. 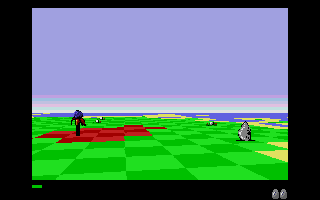 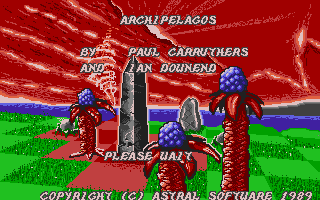 Archipelagos came out in 1989 and received rave reviews at the time for atmosphere, originality and speed of graphics. It's certainly a game I've never quite forgotten. Not heard of it? Read on then...

3D graphics were a novelty back in 1989 - especially solid (as opposed to wireframe) 3D. Virus had come out before and maybe 1 or 2 others but 2D sprites were very much the order of the day. Archipelagos combined both - you get the feeling of travelling INTO the screen/landscape rather than just left to right, but at the same time, the things you interact with (trees, stones, monolith) are sprites of various sizes depending on how close/far away you are from them at the time. Also unusual was the ability to wander anywhere and "pan" left and right to see where you wanted to go next - at the time, it was one of the few games that felt like you were "in" the play area - way before the 1st person shoot em ups you get today.

The best ST chip soundtrack I've ever heard. Almost has a "Tubular Bells riff" feel when it starts - its incredible what David Whitaker got out of that chip! The music has repeated bits, sparse tinkly bits, scary atmospheric bits. Play the game and the soundtrack is there playing in the background - never obtrusive, just giving you the willies and adding to the suspense. Then when you're in the "beat the clock" bit where you have to find the monolith the music changes to up tempo and gets faster and changes key upwards to signify you're running out of time - and generally causes you to panic on more difficult levels. A soundtrack that does its job as a soundtrack. Spot effects throughout for the destruction of stones etc are also chip generated and are fine.

Yeah great, but what do you actually DO?!! Well...this is the bit that makes little sense - it makes more sense when you play it. You have a certain amount of energy to start; you move around by clicking on squares of ground to make it grassy green so you can walk on it, using up a little energy as you do. Replenish your energy by clicking on cabbage like things growing in the ground here and there and absorbing THEIR energy. The idea is to find a number of stones dotted around each level - when you get close enough to them, click on them to destroy them, then go to the next. When you've got them all, you're then against the clock to find the black monolith and destroy it before your time runs out.

"That doesn't sound hard". No it doesn't - but as you go, you have these poisonous palm trees sprouting up all over, poisoning the ground so you can't move onto it without repairing it and then making it green - which all uses your energy. So its strategy in the main, but very atmospheric strategy and certainly has that "just 1 more go you sonofabitch" feel without being too difficult to understand - the levels start off easy and get you trained before they get harder. How many levels? I'm pretty sure it was hundreds. I don't know anyone who finished this, put it that way!

I love this game - I have loads of games on my original 1988 STFM of which only a few get dragged out for a nostalgia fest every now and then - this is still one of them. Original concept, thoughtful gameplay, good graphics for the time, excellent soundtrack.