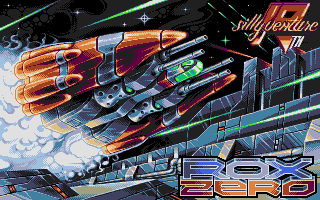 The title screen is awesome! What else is there to say? 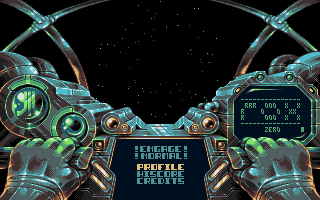 This screen allows you to choose a mode and create a profile. 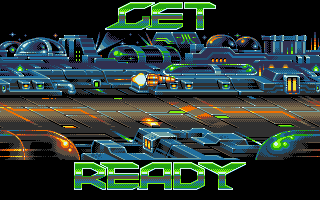 Are you sure you can survive for a while? 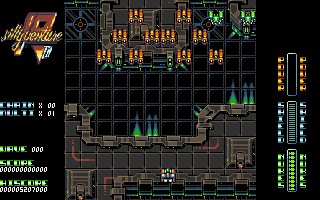 The game starts. The first few seconds are really easy, but then, things get complicated quickly. 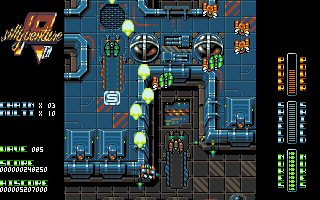 Your firepower can be increased, but be careful: don't waste it unnecessarily by continuously firing. 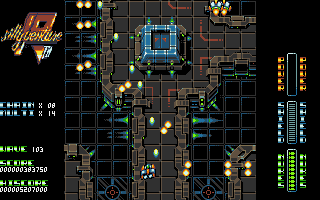 Look to the left: the Multi counter will pleasantly increase your score. 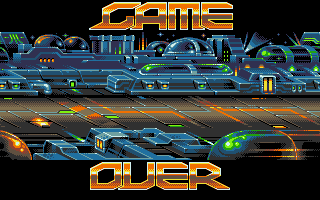 Is this already the end? So let's start again. Just another one, please. I promise this will be the last one, Mom.

In 2009, Tomchi and his other group members released r0x, a surprisingly good game in which you had to avoid asteroids and collect various bonus items. For the Silly Venture 2018, Tomchi is back and releases a new opus to the r0x saga. Entitled r0x zero, the game is more of a pure shoot'em up compared to the original game. Now, you have to shoot all the enemy ships, avoid their incoming fire, and need to collect various items. These bonus items allow you to boost your defences or improve your arsenal of weapons. A classic shoot'em up in the end? Yes and no. r0x zero renews the genre with some tricks. It is also one of the best shooting games created on the Atari STE with its frenzied scrolling, its catchy music, its superb graphics and its perfect realisation. You still have doubts? Then dive into this review, and don't hesitate to tell us what you think. I'm pretty sure you won’t regret you tried it.

As soon as the title screen appears, the tone is set. The design of the game is wonderful and the following screens confirm the feeling. Graphics are signed Vierbit, with additional work by Heavy Stylus and C-Rem, the same guys who had worked on the first game (Templeton, however, disappeared from the 'r0x zero' scene). The little ship you control is simple, but detailed, just like the enemies. The sets are also very attractive, but they also know how to be discrete. You can immediately spot enemy ships, with their excessive sprites and colours, which is not always obvious within the shoot'em up genre. This is probably one of the great strengths of the game: visually, we do not get lost in the details and we always manage to find ourselves, even when there are more than a dozen sprites on the screen. It's pure, it's clear, it's beautiful.
Incidentally, we notice that even the credit screen, which is usually a fixed screen in other games, is a visual treat. It is a horizontal text scrolling full screen (no left and right borders) accompanied by some new music. Again, it is pure class.

The tunes were composed by some of the biggest names in the demo scene. The likes of Tao (my favourite composer, it's no longer a secret), Dma-SC, Excellence In Art and Stu (who are all just brilliant). If the tunes by Tao and XiA sound familiar, those by Stu and Dma-SC seem to have been written especially for this game. They blend in perfectly in the atmosphere of this shoot'em up, even if we would have liked the main theme to go on and on: it is that good!
As for sound effects, some people may think they are too discrete and too "nice". Maybe some explosion sounds à la Wings of Death would have been better. But at least, the SFX don’t pollute the soundtrack and they don’t create an auditory mess.

The game system is based on Self Destruct, a title created by developer Terry Cavanagh in 2008 on the PC.
Don’t be ashamed: Yes, 'r0x zero' is a pretty hard game at first. If you’re not super-seasoned, even in normal mode, your ship can be destroyed in less than thirty seconds. There is no real credit system that would allow you to take over where you left off. Fortunately, Tomchi has integrated three game modes: 'Noob', 'Easy' and 'Normal'. The Easy mode is welcome and allows you to get better acquainted with the different types of attack patterns of the enemy ships, the bonuses to pick up, etc.
As it's written for STE machines only, 'r0x Zero' requires a JagPad, since it needs 3 buttons to play, in addition to the directional cross that allows you to move your ship. The A button is used to shoot enemies, the B button to protect you from incoming red bullets and the C button to destroy everything on the screen (Nuke). 'r0x zero' also features new ways to increase your score: 'Chain' indicates the number of enemy ships shot consecutively without suffering any damage. When you reach 10 chains, you get one point in the 'Multi' section. And the more points you win in this section, the more you get in your final score. However, if you play via either the 'Noob' or 'Easy' mode, the 'Multi' counter is blocked past a certain level, while the 'Normal' mode has no limit.
If you play with an emulator like Steem or Hatari, you may be discouraged from using the keys of the keyboard: this is particularly unplayable and we had a hard time staying alive more than a minute. On the other hand, once the joypad is configured, it's a real pleasure: the ship is particularly manoeuvrable and the vertical scrolling offers an incredible fluidity. The gameplay is just perfect but again, some practise will be required before playing in normal mode and beating some of the high scores. I wish I was as skilled as Xerus (who currently owns best score in this game), because I’m sure 'r0x zero' has more hidden features. I need to practise more, I guess ;)

There is no need to hide it: I love this game. Of course, there isn't a background story (who needs one in a shoot’em up anyway?) and destroying/avoiding all other ships is mainly all you have to do. But it won first place at the Silly Venture 2018 coding party and that’s fully understandable. The scrolling is fast, the graphics are incredible, the music is groovy and the gameplay is addictive. Also the 'Chain' + the 'Multi' options are a brilliant idea. If you like Wings of Death, Xenon II or Goldrunner (just to mention a few hits on the Atari ST, but there are so many…), this game is made for you. Even if you don’t like this kind of game, just give it a try. You won’t be disappointed. A pure gem, indeed!

The game can be downloaded here:
- Files format
- MSA format

AtariCrypt
Just loaded it on my MSTE... doh!!! What a wally I am... No Jagpad ports lol (I'm crying really)
November 8, 2018
AtariCrypt
What an awesome review and this is definitely something I need to play :)
November 5, 2018