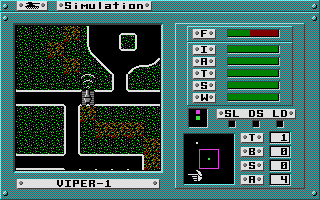 The arena in action. 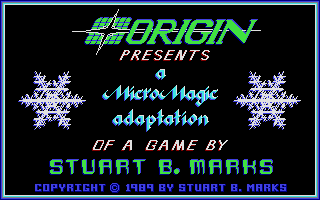 Origin ... They would later move on to create the Wing Commander series... 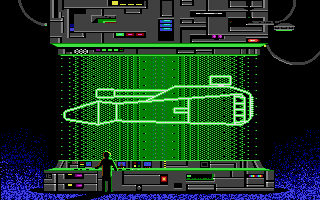 A glimpse of the intro. 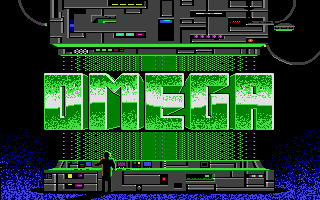 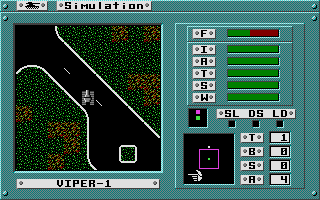 Omega was one of the first multiplayer games, with publisher Origin hosting its own BBS were players could meet! 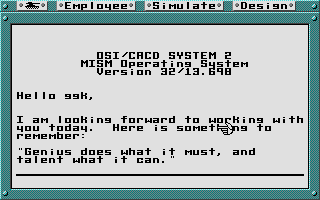 The scripting was the sort of thing that would bend the player mind and I'm sure was good for an upcoming developer in the late 80s... 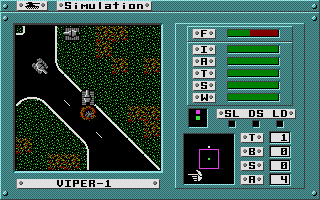 Omega is a game you could really get into. If you don't have the time... forget it, you are dinnered.

Omega was released around 1988 or 1989 for numerous platforms, from 8-bitters like the Apple II through to 16/32-bit platforms like the Atari ST (and Amiga?) where I experienced it. Let me quickly summarize and say...its a game whereby you assemble and arm robotic tanks and 'script' or 'code' their behaviour for combat in an area filled with other 'coded' tanks.

Historically, I know of a few (not many!) 'coder' games, such as the classic C-Robots (and variants), though at the time this was I think a first for me (aside from screwing with bad Logo samples in the Atari ST Logo book. In the last few years a couple of games have come out like this, but its essentially a lost genre. While 'construction set' games (Adventure Construction Set, Pinball Construction Set, Wargame Construction Set...) flourished and eventually evolved into the enormously popular modding community we have now, there seems to be no active replacement for this interesting game style.

Now, I'm 'reviewing' from memory as I've not fired up this game in more than ten years I'm sure, yet it will forever be imprinted upon my brain -- games with a multiplayer component were rare (even if this was a non-live form of multiplayer - but I'm ahead of myself.)

Omega was essentially a rudimentary IDE - a shell that offered several subsystems: a tank designer, a script editor, and a runtime arena for the actual combat. This was cool stuff, but what made it freakishly addictive was the primitive online component -- with a modem you could dial up to the Origin BBS and hang out with fellow players to share strategies and scripts, and most importantly -- share tanks for running in your arena. Furthermore, Origin hosted tournaments whereby players could submit their own tanks for running in the master arena round robin, with the winner getting... well, I didn't win so I don't recall!

Tanks were built up from a number of futuristic components - a chassis, a weapon, a scanner (for 'seeing' the board), and I think an engine or motor. Essentially, the player could control numerous aspects of the tank though I think you had limits that were raised as time went on (a cashflow system perhaps? My memory fails..) The trick was 'fatter' tanks weren't always the most desirable -- many very successful vehicles were smaller and faster with lighter weapons (and smaller script as well) Still, there were only so many physical design constraints, though I recall pouring over the options to suss out slight advantages with various combinations until my brother (a few years older than I) whipped up a matrix and determined 'best fits' for various cases. He always 'breaks' games...

Scripting was the real meat of the game, however. You could pretty much do 'anything' (as far as I was concerned) you wanted, and it definately stroked the ego of a young coder-to-be as it rewarded devious scripts (though being a highly primitive language proved frustrating since I knew there was better out there.) The game was nearly identical (in terms of features) on the 8-bit platforms, though delivery was sharper on the 16-bit machines (running smoother and a little fancier) - this allowed even battles between tanks designed on a Commodore 64 and an Atari ST. However, the 8-bit machines had stiff limits and so these same limits carried over to the 16-bit platform versions -- a tank could only have so much script 'code' to control its AI brain. To cover this up, the Origin developers put in a 'AI size' system whereby new players were limited to a short amount of script, and after they'd conquered a number of 'bosses' their script size limit would be that much larger - though it would never be large enough for really complex scripts. Still, this size limit forced a certain clarity of vision upon the player -- building too many ideas into the script just wouldn't work out, so better to refine one strategy and implement it as tightly as possible.

The game designers further applauded the good scripter ('good' in terms of the Omega language, not in terms of real coding) for making small tight pieces of logic as each 'instruction' to the tanks virtual CPU cost a certain amount of 'time' and thus a tank with small logic blocks and fast weapons could out-maneauver a slower thinking heavier tank. Cool stuff.

The language was a primitive dialect of BASIC, with specialized commands for various operations such as 'move forward', 'rotate tank left', 'rotate turret right', etc. Each command took a time slice to complete, often depending on the class of tank component involved. For instance, if a player tank had a "90 degree scanner" (as opposed to say 30 degree scanner) then a 'scan' (the tanking seeing whats in front of it) would take a few moments, while a 30 degree scan was faster (if memory serves.) Naturally, it was more efficient to get a 90 degree view with a 90 degree scanner than 3 scans with a 30 degree scanner (since you'd have to scan, rotate the turret, scan again, etc), though if your logic was designed just so then perhaps you might not need a wide scan to operate effectively.. as you can see, the interplay between your script and physical design became crucial.

An example I recall was a boss tank - the Panda. If memory serves, that sucker would work its way towards a corner of the map (a real corner, or a corner made in the trees of the chessboard-like playfield) and camp out, with a 90 degree scanner. It would scan every few moments (but not all the time) since it was guaranteed to see most of what it cared about since being in a corner, and thus it could spend its time firing at approaching vehicles. I remember it being a challenge until after watching the arena a few times and realizing that the player tank had to be customized to attack it differently than another tank...

Lastly, some very cool operations where included. There was a limited form of tank-to-tank communication so the player could operate a team (of his own tanks). This sort of scripting was the sort of thing that would bend the player mind and I'm sure was good for an upcoming developer in the late 80s... though I also recall it wasn't really useful, as tank-to-tank comms took a few timeslices and left you vulnerable to faster tanks.

The arena was simple -- select a map (you could download new ones, or make your own I think) and however many tanks you'd like, or play through a campaign which was a series of contrived map+tank combinations (where the enemy tank was created to fit the map well). While the arena was running, you could see a 'satelllite overview' of the playfield -- a green pixel representing a forest square, a brown pixel flat dirt, and various colours for tanks. You couldn't see a lot, but you could see a devious tank burning down trees and coming around behind your tank -- enough information so you could design a tank to work better next run through the gauntlet! Remember, while the arena is running the player cannot interact with the tanks -- the script would live or die on its own merit, and you could alter it for the next run.

After beating the included boss-tanks (10 or 15 maybe?) you were pretty much done -- we didn't know anyone else with the game, and my brother was nearly always a better gamer than I -- so I had to ring up the phone bill. Being a young idiot at the time, I was forever in trouble with my parents for abusing the modem and dialing long distance to the next city over... or the next country over, in the case of Origin's BBS. Still, we had to fetch down new tanks to war against, and I even submitted into the tournament (and got creamed) a few times. This was the shiznitz of 1989!

Some of the best tanks we fought against were downloaded from the BBS -- former tournament top-placers. You'd download the 'runtime tank' only, not the human readable script, so would have to run through the arena endlessly to figure out their behaviour. I remember one - Panther (I think; some jungle cat name) - took us weeks to really master, and even then it'd take us much of the time. This sucker had a sneak-attack mode and a run-into-the-trees mode, and was coded quite efficiently -- it would escape in such a way as to either get away (to return and attack later) or to be followed where it would get the advantage. Traditionally, our tanks would 'track' after another tank and this guy would just trash you if you followed after him. (If memory serves, this sucker would dig a passage into some trees, and when it saw you behind it would just start firing without looking for awhile -- a very fast way to shoot, especially with its fast medium damage weapon.)

Clearly, this game was one you could really get into. If you didn't have the time... forget it, you were dinnered.

At a Atari User Group meeting, Martyn brought it up.. so there were others I suppose...

Omega didn't look or sound as pretty as it could have (likely due to its 8-bit and 16-bit cross platform action) but it was very deep and addictive, something a lot of games still lack today.