If you have already seen some TSC (The SyndiCate) menus, you will probably know the famous tunes they contained. This was the work of one man: Frazer. He was a member of the Reanimators, who also released some code for Automation as well as making their own menus. 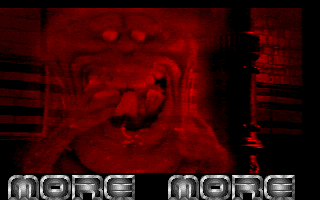 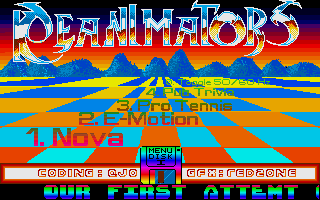 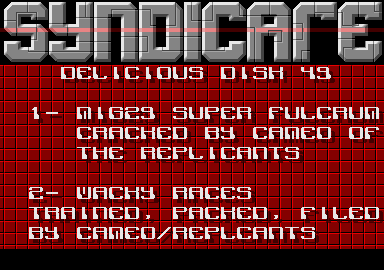 Delicious Disk 49 by The Syndicate 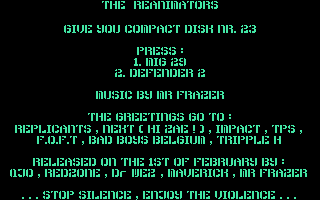 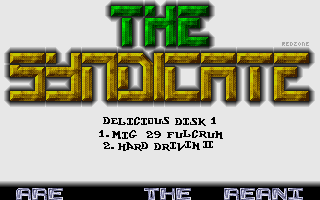 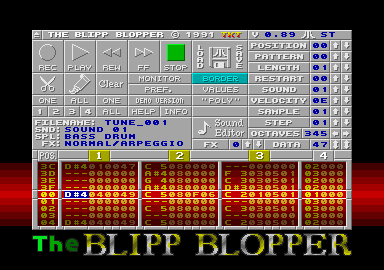 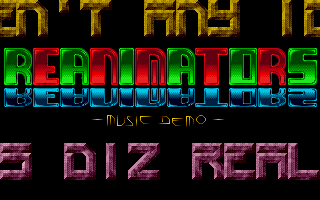 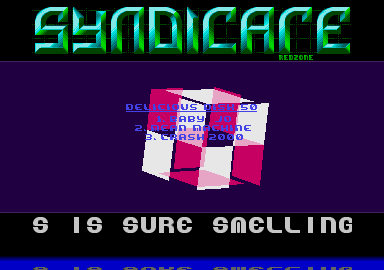 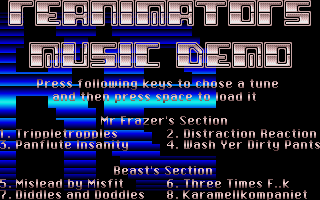 1) Can you introduce yourself? (age, country, job, passion...)
My real name is Andreas Franzén, and I'm a 27 year old dude from Sweden. Currently I'm out of a job and will go back to school this fall. My passion is as you might guess, music. Even though I've stopped writing music on the Atari a long time ago, I haven't given up on music. I think that is something I will continue with for a long time, and hopefully I will have finished some of my current tracks someday soon and can release them.


2) When were the Reanimators born? How old were you?
The Reanimators were founded in 1990, or perhaps late 1989 (my memory is a bit fuzzy when it comes to precise dates


3) Who were the other members of the crew? Friends or just contacts?
The crew started with Qjo (code), Redzone (graphix), Iceman (swapping) and Cyborg (swapping). Later on myself and Maverick joined, Cyborg left us and Iceman changed his handle to Dr Wez. Of course we had more members later on, like Beast and Mig, but these are all the members of RAM during the 26 disks that we released. The rest joined in when we started producing the "Delicious discs" as The Syndicate.

At first, TSC were an alliance, so Reanimators was still our crew name. But later on we took that name for our group, mostly I think because we produced most of the Syndcate's stuff ourselves anyway. By that, I don't mean to say that the alliance TSC had some other really great contributors. Just check out our discs, and you'll see for yourselves.

Our crew has had a lot of different members during our time on the scene, and I can honestly say that I can't remember all the names - my apologies to all of you that aren't mentioned here. But we started out as just a group of friends who were having a good time and the core of our crew were always that group of friends. Sadly, a couple of the founding members (Qjo and Dr Wez) left us, but all the other members mentioned in the beginning held together until the end. Some of us are actually still keeping in touch.


4) Why did you make compilations of games?
Well, I was never involved in that decision since I joined in later on. But it was a good way to get stuff out quickly, demos are much more time-consuming than intros. And we had of course all seen the compacts done by legends such as Automation, and tried to do something similar.


5) Which cracks did you use?
Hmm, we used a lot of different cracks actually. But there are two names that comes to mind, The Replicants and The Empire. If I'm not mistaken, we even had some cracks of our own, though they were never that many.


6) Were you in contact with other crews?
Of course we had contacts with other crews, but my memory seem to fail me once again. Some of the names that I do remember were Automation, Awesome, Animal Mine, Mad Vision and many more. Personally I never had that many contacts during these years as all the trading was done by other members.


7) When did you join The Syndicate?
RAM were one of the founding crews of The Syndicate, so we were in from the start. I myself became a member around RAM #20. My first musical contribution to the group can be heard on RAM #15 (sound intro on the menu) and shortly after that I joined.


8) So did the Reanimators disappear?
That's a tricky question, since we just changed the crewname to Syndicate and kept on producing stuff. The last thing we ever did on the Atari was released sometime 1992.


9) Which tools did you use to compose your tunes?
Well I used a lot of different programs. TCB tracker, Blipp Blopper, Trisound, Megatizer, Audio sculpture and ProTracker. For sampling I used ST Replay.


10) What is your favorite game(s)?
I'm guessing that you mean Atari games. My personal favourite is definitely "Dungeon Master", I can't count how many hours I've spent playing that game. "Populous" was also among the favourites, as well as "Midimaze" (multiplayer network action long before games like Quake).


11) What is your favorite demo(s)?
All the classic ones like Union, Cuddly, Mindbomb etc...


12) Are you still active on the scene? Do you plan to release new compilations or demos?
Nope. We are, like they say, history.


13) Do you remain in contact with other members of the Reanimators and TSC?
As I said earlier, I do have contact with some of them. Maverick and Mig are the ones who I hear from the most frequent, and I got a mail from Beast just the other day.


14) What do you think about the "comeback" of people such as D-Bug, Oxygene, Equinox and others?
I think it's really cool that there still is a living Atari-scene. I've checked out some of the more recent releases and they are truly amazing.


15) What's your opinion about emulation?
Emulation is great, especially with the newer emulators like Steem and SainT. It's a great way to preserve the memories of all the great crews that were on the scene, and a great way to again be able to play all those wonderful games that were made. This is after all an essential piece of history in the world of home-computing, and it is cool that younger generations are able to experience some of the things we did.


16) A last word?
Once again I'd like to apologise to all of the other members of TSC, but I could hardly keep up with our frequently changing members list even when we were still active. My main motivation was after all just to have a good time with my friends. I'd also like to say that this is all written as I remember it, and I think I got most of it right. But please don't hate me if some of the details are not 100% correct

It WAS a long time ago.

Thanks a lot Frazer. Glad to meet you!