Euroswap was actually the merger of 4 French groups (Password, Exo7, Notorius, The Killers), which specialized in making compilations. All their menus were numbered in descending order, starting from the number 1000. Euroswap has always held a special place in my heart, because its members knew how to make quality menus, while maintaining a good state of mind, friendly and without arguments. In 2002, we had the chance to interview three members of Password / Euroswap, including the founding member of the team.

1) Introduction
2) Birth of the group
3) The other members
4) The demoscene
5) Euroswap against Supremacy?
6) Code, crack & swap
7) Preferred software
8) Favorite games and demos
9) The end of the ST adventure
10) Other platforms
11) Memories, memories...
12) The current scene
13) The emulation in question
14) Projects in progress
15) Final words of wisdom

1) Hello everybody. Can you introduce yourself in a few words (age, job, career, etc.)?

Laurenzo: I'm 42 years old. I'm in Human Resources (but now I'm starting from scratch). My passions are mainly music (techno / house / reggae / rock) and computer science. I am divorced and I have an 18 year old daughter in my care.


2) When was the group born exactly? Under what conditions?

Laurenzo: It was Dr Trap who invited us to a copy party.

Sark: Around the year 1992, I was on RTEL and I was in contact with a member of ICS who was looking for a swapper in the Paris region. We met and started to swap exclusively for them. Some time later, I had a nice contact on RTEL with a guy named Vincent (Supremacy) who was also a swapper. One day he had a dinner party and I met Laurenzo who swapped for The Replicants. Rather than competing against eachother in a race of quality and speed, we partnered up since we had two different sources of games and founded Passwords with other friends, swappers and coders. We also had competitors for the swap (I can not remember their name); I contacted their chief on RTEL and we joined our networks and created Euroswap.

Darko: Actually, Sark and Laurenzo asked me to make CDs for Passwords when they saw my Noware compilations (the first group I created). We created the new name Euroswap. It was a bit ambitious, but oh well...


3) How many members did the Euroswap union count?

Laurenzo: Whew, I have to watch the intros! Many guys came in and out of Euroswap ...
The main members at the beginning were: Sark, myself, The Cop, Testament, Archon ... all within the Paris area. Afterwards, we grew a lot and recruited members in the provinces: Darko, Killers, Achernar, Nurse, The Arrow, Header / Warrior, Kovax, GFA, Phymax, Shiver, Amigdal, Antaeus, FTL, François, Doctor X, Skywalker, SPA 160, ST 123, Sademan, Unlawful, Winner, Zastaph, Ynexys ... there was a period when Euroswap had about 20 members throughout France, Belgium and Switzerland. I remember that Euroswap was created about 2 years after the creation of Passwords. Euroswap was composed of 3 groups: Passwords, Killer's Group and Exo7 ... Killer's group and Exo7 did not swap or at least very little: they were in charge of the intros, of which, Exo7 made some very beautiful ones.


4) Why did you choose to compile games? Have you never been part of the demo scene?

Laurenzo: Personally I coded a bit (I did some intros), but not enough to make demos. I participated in several coding parties at the time, but more as a pirate than a coder! In fact, it also happened on coding parties we handed over some original games to the Replicants or Fuzion. They on their turn cracked them ... live. We then made the compilation. The choice was natural: with my contacts, I had absolutely everything that came out of the Atari cracking scene.

Laurenzo: No, we can not talk about a war with Supremacy but only with some members, as we were friends with others. For example, Kovax and Archernar were both in Euroswap and Supremacy, although Kovax got confused and left Supremacy quickly.
Our main enemy at Supremacy was Corpo, who was a mental patient, who did everything to confuse us with ICS and the other members of Supremacy. And he did not appreciate that we 'stole' their cracker Kovax.


6) How were tasks distributed? What relationships did you have with other groups?

Darko: Initially, I did everything from A to Z on CDs. Lolo provided me the goods, when we became more famous we got in direct contact with the groups of pirates. Everything was happening on the Minitel 3615 RTEL - big time! After a while some groups started making intros for us, Laurenzo started making CDs, and I did a little less.


7) What were your favorite software tools?

Laurenzo: Obviously copiers, compacters, Deluxe Paint and all that is used for intros, disk copying, file compacting and sound/graphics ripping.

Darko: My favorite packer was Speedpacker 3, we couldn't do any better once we started using that one. Otherwise, the program I used the most is of course Fastcopy Pro ...


8) What were your favorite demos and games?

Laurenzo: Delight's demos have been my favorites ... especially on Amiga! As for the games, Dungeon Master and Cannon Fodder were my favorite ones.


9) When did the group leave the ST scene? Why?

Laurenzo: Nothing was released anymore and all the groups went to the Amiga. We were one of the last on the ST. Just see our last compilations and those of Fuzion (where we are greeted)...


10) What became of Euroswap afterwards?

Laurenzo: We continued on the Amiga (some compilations as well as cracks) and we still exist on the PC ... very discreetly. But we also make some compilations of games, with French versions when we can!

Darko: Whilst on the Amiga, I tinkered with a few things but it was not fun anymore. The Amiga scene had nothing to do with the Atari scene, mostly bragging guys or basic badgers.
On the PC I have relocated the menus of the Passwords CDs but I didn't really participate. I didn't have the time nor the desire anymore.


11) What are your fondest memories of the Atari times? Some anecdotes perhaps?

Laurenzo: The good times:
- We did not take the lead and we did it for fun.
- Sitting in front of our screens, watching demos, making copy after copy... Coding intros and music.
- Passwords beat Fuzion at the Aquaboulevard bowling alley and got paid for this at the restaurant.
- There was a magazine that advertised us at the time of the copy party report where we (Killers and me) were attending. This magazine reported the presence of the pirate group Euroswap, affirming our courage to be there 'unhidden'. I think we're the only French pirate group on the ST to have free publicity in a magazine!

Laurenzo: I know PaCifiST well, but not the new emulators. I'll have to take a look at their improvements (also STE & Falcon emulation that I don't know of). I think it's good to be able to find our intros and compilations of the Atari and the Amiga.


14) Do you have some projects you want to talk about? (all platforms combined)

Laurenzo: I'm thinking of a website in the style of yours, but with our compilations from the Atari and Amiga scene.

Laurenzo: Thanks to you and all others who have kept a little bit of the spirit of the ST scene alive. 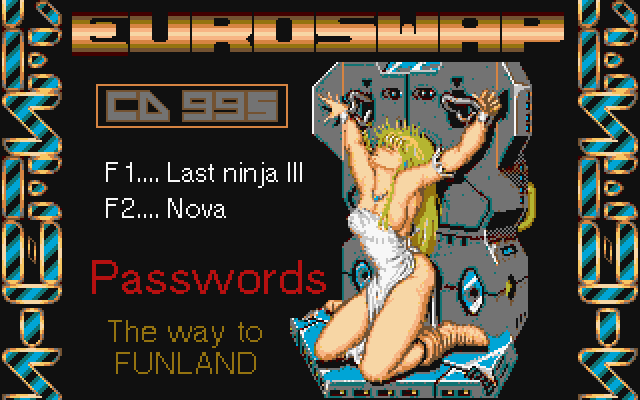 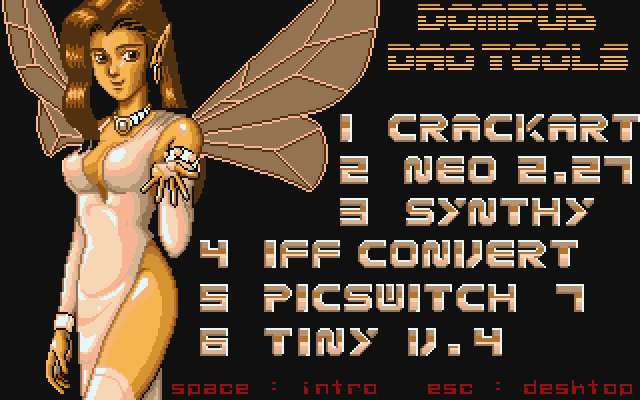 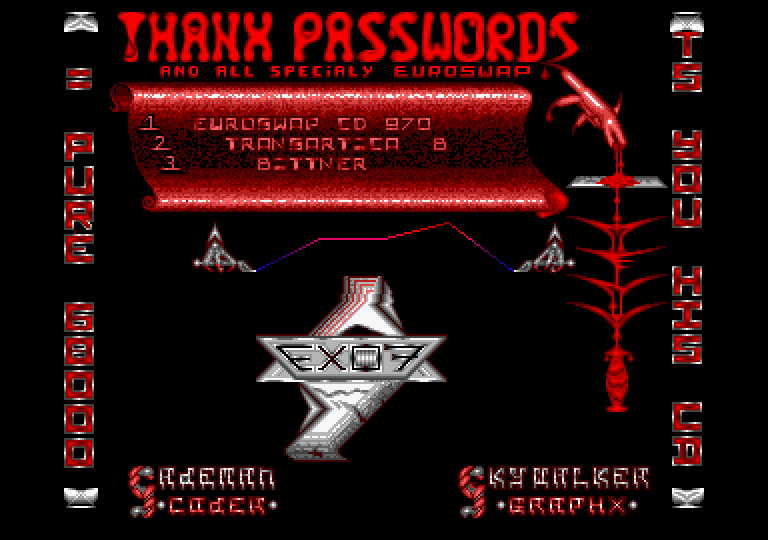 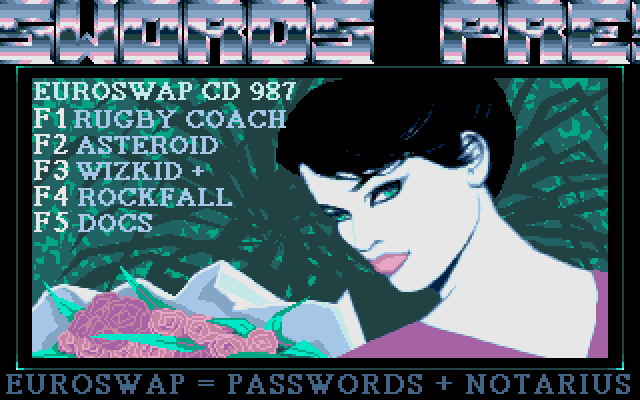 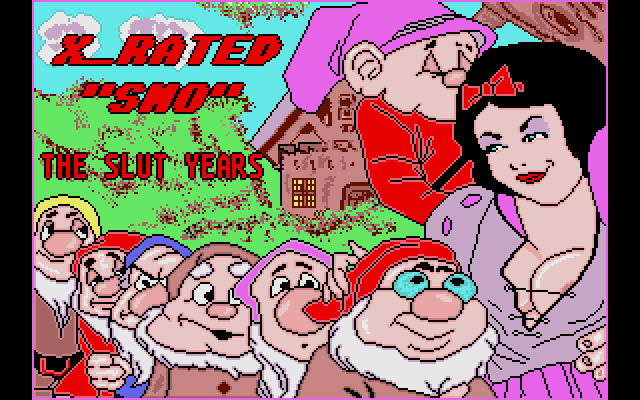 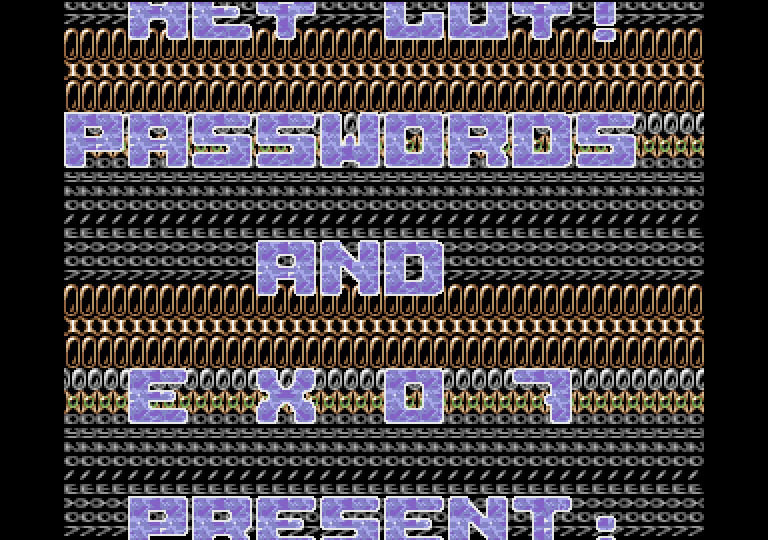 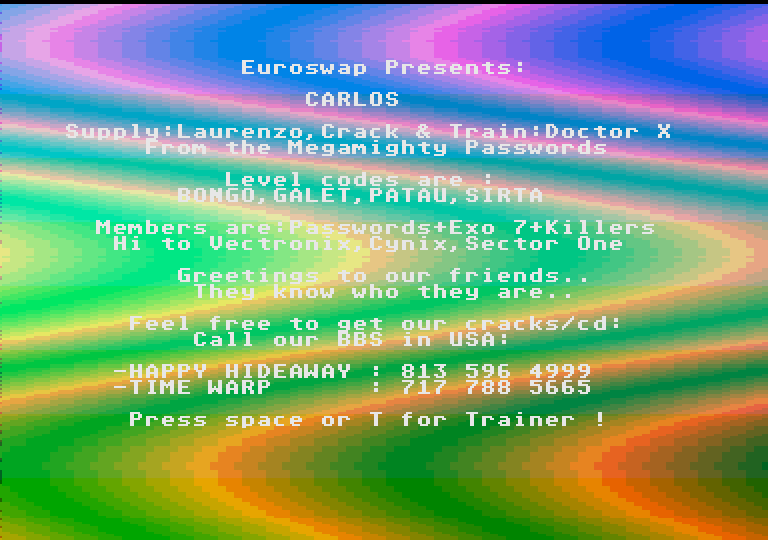 Intro for the game Carlos 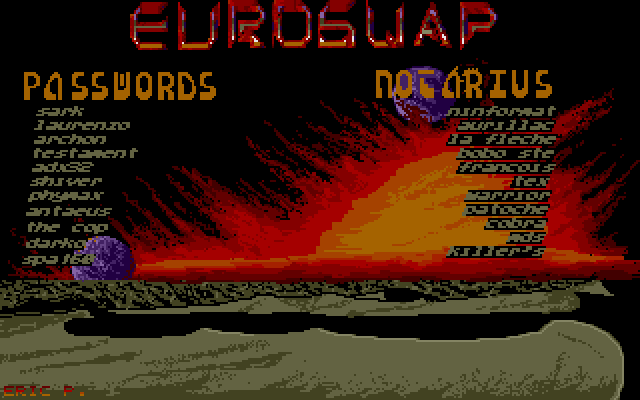 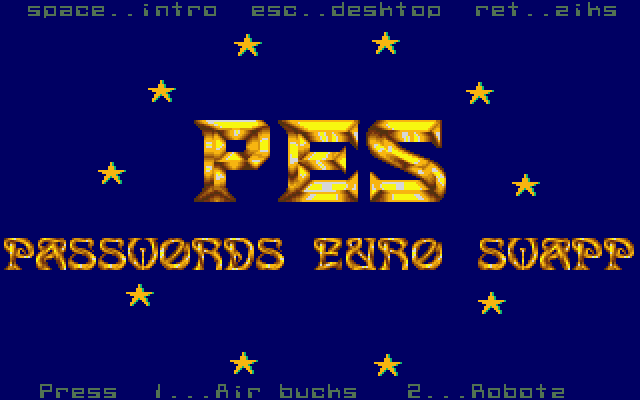 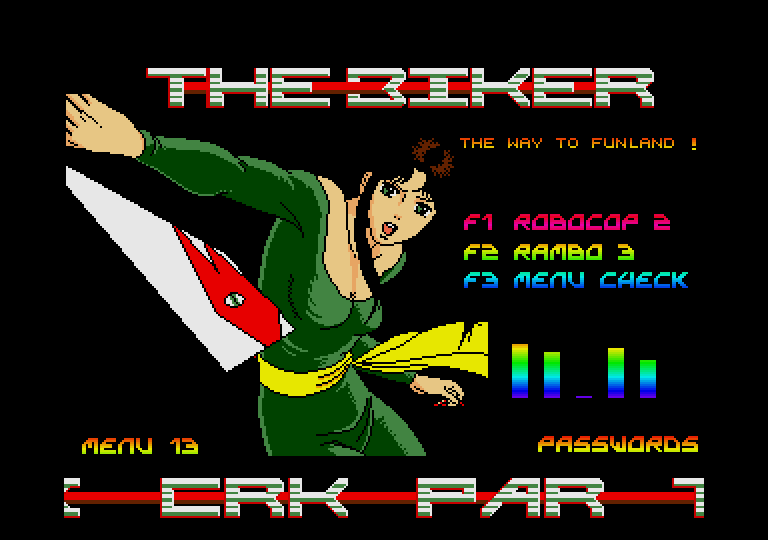 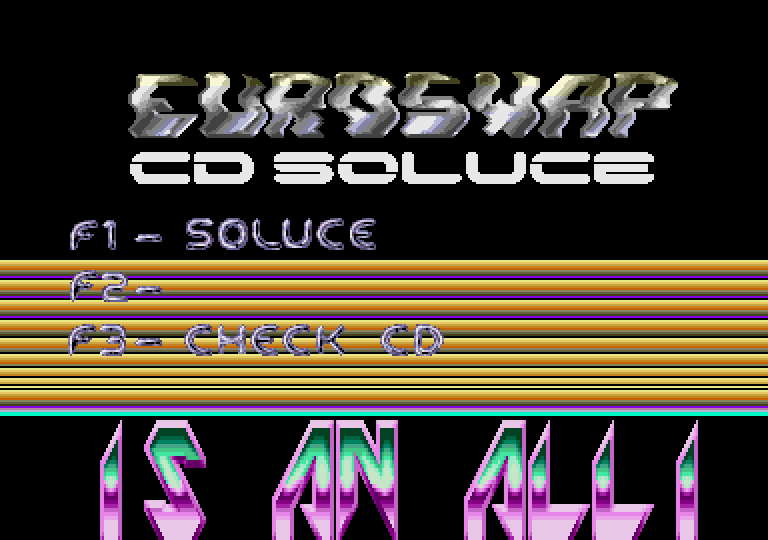 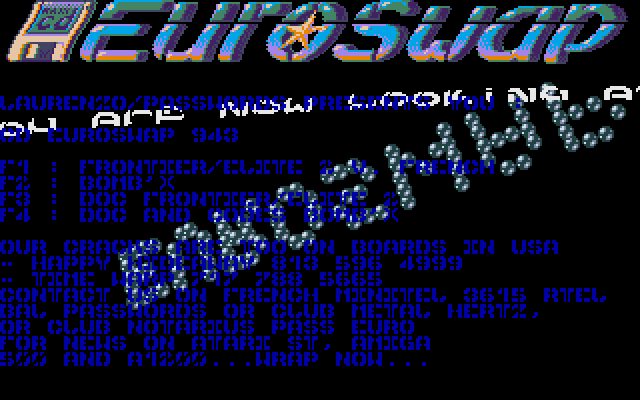 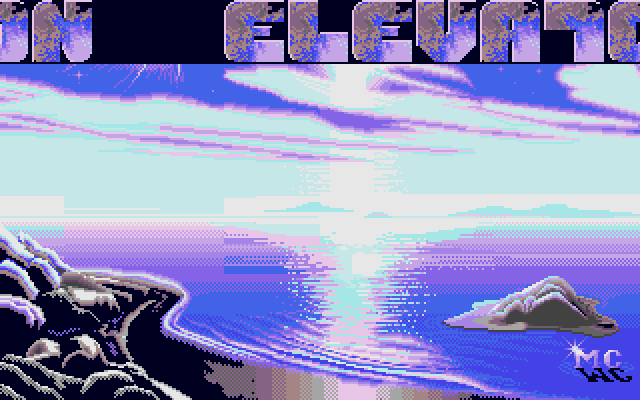 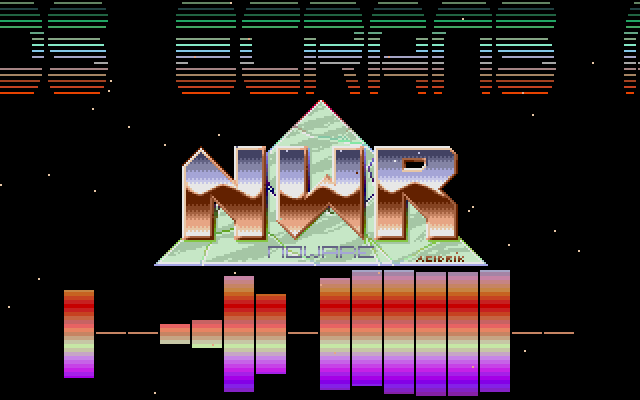 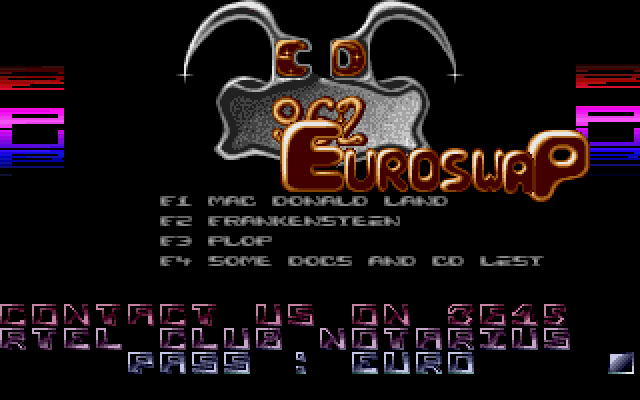 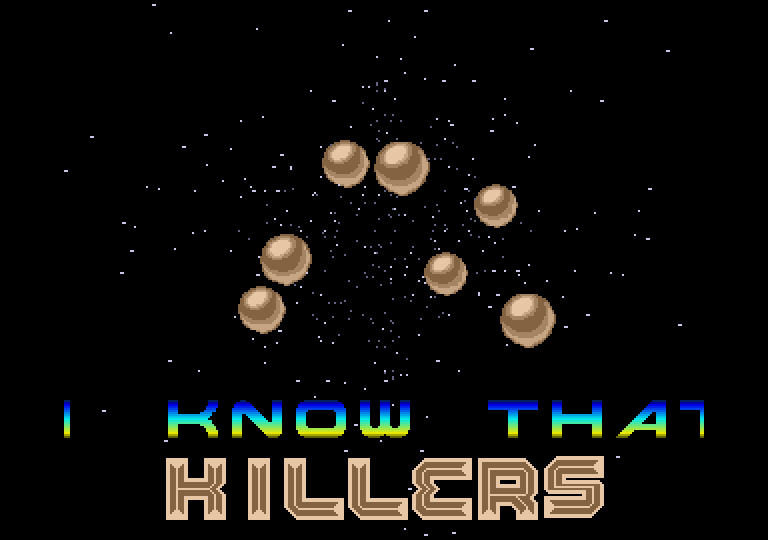 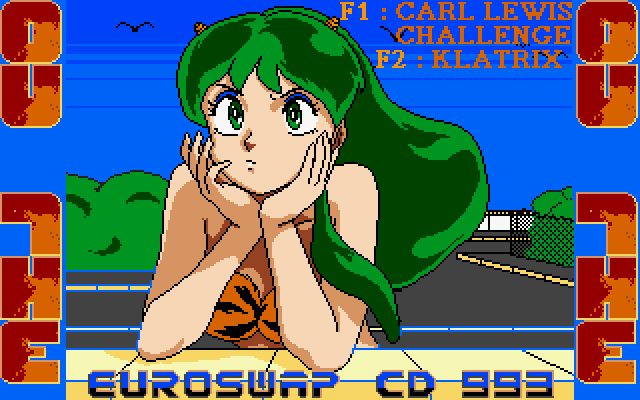 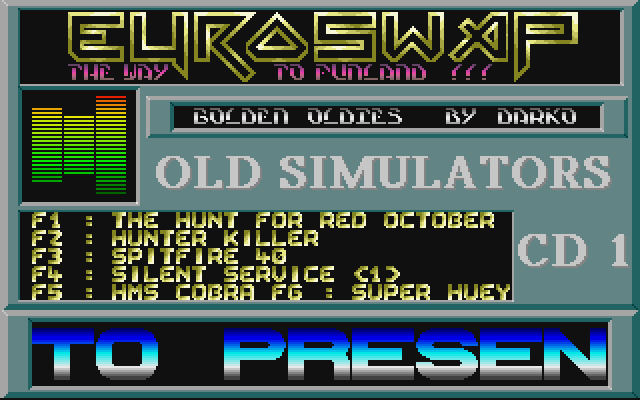 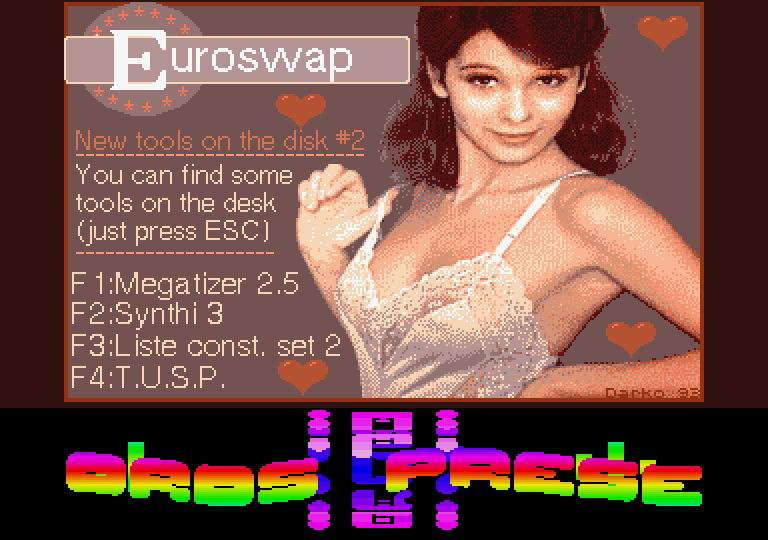 New Tools On The Disk 2 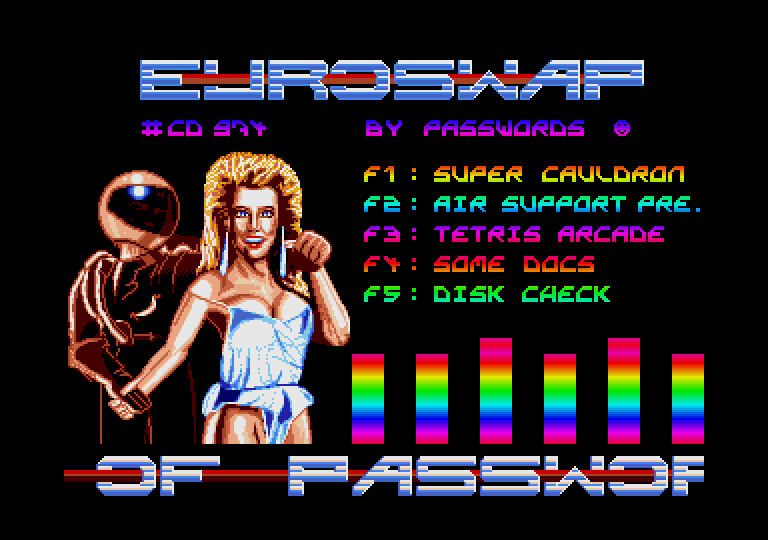 When I witnessed the first ever glimpses of a technique called Voxel Space, my jaw dropped to the floor. That was in 1993, on a friend's PC, and the game was called Commanche : Maximum Overkill. Little did I know, that this was also possible on an Atari ST. And when reading the thread on Atari-Forum about a possible new game for the Atari family of home computers called Vergeworld : Icarus Rising, I had to get in touch with the guys from Retrobones to learn more. Excited yet? Check this out.

Lately, some great Atari-related books have been released for all of us fanatics. One of those titles is Atari : A Visual History from one of my favorite graphics artists, Darren Doyle. Although this book is not Atari ST related, it covers all there is to know about the Atari 8-bit. Knowing Darren's work I participated on the Kickstarter and boy, ever since the book arrived, I have been hooked. Darren is also responsible for the amazing digital magazines Atari Gamer and Atari ST Gamer. Recently he started a game publishing company called BitmapSoft. Read all about it in this in-depth interview.

Last week a nice package came in the mail. Finally, the 2 volumes of 'We Love Atari' made it to my doorstep. These books by Karl Morris ooze passion and a true love for Atari. I was so impressed by the depth and amount of historical detail found in these books, I just had to contact Karl for an interview to find out how it all started. 'We Love Atari' covers the history of the brand from 1972 till 1996. Karl is not new to the Atari scene, going back as early as 1998 when he created his first Atari website. Want to learn more about some of the greatest Atari-related literature? Look no further.