Today is a great day! We finally meet one of the first coders of the Replicants. You can't ignore this mythic crew, which hacked thousands of games on the Atari ST. They released cracks until 1992, but were mainly active between 1988 and 1990. The Replicants also coded a lot of intros, some demos and guest screens for megademos. Nicolas B. (aka Excalibur) was one of these coders. He is the man behind the Union Demo screen but also made his own game for the French bi-centennial.

1) The start in microcomputing
2) Joining the famous Replicants
3) The best screen
4) Good times
5) The members of the team
6) Activities on the Atari ST
7) Favourite software
8) The end of Excalibur
9) But about the Falcon?
10) Opinion on the Falcon
11) Current projects
12) ST emulators
13) New interests
14) Greetings! 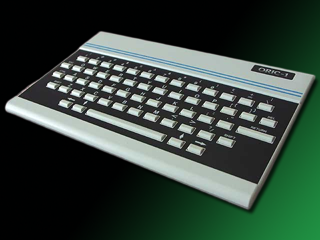 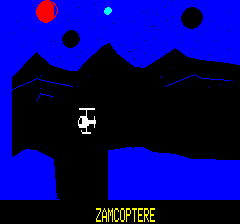 The game 'Zamcoptere' for the Oric-1 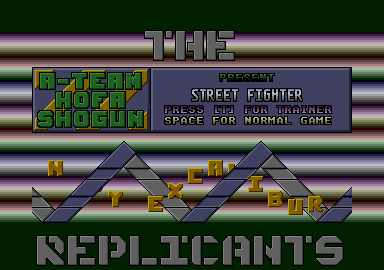 This intro was used for the game 'Street Fighter' (I personally love this one: I spent my time watching it in the early years, before I got into demo disks) 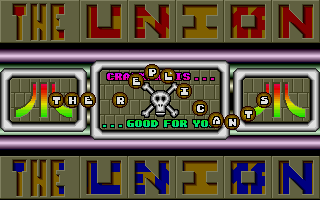 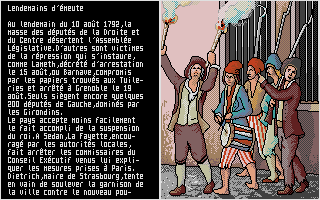 '89 La Revolution Francaise' was coded by Excalibur: it's probably one of the rarest games ever recovered 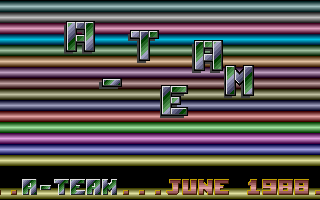 1) Hello Nicolas. What were your first steps into the world of computers?
My father taught me some BASIC on a programmable calculator - a Casio FX702P. I was 10 years old. Then, my parents bought an ORIC-1 for the family. I adopted it immediately. I was still learning BASIC, 1983 it must have been. When I was 14, I coded a small adventure game on MB-5 at my high school. The goal was to teach the Highway Code to teenagers. My science teacher and myself won a contest organised by Le Havre City Hall with it. The prize consisted of the computer material for our school establishment. I myself won a 36cm TV!
This TV allowed me to continue to work in my own room, so I didn’t need to take over the TV in the living room anymore. A friend shared his knowledge on the 6502, he also offered an algorithm that generated random labyrinths. During the holidays in the summer of 1984, I integrated this algorithm into a game that I wrote in assembler - some kind of Pac-Man clone that took place in a gigantic labyrinth. One of my brothers wrote the music. The game was called Zamcoptere: it was published by the weekly Hebdogiciel. As it was voted best software of the month by readers, I won a prize of 20,000 Francs (3,050 €). I bought an Atari ST with this money amongst other stuff. It was a dream machine at the time. One megabyte of memory was just insane!!

2) When did you join the a-Team/Replicants?
In 1986, I began learning the 68000 and GFA BASIC. I read some books as "Au coeur de l’Atari ST” (Inside Atari ST). Naturally, I myself made some friends with other programmers from the ST scene around the Normandy area. One of them asked me to code demos, which I then did. I became a member of the A-Team because of it. When we joined forces with the Replicants, we became a nationwide group. I don't remember when it started exactly as I didn't manage the group.

3) So you were one of the coders of The Replicants. Which screen is your best one?
Without hesitation: the screen that was part of the Union Demo in January 1989. My graphic designer and artistic creator Rank-Xerox did a terrific job. The Replicants logo dances over animated multi-coloured tubes. In the background of the screen there is a wall plate on which a skull is drawn. On this plate, our motto is written which became very notorious and well-known: "Cracking is good for you." A transparent scroller parades at the bottom of the screen.

4) What are your most precious memories of The Replicants?
I remeber a demo/coding party organized in northern France, it was amazing. It gave me the opportunity to meet other coders from northern Europe, especially from Germany. They were brilliant people. At the occasion I had an interview also with a team from Bonaldie/Canal+ (French TV). I was 17 years old and I wore a mask for the camera whilst speaking in a microphone. It was terrific, I had great fun.

5) What can you tell us about the other members? What kind of relationship did you have with them?
I had an excellent relationship with the team. We had the best swappers & crackers.

6) Did you take part in other groups after the Replicants?
No. I worked freelance for a software publisher. I notably participated in the development of an educational game about the French Revolution. It was published in 1989 for the French bi-centennial.

7) Which was your favourite software?
Assembler, C compiler, GFA Basic, Time Bandit and a role-playing game of which I don't remeber the name.

9) Have you ever been interested in the Falcon?
No, unfortunately I didn't have the time anymore for those kinds of things. My new student life took all of my time.

10) How do you look back on this machine?
I don't have an opinion on the Atari Falcon. All I can say is that at this time the microcomputing industry began to represent a lot of money. The choices of the users were not only technical but became more political. It marked the end of an interesting period. A period where people used their machine to play, to learn and to create. Purely for the pleasure of it, like owning a musical instrument or a sailboat.

11) What are your computer projects at the moment?
I live in the United States, I am a data processing engineer for real time surveillance and control systems. Before leaving France, I developed the software installed in the automatic signalling system that controls the movements of the TGV on the new Lyon-Marseille line - a claim to fame!
In my spare time, I am interested in theoretical data processing; the formal methods, the synthesis of programs from a specification, the demonstrators of automatic theorem, etc.
It is a difficult part where there is a lot to learn & create. Molière studied philosophy before writing some plays, in the same way it is important to really master the mathematical models, to be able to write some new innovating software.

12) Did you have the opportunity to test the ST emulators (Steem, SainT, WinSTon, etc.) ?
Yes, I used SainT to run the Union Demo on my PC. It works well. It helped me to re-discover the code that I had created 17 years ago! A good part of my demos are on the ftp.jussieu.fr server of the Pierre and Marie Curie University where I did a part of my studies. That’s very cool!

13) Which are your interests today? (passion, leisure, sport, etc.)
I study music, I'm taking courses in singing and guitar playing. I also did some theater courses: I played in two pieces of amateur dramatics in Paris. I read quite a lot of books, French and American literature and I travel.

See you soon, and thank you for everything!