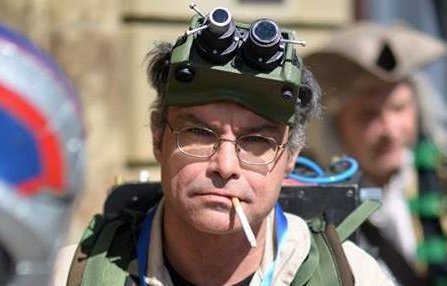 Straight after the release of the 'new' game Red Ace follows an interview with the creator of this long lost classic. Tony Goacher was a software contractor for Red Rat software in the 80s, and as a fan of the classic Psygnosis game Barbarian, he wanted something similar but with a little sci-fi twist to it. Read all about it in this great interview!

1)Hi Tony, could you introduce yourself to the people who haven't heard of you before?
Hi, my name is Tony Goacher. I worked as a freelance programmer for Red Rat Software on 8-bit and 16-bit Atari platforms in the 1980s. I was responsible for the development of Red Ace on the ST.

2)What were your first steps into the world of computers?
I started out on an acoustically coupled teletype at school, then progressed onto the CP/M machines that they got a few years later. I got my first personal computer in 1978.

3)Which computers did you own during all those years?
First was an Ohio Superboard 2 (24x24 monochrome character display!) followed by an Atari 400, then Red Rat got me a trade price on a 1040ST in 1987.

4)Why did you want to program games?
I grew up with Space Invaders, Pacman etc. I got the Superboard 2 because it had tanks and planes in the character set. I enjoyed games and it was quite difficult to find (or afford) commercial game software. So I taught myself to program and wrote my own.

5)You made games for the Atari 8-bit computers, would you please tell us a bit about them?
I wrote several games for the 8 bit Ataris. Freaky Factory, War Copter and Death Races were marketed by Red Rat. I also attempted (unsuccessfully) to market some games myself through the 8-bit magazine, Page 6.

6)After the glorious 8-bit era was over you were contracted by Red Rat to make a ST game. The result was ”Red Ace”, what inspired you to make this game?
I really enjoyed Barbarian (Psygnosis) but I preferred futuristic games. I came up with the idea for a multi room, multi weapon game and presented to Red Rat. They were on the look out for 16-bit titles at the time and they commissioned it. Compare the Barbarian and Red Ace characters. They are very similar.

7)Why the title "Red Ace" ... Did you have to pick it cause it was to be released by Red Rat?
Yes. They chose the name. They paid up front so they called the shots!

8)How was coding the ST compared with 8-bit coding? More rules to follow and different tools to program with?
16-bit coding was a joy! The 6502 has 3 8-bit registers and the 16-bit addressing is restricted to 256 byte pages (without interaction), so being able to access 64K with a single register was great. The basic principles of assembler coding still hold true though, so I found it quite easy to code 68000.

9)What development tools did you end up using to code with?
I used Devpac ST on my 1040ST with twin floppies. It was a bit slow to build the entire game but it worked quite well.

10)How did you end up in league with Red Rat? And how were they to work with?
I got involved with them when they marketed Freaky Factory for me. I used to go to the Manchester Atari Computer Enthusiast meetings and one of the guys from Red Rat went there too. He saw what I had done and asked me to come in and talk to them.

11)Why didn't you go to another distributor when it went downhill with Red Rat?
The ST market seemed to be dying, and I was finishing my diploma at a polytechnic. As I was under no pressure to finish it, I concentrated on my studies and by the time they were finished I had little enthusiasm for re-starting the project for a slow market.

12)Apart from Red Ace did you ever work on any other Atari ST projects?
No. Red Ace was my one and only 68000 project.

13)Have you created games for other systems/consoles as well?
No. Although I now work for the world's largest manufacturer for gaming (gambling) machines doing video products on the PC.

14)What is your all time favourite computer game?
Favourite ST game: Xenon. Favourite game of all time Medi Evil on PS1.

15)What do/did you think of the Atari ST in general, compared to other machines?
A superb machine. In my opinion it lagged behind the Amiga in sound and graphics, but it spawned the home MIDI computer sequencing industry that we know today with products like Cubase.

16)What is your favourite system?
Got to be the PC. Standardisation has worked wonders for the computer industry. Costs have been lowered through mass production which is good for everyone and software for one system is pretty much guaranteed to work on another. I remember looking with envy at some Amiga games and thinking 'if only I could play that...'.

17)Any future Atari ST coding ventures planned?
No... I'm too busy with current projects to consider starting any more!

18)If so, would you need any help with any sound or graphics? We know plenty of willing people who'd like to help!
Really... I'd love to but ......

19)Would you like to share something else with us? Some final thoughts? Greetings...
I'd just like to thank everyone at Atari Legend for keeping the ST memory alive. Superb work! Please keep it up.

The main title screen of Freaky Factory. One of Tony's ventures on the 8-bit Atari machine. 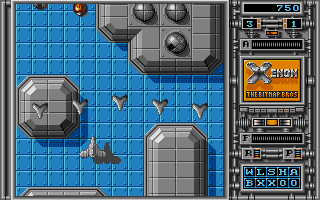 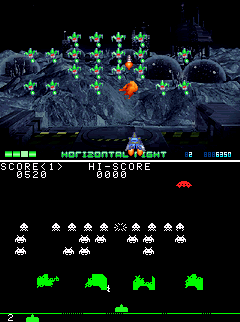 Check it out, classic Space Invaders vs a new Gameboy Advance version. 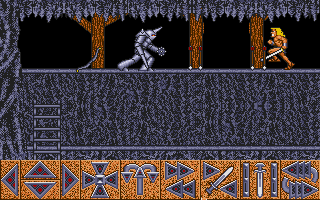 Barbarian as the main source of inspiration in the creation of Red Ace, according to Tony! 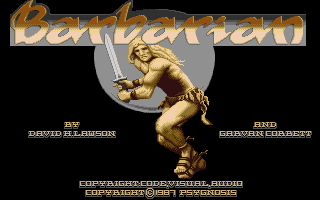 The main title screen of this Psygnosis classic.

Today, we had the chance to talk to Orion, the second person we interview from the famous Replicants group. But there is more, Sébastien was also a member of Fuzion. These days he is very active in the scene and lately he was responsible for releasing the obscure Son Shu Shi, a game thought to be lost in time. If you want to learn more about the French cracking scene in its hay days, this is something for you.

Son Shu Shi is an obscure platform game that was thought to be lost in time. The ST scene only had a corrupt version. Until today. With the imminent release of this classic it was time to get in touch with its creators and test their memory. This is a tale of two Belgian brothers who got bored of constantly playing games, so they switched sides and started creating them. And luckily for us, their machine of preference was the Atari ST.

When I witnessed the first ever glimpses of a technique called Voxel Space, my jaw dropped to the floor. That was in 1993, on a friend's PC, and the game was called Commanche : Maximum Overkill. Little did I know, that this was also possible on an Atari ST. And when reading the thread on Atari-Forum about a possible new game for the Atari family of home computers called Vergeworld : Icarus Rising, I had to get in touch with the guys from Retrobones to learn more. Excited yet? Check this out.