Eddie made a bunch of menus disks for various crews: Automation, Pure Energy, New Order and The Guardians of Logik. He used to be known as The Bald Eagle and also released some compilations with his nickname only. Here is an interview with the very popular TBE!

1) Hello TBE. Glad to do an interview with you. Could you introduce yourself (passion, age, job,...)?
Passion is computing and football (Manchester United). Lets just say I am over 40 now. I run my own company as a Business Analyst.


2) What was the first computer you bought?
First computer was a Commodore 64, followed by the Atari ST. I always wanted an Amiga so bought one of these for my wife's birthday (went down well) and now happily on the PC.


3) When did you begin to release compilation disks on Atari?
A long time ago now but I would guess around 1987-88


4) Where does your nickname come from?
Lets just say I was always follicly challenged.


5) Was New Order your first crew?
No, I released some for The Guardians of Logik (GOL) before they joined Automation and I did not want to. Along with New Order I also released some TBE menus.


6) Then you joined Automation?
I was asked at a computer show in London by The Mob and Vapour to join Automation. I think they only wanted to kill off the competition as New Order were releasing the games quicker than they could.


7) What was your main job for Automation? Which pack/crack are you the most proud of?
I did some of the packing and menu compilation for them. I dabbled with 68000 and did do the odd menu of my own. I don't have any favourites as I enjoyed them all.


8) Which programs did you use?
The usual packers and GenST for coding.


9) I've heard some rumours that you joined Awesome. Is that true?
I used to speak to Jimmy (James) but I do not remember ever joining them. I'm getting old now and the memory could be fading.


10) When did you leave Automation? Why?
When we got the 500 it just seemed to be a chore and I decide to buy a PC instead.


11) Then you joined Pure Energy. Why did you stop after PE experience?
I got bored with it all, too much work for little reward, plus the software was drying up.


12) Are you still in contact with old members of New Order, Automation or Pure Energy?
No.


13) Did you see the latest releases of D-Bug (considered as Automation's children)?
I used to get them from Rob (Vapour) at the start but as stated I got the PC and sold the Atari ST.


14) What's your current project?
No projects now. My son is at college and I am helping him out with his Visual BASIC work.


15) Some last words to add?
It was a great time back then with some people taking it far too seriously. A lot of the slagging was for real but some was tongue in cheek. It's good to get some decent ST emulators on the PC to relive some of the moments.

Thanks a lot TBE. It was a big surprise to receive an email from you! 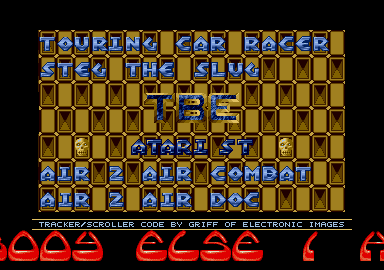 This TBE menu was coded by Griff and features a brilliant mod tune. 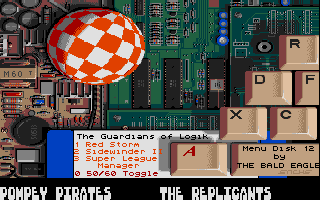 The Guardians of Logik were very inspired by Amiga? See issues 11 and 12. 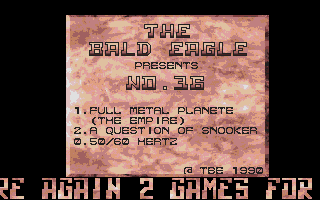 Another menu made for the Guardians of Logik. 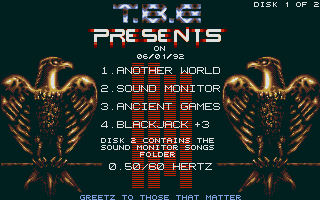 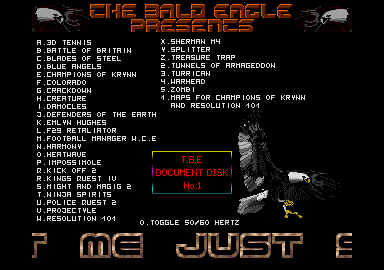 Did you notice Eddie published a doc disk, too? 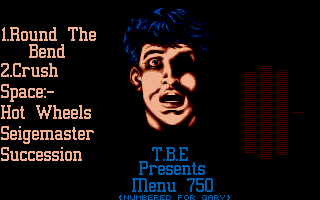 The Magnetic Fields' classic Lotus Turbo Challenge was recently enhanced and released for the Atari STe. This has taken the scene by storm and even impressed the Amiga community. This version of the game was programmed by Jonathan Thomas, with the help of Jamie Hamshere. Jonathan had done a similar thing in the past with the release of Pole Position STe, and Jamie did a great update on the classic Droid. But today we are talking Lotus and as a complete coding NOOB I tried to ask deep technical questions ;-) If you are interested in the making of this amazing release, look no further...

Today, we had the chance to talk to Orion, the second person we interview from the famous Replicants group. But there is more, Sébastien was also a member of Fuzion. These days he is very active in the scene and lately he was responsible for releasing the obscure Son Shu Shi, a game thought to be lost in time. If you want to learn more about the French cracking scene in its hay days, this is something for you.

Son Shu Shi is an obscure platform game that was thought to be lost in time. The ST scene only had a corrupt version. Until today. With the imminent release of this classic it was time to get in touch with its creators and test their memory. This is a tale of two Belgian brothers who got bored of constantly playing games, so they switched sides and started creating them. And luckily for us, their machine of preference was the Atari ST.