Score
-/5
Please log in to vote
No votes yet - be the first!
Developer
Non-Commercial 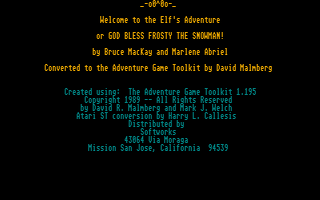 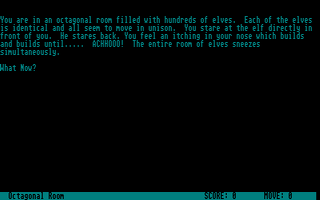 [no date] by Non-Commercial

bmackay
"Elf's Adventure" was originally titled "Elves'87". Marlene and I wrote it in ADVSYS just in time for Christmas 1987. It had no sound or music - in fact I was rather shocked (horrified?) to see a musical version posted. We wrote it on the Atari ST 1040 so we embed some VT52 commands which weren't very cross-platform friendly. It did work in a version of Advsys that we hacked up a bit to run in Citadel BBS however, which was our primary goal at the time. It was all very campy and although it took it many hours, it was all for fun and very tongue in cheek.

We had plans for a serious project based around Incan legend, but our lives became very busy shortly after we released Elves'87. We kept researching for the next project, and never really gave up on the idea until we lost Marlene to a brain aneurysm almost exactly 10 years after releasing Elves. Perhaps the highlight of releasing Elves was getting a very unexpected phone call from Neil Harris, Marketing Director for Atari. Since we were in Darmouth, NS, Canada, getting a call from Neil was as unexpected as if Santa had dropped down the chimney. Following the release of Elves, I was invited by David Betz to become a moderator in the BIX Advsys forum. I really have to look back and laugh now. It used to cost me $32/hr to dial in over 1200bps modem to a long distance line in Boston - provided I waited until after 11:00pm to dial in.

Ah, those were the days - had to walk up hill through eight feet of snow in my father's old boots...

We miss you Marlene. The dream of INCA lives on.