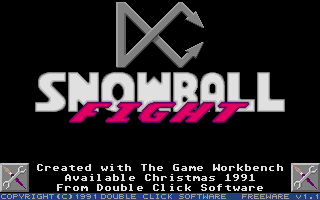 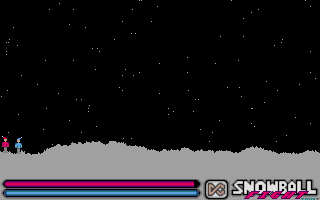 dmbaggett
I wrote this in a weekend as a Double Click "program of the week". It's meant to demo Game Workbench, a game development library the Double Click licensed from me and Neil Forsyth. Game Workbench was really neat, but it came way too late: even I had already switched to a 486 PC by the time it was ready for release.

I actually ported Game Workbench to the PC and to X Windows, but by then I was too busy with grad school to do anything commercial with it. In retrospect, Game Workbench was a forbear of the current crop of Flash 2D game toolkits.

Snowball Fight is actually a lot of fun. It's a two-person game where you play kids wearing parkas. You can pick up snow by ducking down -- the more you duck down, the bigger your snowball gets. The controls are akin to a ballistics simulation -- you hold the button and move the joystick to pull your arm back, then release the button to throw your snowball. The physics are pretty accurate, taking into account the snowball's weight, your throwing angle, and the wind (which varies randomly).

Snow falls and accumulates over time. Unlike the 8-bit Atari version which inspired my implementation, there is a limit to how much snow can accumulate. In the 8-bit version, if you left the game on overnight you'd come back to a screen full of snow.