Score
-/5
Please log in to vote
No votes yet - be the first!
Developer
Spiral Mile 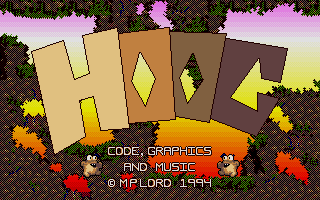 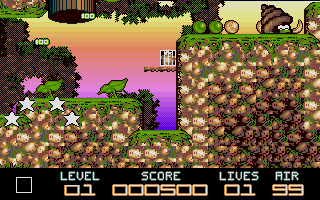 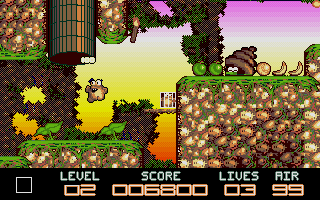 bullis1
This is an amazing game in almost all aspects. The parallax backgrounds are very impressive for the ST, and there's usually lots of colour on screen. The coding on this game is very very well done except for some collision detection issues that sometimes arise when holding balloons, or releasing balloons too close to a wall. The controls are very tight however.

The artwork and animation are nice. The way the main character bounces around is especially cute. There aren't really any sound effects, but there is some repetitive music that sounds like it only uses two of the YM2149's three channels.

The gameplay goes like this: You are what I assume is called a "Hoog" and you have to try and rescue the baby "Hoogs" that are trapped in cages around each level. You must fill balloons at the helium tank, and bring the balloons to the baby Hoogs and carry them back to the entry tube and release them into it. Sound confusing? It is a little odd at first, but it quickly becomes natural. The best strategy is to scout around the level first, without releasing the baby Hoogs. This way, you can check out the safest paths and see where all the switches, springs, ponds, and other assorted puzzle elements are. The level ends when you either rescue all the baby Hoogs, or let them die. Then, an escape rope lowers from the entry tube and allows you to exit. You must try to rescue as many baby Hoogs as possible in order to meet the end-of-world quota.

Oh, and of course there's plenty of fruit lying around that you can grab to increase your score.

This game takes elements found in traditional side-scrolling games such as platforms, fruit collecting, cutesy characters, and baby rescuing and spins them into a highly original, humorous, challenging, and fun romp. I highly recommend it!