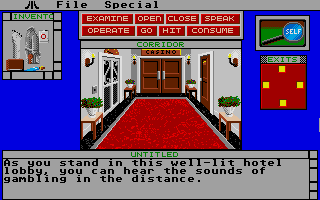 This is a 1989 release of Deja vu 2 - Lost In Las Vegas. It was released in France, Germany, United Kingdom, published by ICOM Simulations, distributed by Mindscape. Its license is commercial.

The following languages are supported: English.

It requires a minimum memory of 512 KB.