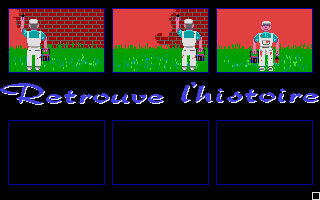 This is a 1990 release of Retrouve L'Histoire. It was released in France, Germany, Italy, Spain, United Kingdom, published by Carraz Editions. Its license is commercial. It is also known as Find the story (English), Ordne die Geschichte (German), Retrova la storia (Italian), Encuentra la histora (Spanish).