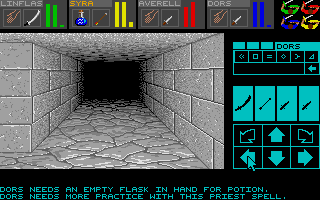 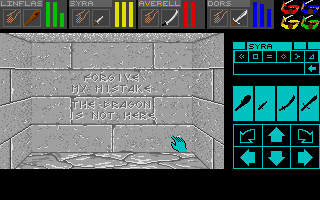 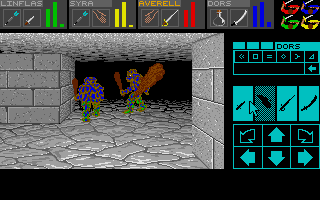 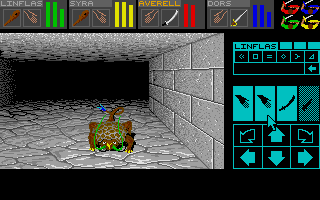 dungeon.master
This second data disk is made using a custom dungeon made by :

the dungeon was first made to be used with Dungeon Master for PC.

June 22, 2005
Marcer
STORY :
Hello.
I'm Old Grey Lord.
Great King Hissssa is dead. After his victorious fusing of Black Chaos, he has been chosen to be the King of Viborg. But today, he has died. After this last adventure, I came away from Viborg, with my apprentice Boris, to the town of Baldor. To forget all those crazy things. Beowulf and Karybde followed us. But Hissssa stayed and became a King.
But he has died. Before losing him, he told me and his former mates to come back, and to dig the mountain a great palace for his (and our) glory. Perhaps I was stupid, but I accepted.
I digged the mountain, helped by the strength of Karybde, the skill of Boris, and the will of Beowulf.
But there has been an earthquake. King Hissssa had an old foe, King Dragon, who lived under the mountain. He invoked an earthquake. The palace was heavy and well designed. Only a rock fell from a wall. On King Hissssa's head. Now he's dead.
And King Dragon invaded us, with his army of monsters. He stole all my keys, he locked me up in the deep of the palace. He definitely mirrored my friends and some other heroes on the top of the palace.

You're the only one who could help us, Theron.