Score
-/5
Please log in to vote
No votes yet - be the first!
Authors
Jochen Hippel
aka. Mad Max
Music
Heracles
Programming
Genre
Board Game 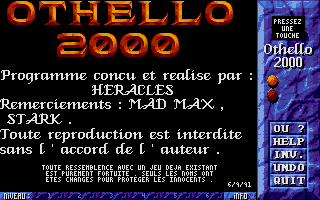 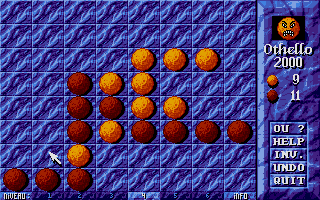 bullis1
This is a pretty good human-vs-cpu othello game. It is difficult to beat the computer, which is a good thing. It has better graphics than any competing othello game on ST as well (which isn't necessarily saying much). The music ripped from mad max is good, but you never get to hear one song for long because it switches whenever it's the other player's turn. This was a nice idea by the coder but it gets annoying.

Anyway, it's got the addictiveness that an othello game needs so if you like that sort of thing I suggest you track this down.