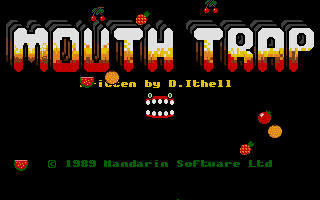 AndyHovine
Mouth Trap came bundled in the Games Galore pack with three other games and a utility called STOS Squasher.

All the games were written in STOS, a game BASIC programming language and came with source code on the second side of the disk.

Mouth Trap was written by Darren Ithell who also had a hand in the development of the Squasher utility according to the manual that came with the pack.

The goal of the game is to eat all the food on a level. Insperation is aparant from games such as Bubble Bobble but parallels with popular arcade games are also present. Although later levels become frustrating and at times seem like filling the gaps, the early levels are fun, well designed and offer enough to discover to want to get that bit further.

With a variety of germs, food, level graphics and layout there's a lot there to play though and the gameplay is works well with the adictive qualities needed to want to come back even if it does get frustrating at times.

Well worth a look at if you've never played this game before.